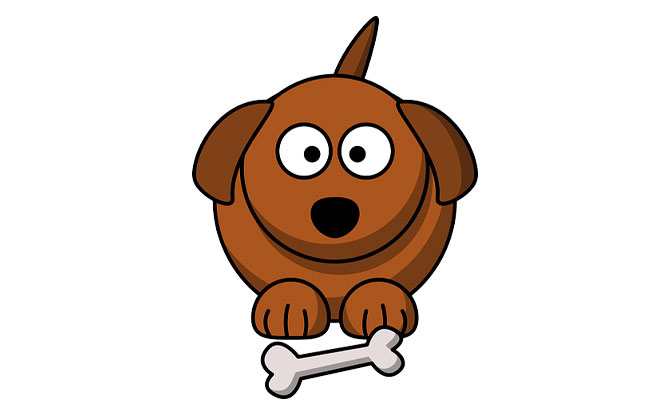 We know them as man’s best friend, but dogs are also pretty entertaining animals. If you know a good boy or girl looking for a good laugh, here are some dog jokes that you can share with them to get the tails wagging!

90+ Dog Jokes To Get Tails Wagging 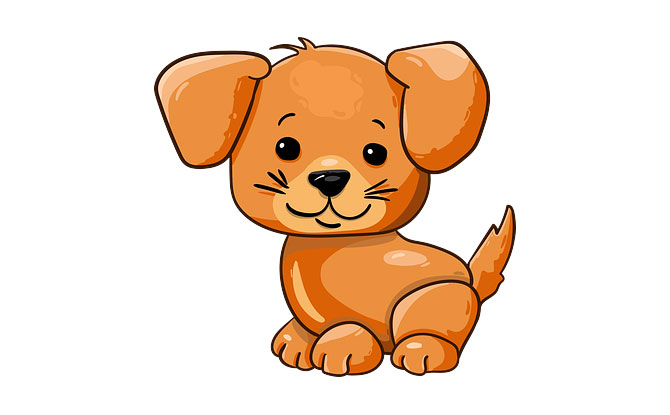 1. Which dog always knows what time it is?
A watchdog.

2. What do you have if you breed a cocker spaniel with a poodle and a rooster?
A cockerpoodlepoo

3. What kind of dog is the quietest sleeper of all?
A hush puppy.

4. Why did the Eskimo name his dog “Frost”?
Because “Frost” bites.

5. How do you stop your dog from barking in your front yard?
Put him in your backyard

6. Why is a noisy yappy dog like a tree?
They both have a lot of bark.

7. What do you get if you cross a gold dog with a telephone?
A golden receiver

8. Why can’t you tell knock knock jokes to a dog?
When you say “Knock knock”, the dog will respond with “grrrr, woof, woof, bark, bark, bark”

9. How does a Japanese chihuahua say hello?
Konichihuahua

10. ​What did the Dalmatian say after he ate his yummy dog dinner?
MMM, that hit the spots.

11. Why aren’t dogs good dancers?
Because they have two left feet

12. What do puppies and pages of a book have in common?
They’re both dog-eared.

13. What kind of dog likes taking a bath?
A shampoodle

14. What do you get when you cross a Rottweiler with a hyena?
I have no idea, but if it starts to laugh, I’m joining in.

15. What kind of dog chases anything red?
A Bulldog.

16. Why did the two-legged dog to come to an abrupt halt?
It had two paws.

17. Why do dogs bury bones in the ground?
Because you can’t bury them in trees

18. Why did the mother flea feel so depressed.
Because all her kids were going the dogs.

20. What do you get if you cross a sheepdog with jelly?
The collie wobbles

21. What do you call a dog magician?
A labracadabrador.

22. How can you be sure that you have a slow dog?
It chases parked cars.

24. What do you call a dog that is in a submarine?
A sub woofer.

25. How are a dog and a marine biologist alike?
One wags a tail and the other tags a whale.

26. What happened when the dog went to the flea circus?
He stole the show

27. Which dog breed loves living in the Big Apple?
A New Yorkie.

28. Why didn’t the dog want to play football?
It was a Boxer.

29. What do you get when you cross a dog and a calculator?
A friend you can count on.

30. Why do dogs tend to run in circles?
Because it’s really hard to run in squares.

31. What is it called when a cat wins a dog show?
A Cat-has-trophy

32. What could be more incredible than a talking dog?
A spelling bee.

34. What did the skeleton say to the puppy?
Bonappetite

36. Where do dogs park their car?
In the barking lot.

37. What kind of dog does Dracula have?
A bloodhound

38. What did the man get who tried to cross-breed a computer with a dog?
Too many bites to handle

39. What happens when a dog loses its tail?
It goes to a retail store to buy a new one.

41. What did Darth Vader’s dog say to Luke’s dog?
Come on! Join the bark side.

42. What do you call a dog magician?
A labracadabrador.

43. What do dogs owned by chemists do with their bones?
They barium.

44. What kind of dog consumes food with its ears?
All of them. I haven’t seen a single dog remove their ears before digging in.

45. What would happen if you crossed a dog and a cheetah?
You’d get a dog that chased after cars, but was actually fast enough to catch them

46. What does a dog and a phone have in common?
They both have collar I.D.

47. What breed of dog can jump higher than a building?
All breeds can, since buildings can’t jump

48. When you cross a sheepdog with a rose, what do you get?
A collie-flower

49. How did the little Scottish dog feel when he saw a monster?
Terrier-fied

50. What kind of dog keeps talking about his problems?
A complaint Bernard.

51. Where does a Labrador’s food go before it can be sold in stores?
To the lab for testing.

52. When you put oil on a racing dog, what do you get?
Grease Lightning

53. Why are dogs’ barks so loud?
They have built-in sub-woofers.

54. What do dogs do after they finish obedience school?
They get their masters.

55. What do you call a sleeping untrained dog?
Whichever you want, but do it silently.

56. What is a pug’s favourite fall beverage?
Pug-kin spice lattes.

57. What do dogs usually like to eat at the movie theatres?
Pupcorn

58. How many hairs are in a dog’s tail?
None, They are all on the outside.

59. When you cross a frog with a dog, what do you get?
A croaker spaniel.

60. What do you call a dog getting its hair washed?
A shampoodoodle

61. What do you get when you cross a dog and a ballpoint pen?
Ink spots.

62. What could be worse than raining cats and dogs?
Hailing taxis.

63. What makes a businessman different from a hot dog?
The businessman wears a suit, but the dog just pants.

64. What type of markets do dogs avoid?
Flea markets

65.  Why aren’t Corgi jokes funny?
All of them are really short.

66. What is the most boring type of dog.
A dullmation

67. What do you get when you cross a dog and a lion?
You’re not going to get any mail, that’s for sure.

68. What kind of dog designs its own dog house?
A barkitect.

69. Why did the man make pancakes for his dog?
His dog sure didn’t know how. 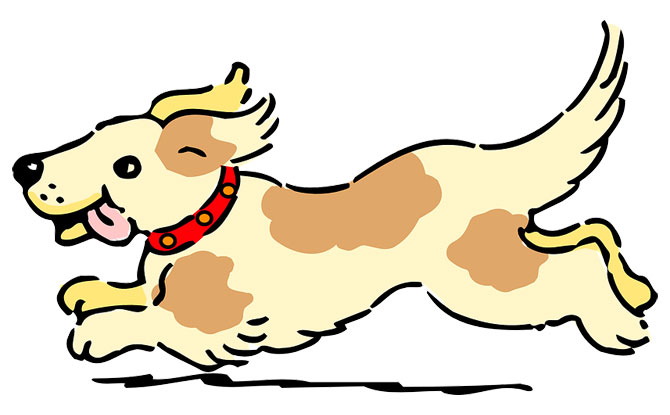 Aren’t dogs the best? Tell these fun jokes to a dog lover and they might be begging for more after.

70. My husband just told me I should name my next dog Peeve.
So I can tell everyone, “This is my pet peeve.”

71. Why are dogs unable to get an MRI scan?
Because only CAT scan.

72. I recently planted a pet tree, and it’s like having a pet dog except…
The bark is much quieter.

73. The World Health Organization announced that dogs cannot contract COVID-19. Dogs previously held in quarantine can now be released. To be clear, WHO let the dogs out.

76. Husband: It is raining cats and dogs now
Wife: That is ok, so long as it doesn’t reindeer.

77. Every single day I have a German Shepherd come and take a dump on my lawn in the morning. Today he even brought his dog with him!

78. Yesterday I spotted an albino dalmatian. It was the least I could do for it.

79. I named my 2 dogs Rolex and Timex. They are my watchdogs.

80. I bought a dog from a blacksmith when I got him home he made a bolt for the door.

81. Did you hear about the dog who was fined for delivering puppies on the side of the road? She was given a ticket for littering

82. Policeman: “Excuse me Mr, but were you aware that your dog has been chasing a guy on his bike”
Dog Owner: “Are you mad? My dog is not even able to ride a bike”

83. ​A man is extremely upset when his dog runs away.
His wife says to him “Why don’t you put an ad in the paper?” The man thinks that this is a great idea so he proceeds to do so. There was no response after a few weeks. His wife asks him “What did you you put in the ad for our missing dog? The man replies “here boy.”

84. Man: Our dog is such a good, clever boy dear. He brings in a newspaper every day
Wife: I guess that is pretty clever
Man: Yes, especially when we have never signed up or bought a subscription to any.

85. I have stopped the dog from digging up the garden.
I confiscated his shovel.

86. Bruno the dog was watching a movie. Why did the movie keep stopping and starting? Because he couldn’t resist pressing the paws button.

87. A large number of dogs escaped the SPCA today.
Police are looking for leads.

88. It was the end of the day when I parked my police van in front of the station. As I gathered my equipment, my K-9 partner, Ace is barking and I saw a little boy staring at me. “Is that a dog you got back there?” he asked. “It sure is,” I replied. Puzzled, the boy looked at me and then toward the back of the van. Finally, he said, “What’d he do?”

89. What do you give a dog with a fever?
Mustard Its the best thing for a hot dog.

90. A woman called an airline customer-service desk asking if she could take her dog on board. “Sure,” the service desk person said, “as long as you provide your own kennel.” They further explained that the kennel needed to be large enough for the dog to stand up, sit down, turn around, and rollover. The customer got perplexed:  “I’ll never be able to teach him all of that by tomorrow!”

91. I tell ya, my dog is lazy. He doesn’t chase cars. He sits on the curb and takes down license plate numbers.

92. Two dog owners are arguing about whose pet is smarter. “My dog is so smart,” says the first owner, “that every morning he goes to the store and buys me a sesame seed bagel with chive cream cheese, stops off at Starbucks and picks me up a mocha latte, and then comes home and turns on ESPN, all before I get out of bed.” “I know,” says the second owner. “How do you know?” the first demands. “My dog told me.”

93. I hide photos on my computer of me petting animals at the zoo in  a file named Fireworks and vacuums so my dog won’t find them.

94. A dog goes into a bar and orders a martini. The bartender says, “You don’t see a dog in here drinking a martini very often.” The dog says, “At these prices, I’m not surprised.”

95. After a talking sheepdog gets all the sheep in the pen, he reports back to the farmer: “All 40 accounted for.” “But I only have 36 sheep,” says the farmer. “I know,” says the sheepdog. “But I rounded them up.”

96. We’ve begun to long for the pitter-patter of little feet, so we bought a dog. It’s cheaper, and you get more feet.

97. As the stranger enters a country store, he spots a sign: “Danger! Beware of Dog!” Inside, he sees a harmless old hound asleep in the middle of the floor.
“Is that the dog we’re supposed to beware of?” he asks the owner.
“That’s him,” comes the reply.
“He doesn’t look dangerous to me. Why would you post that sign?”
“Before I posted that sign, people kept tripping over him.”

99. I went to a zoo but the only exhibit open was for a tiny dog. It was a Shih Tzu.