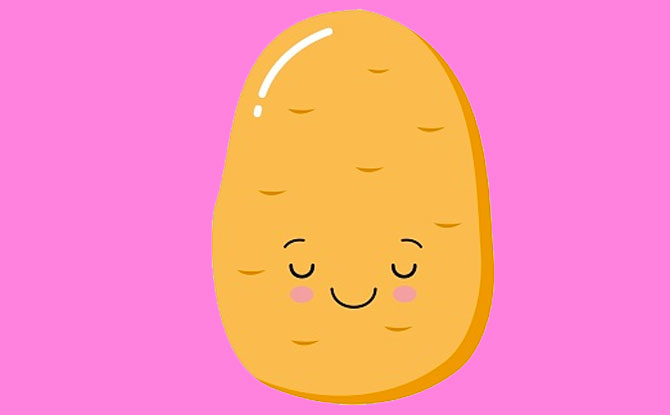 Not only are potatoes a versatile food, but they are also a great source of laughter…because there are so many jokes about them! Here is a list of family-friendly potato jokes that you can enjoy.

80+ Potato Jokes That Are Tater-ly Worth Laughing About 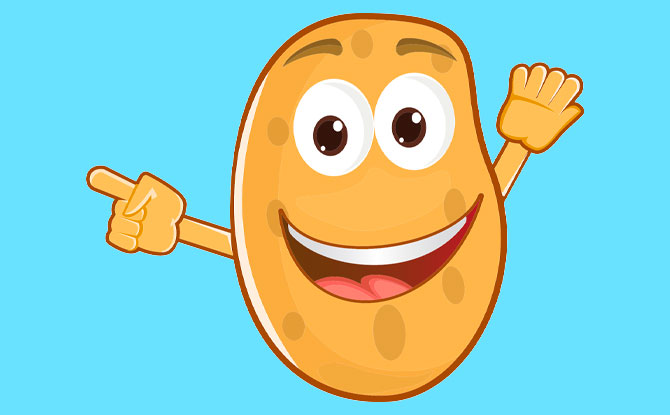 1. What do you call a potato at a sports game?
A spec-tater.

2. Which disease is the biggest killer of potatoes?
Tuber-culosis

3. What did the father potato say to his daughter before her football game?
I’m rooting for you.

4. What did the sweet potato say to the regular potato?
“I yam what I yam”.

5. What do you call a fake potato?
An imi-tater.

6. Why did the potato cross the road?
He saw a fork up ahead.

7. What’s a sweet potato’s favourite horror movie?
The Silence of the Yams.

8. Why was the chef’s favourite ingredient a potato?
They found potatoes very a-peeling.

9. What do you call a potato wearing glasses?
A spec-tater.

10. Why did the potato salad blush?
Because it saw the salad dressing.

11. Why didn’t the potato want his daughter to marry the news reporter?
Because he was a commen-tater.

12. What does a potato say on a sunny morning?
What a mashing day!

13. Why was the potato taken to a psychiatric hospital?
It was starch raving mad.

14. Why do potatoes make great detectives?
Because they always keep their eyes peeled.

16. What do you call a chip that makes fun of you for not known any potato puns?
A tater-taunt.

17. What do you call a potato jumping into boiling water?
A hesi-tater.

18. Where does the biggest potato grow?
Under the ground.

19. Why did the pie cross the road?
She was meat an potato.

20. How do you win the potato-hiding contest?
Ensure that your carbo-hide-rate is great.

21. What do you use to carry potatoes?
A tater tote.

23. What is bruce banners favourite kind of potato?
Hulk’s Mash!

24. What do you call a potato that’s spinning around?
A rotate-o.

25. Why does everyone love sweet potatoes?
They’re yammy.

26. What do you call two potatoes wearing the same thing?
Mashing outfits

27. What do you get when you put potatoes on the kitchen floor?
Mashed potatoes.

28. What do you call a potato that’s always looking for a fight?
An agi-tater.

29. What do you call a monkey that sells chips?
A Chipmunk.

30. What do you call a millennial who eats potato chips?
A chipster

31. What do you say at a restaurant when they ask whether you want salad or chips?
I’m not taking sides.

32. What do you call a skateboarding potato that’s careful with money?
A Chipskate.

33. Which day of the week do potatoes dread the most?
Fry-day.

35. What happened to the potato on a date?
They had so many peelings

36. Why shouldn’t you give a zombie mashed potatoes?
Because they’re already a little grave-y.

37. What do you call baby potatoes?
Tater tots.

38. What do you call a potato after it’s been chopped up?
A chip.

39. What do you call a first aid vehicle made out of potatoes?
A yambulance.

40. Why did the sea monster eat twelve boats carrying sacks of potatoes?
Because nobody can eat just one potato ship.

41. What do you call a Potato that tells everyone what to do?
A Dictator.

42. Did you hear about that potato that had its head chopped off?
It was decap-potatoed.

43. What do you get when you put an elephant and a load of potatoes together?
Mashed potatoes!

44. Why can’t a farmer keep secrets on her farm?
Because the corn has ears, the potatoes have eyes and the beans stalk.

45. What’s a potato’s favourite song to dance to at a Halloween party?
The ‘Monster Mash’.

46. What do you say to a baked potato that’s angry?
Anything you like, just butter it up.

47. What do you call a good-looking french fry?
A hot potato.

49. What’s the difference between pea soup and mashed potato?
Anyone can mash potatoes, but no one can pee soup.

50. How do you know a potato is in a bad mood?
When they’re acting salty.

51. What do you call a lethargic baby kangaroo?
A pouch potato.

52. Why shouldn’t potato be a part of a square meal?
Because It’s a root vegetable

54. What’s the difference between a sweet potato fresh out of the oven and a pig flying out a catapult?
One is a heated yam and the other is a yeeted ham

55. How does a potato win at Street Fighter?
By mashing the kick button.

57. Did you hear about the root vegetable farmer that got arrested?
He beet up his friend with a potato and didn’t carrot all.

58. What is a potato’s life philosophy?
I think, therefore I yam.

59. What do you say when someone tells you French fries are cooked in France?
You say, “no they’re not, they’re cooked in Greece”.

60. What did the potato say to the other potato?
My love for you sprouts more and more every day!

61. What do you call a spud that always keeps its cool?
A medi-tater.

62. Why did the french fry win the race?
Because it was fast food.

64. What do you call potatoes with right angles? Square roots.

65. What do you get when you cross a tater with a race car? Crashed potato.

66. How did the burger propose to the fry?
With an onion ring

67. Why wouldn’t the reporter leave the mashed potatoes alone?
He desperately wanted a scoop.

68. What do you get after a potato rain storm?
Spuddles.

69. Why can’t a farmer keep secrets on her farm?
Because the corn has ears, the potatoes have eyes and the beans stalk.

70. What do potatoes eat for breakfast?
Pota-toast with jelly.

71. What do you call a potato who works as an EMT?
A resuscitater.

72. What did the bank robber french fry say to the potato cop?
“Just fry and stop me!”

73. Why couldn’t the potato get off the couch?
Because it was baked. 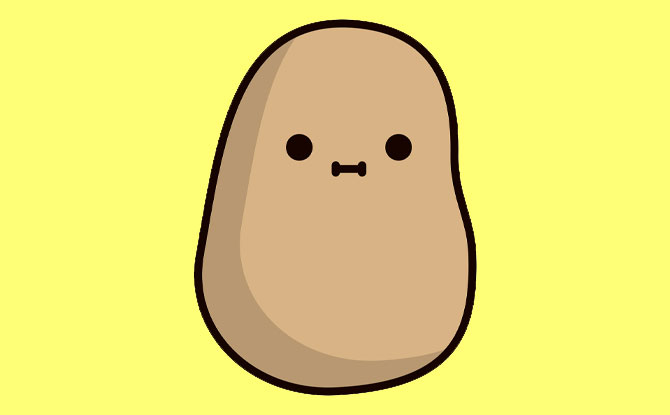 Looking for some funny puns and jokes about potatoes? We’ve got some sweet ones for you to enjoy.

74. A woman goes into a shop and asks if they sell potato clocks. The assistant says “Sorry, we don’t. We have alarm clocks, wall clocks, wind-up clocks… But I’ve never even heard of a potato clock.” The woman says, “neither have I, but I start my new job at nine tomorrow morning so my husband said I should get a potato clock.”

75. Saw some crisps strolling down the road and offered them a lift. “No thanks”, they said, “we’re Walkers”.

76. Looking for potato puns? You can always count on me to chip in.

77. I bought the potato at a chip price. I hope it still tastes good.

78. My friend has a job at the potato chip factory. He’s a Lay-borer.

79. An hour before 5 in the morning is the best time to cook a sweet potato. Because it’s For a Yam!

80. “How was your day?” The steak asked the gloomy potato.
The potato replied, “It was tater-ible.”

83. A restaurant put up a sign advertising their new ‘fat-free chips’. When a health-conscious woman ordered some and received a bag of chips dripping in oil she said, “hang on, those don’t look fat-free…”. “Yes they are”, replied the cook. “We’ve only charged you for the chips. The fat is free!”