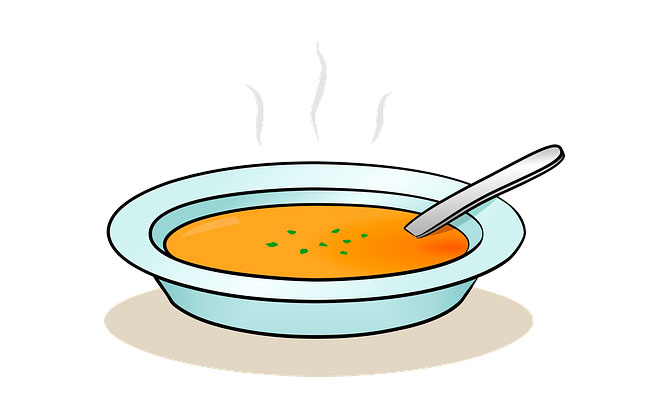 Spill some laughs over light-hearted jokes with these 60 plus jokes about soup that avid joke lovers are sure to slurp up. These jokes are great for family gatherings, parties or even just casual hangouts with friends. 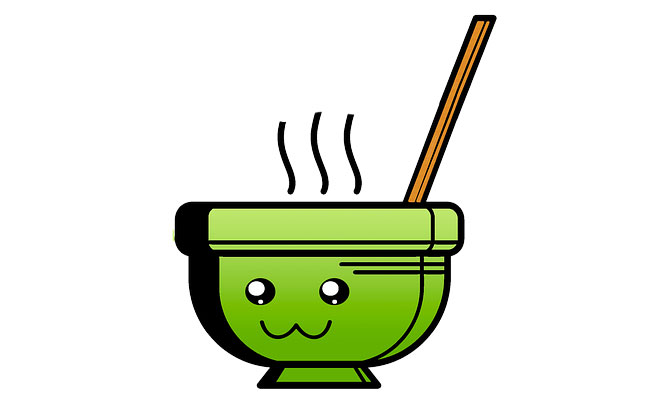 1. Why did the hipster burn his tongue?
Because he ate his soup before it was cool.

3. Is chicken soup good for your health?
Not if you’re the chicken.

4. What did the bowl of soup write on their Valentine?
I love you pho real.

5. What do you call a superhero who loves to have soup all the time?
Souper-man.

6. What is a ghosts favourite soup?
Scream of Broccoli.

7. How do you know when it is too cold to picnic outside?
You chip your tooth on your soup!

8. What is a vampire’s favourite soup?
Scream of mushroom

9. How did Reese eat her soup?
Witherspoon.

10. What do ducks have for lunch?
Soup and quackers

11. What do firemen put in their soup?
Firecrackers

12. Why did the person refuse to have the soup?
They thought the idea was stew-pid.

13. Why did the leprechaun turn down a bowl of soup?
Because he already had a pot of gold!

14. What’s did the ghost order on Halloween?
Scream of Tomato soup!

15. What font does alphabet soup use?
Times New Ramen.

18. How many beans does it take to make Irish bean soup?
Two hundred and thirty-nine. Because one more would make it too farty

21. Why was there an electric bulb in the soup pot?
The chef tried to make the soup a little lighter.

22. What’s the difference between roast beef and pea soup?
Anyone can roast beef.

24. What is the hometown of broth?
Stock-holm.

25. What do ducks put in their soup?
Quackers

26. What do you call overnight soup?
Cream of yesterday.

27. What’s the difference between a toilet bowl and a soup bowl?
If you had to think about it, I’m never having soup at your place.

28. Why was the soup was busy and preoccupied?
He was stewing over something his friend said.

29. What do you call ramen in spaghetti?
An impasta.

30. Why did the doctor prescribe the patient some alphabet soup?
For better vowel movement. 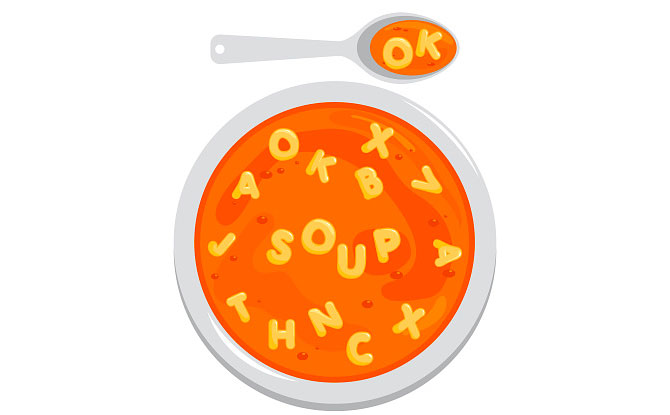 Soup is probably one of the easiest meals to have and one that many people enjoy. That’s why soup is also a popular topic for puns and one-liners. Here are some puns about soup.

31. My mom made me a bowl of soup yesterday
Still trying to figure out how to return to my human form.

32. I ate an expired can of alphabet soup. Now I have severe cramps in my vowels and I’ve been in-consonant all day.

33. My mum makes the best soups. She is a real soup-erstar.

34. When I asked my mum what she cooked for dinner, she replied saying “It is a soup-rise”.

35. My dad believes it is good to have soup before my meal. He is very soup-erstitious.

36. He refused to cook for his dinner date. I guess he is a hopeless ramen-tic

37. The best soup stock is made by boiling chicken feet for hours and hours
After all, it’s made from scratch.

38. The Japanese restaurant serves the best soups. It will always make miso happy.

39. Everyone says that the soup I cook for dinner has healing properties. I consider it to be my soup-er power.

40. This local restaurant serves all kinds of broth. It has a soup-erb menu.

41. When I took a break from having soup, my mom asked “why did you stoup?”

42. Miso Soup is the most self-aware soup.

43. When my sister asked me if there was enough dinner cooked. I told her “I cooked enough soup for the broth of us”.

44. The cook added some yeast to my broth yesterday. We were both soup-rised with the outcome.

45. He is the best chef in the city. His soups take my broth away.

46. I loved the soup that they served at the local restaurant yesterday. It was simply pho-nomenol.

47. I called in an order of wonton soup, but I guess they misunderstood me.
On an unrelated note, I’m opening a soup kitchen.

48. The supermarket did not have soups. They said they’re out of stock.

49. My mum told my dad how much I like her alphabet soup. She put words in my mouth.

50. I ordered two thousand pounds of Chinese soup. Technically, it was a won-ton soup.

51. I spelt “I take back what I said” in a bowl of alphabet soup so I could eat my own words

52. Went to dinner last night at a restaurant, and there was a fly in my soup.
I wouldn’t have normally minded, but the zipper broke my tooth.

53. Ever wondered when 24-hour cafes start serving the soup of the day?

54. Which hand should you use to stir the soup?
Neither, you should use a spoon. 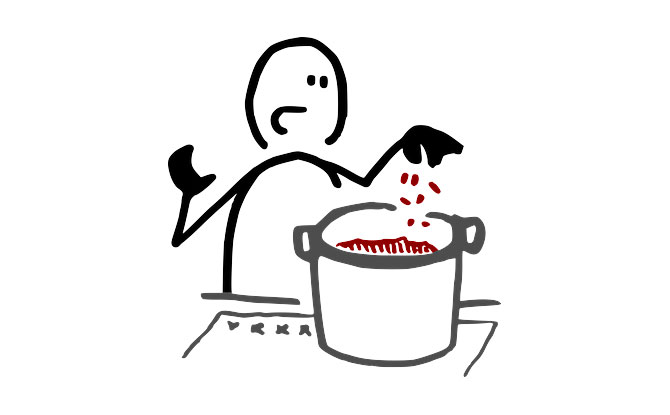 Got time for a good story? Here are some funny stories about soup that are sure to make you end up in laughs.

55. A boy asks his father, “Dad, are bugs good to eat?” “That’s disgusting — don’t talk about things like that over dinner,” the dad replies. After dinner the father asks, “Now, son, what did you want to ask me?” “Oh, nothing,” the boy says. “There was a bug in your soup, but now it’s gone.”

56. A customer asks the waiter what the soup of the day is
The waiter replies, “sage and onion.”
So then the customer says genonion

57. A man orders soup at the restaurant, but as soon as it arrives, it becomes apparent something is very wrong with his meal.
He flags down his waiter.
“Excuse me, waiter, could you please taste my soup?”
The waiter said “sorry sir we’re not allowed to do that. I will bring you another one.”
He started yelling at him and asked him to taste the soup.
The waiter was nervous by now so he told the man that “I will call the manager”
As soon as the manager arrives, he starts yelling at him and asked him to taste the soup.
The manager apologises and tells the same that it is not in their policy and he asks the waiter to bring another one.
But the man wouldn’t stop asking the manager to taste the soup.
Finally, the manager gives up and said, “ok. I will taste the soup. Please give me the spoon.”
The man said “exactly ”

58. A middle-aged man was sitting at a truck stop when three mean-looking bikers walked in. The first walked over to the man and stubbed a cigarette out in his soup. Then the second biker spat in the soup. Finally, the third biker picked up the bowl of soup and threw it on the floor. Without saying a word, the man got up and left. “He wasn’t much of a man, was he?” sneered one of the bikers to the waitress. “Not much of a truck driver, either,” she said. “He just backed his truck over 3 motorcycles.”

59. A couple had a baby. For 4 years he makes no sound, does not speak. Then one day the mother gives him soup, he says “This soup is cold.” The parents are amazed and ask “If you can talk, why have you not spoken before?” The child replies “Up to now everything has been satisfactory!”

60. A bird walks into a restaurant, orders and gets a bowl of soup.
After a minute, the bird angrily calls the waiter: “Waiter! There is no fly in my soup!”

61. Checking the menu, a restaurant customer ordered a bowl of vegetable soup. After a couple of spoonsful, he saw a circle of wetness right under the bowl on the tablecloth. He called the waitress over and said, “It’s all wet here. The bowl must be cracked.” The waitress said, “You ordered the vegetable soup, didn’t you?” “Yes,” he replied. “Well, maybe it has a leek in it.”

If you enjoyed these jokes. Here are some more jokes about hamsters and jokes for kids.