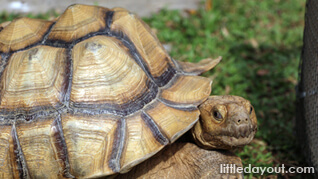 Found within Chinese Garden at Jurong, the Live Turtle and Tortoise Museum is a mini, private ‘zoo’ dedicated to turtles and tortoises. Its walled garden is home to more than 1,600 live animals and it is listed in the Guinness Book of World Records as having the largest collection of tortoise and turtle items.

Set up at Chinese Garden in 2002, the museum is the labour of love of a father and daughter team, Danny and Connie Tan, who have been collecting these animals for more than 40 years.

All manner of turtles and tortoises can be found in the Live Turtle and Tortoise Museum. For the most part, they are kept in tanks or pens, but you will even encounter some of the friendlier ones walking around freely among the grounds. Some species you can come face-to-face with at the Live Turtle & Tortoise Museum include the Alligator Snapping Turtle, African Spurred Tortoise and Pig-nosed Tortoise.

The landscape of the open-air garden is dominated by a murky green pond with dozen of terrapins around the edges. Spanning the pond is a wooden bridge with a little bucket midway across. For a dollar, you get animal feed from the bucket to placate the hungry reptiles in the pond. These turtles are obviously well-trained by visitors and the mere sight of a person lifting the lid of the bucket is more than enough to send them heading in a beeline toward the bridge.

While the turtles may look slow and lumbering, do take heed of the warning signs above the tanks. Some of these animals can get quite ferocious so keep little hands and fingers out of the pens, especially where it says “Danger”. 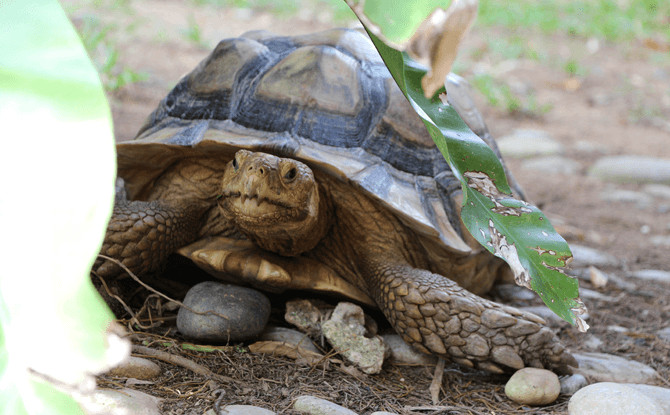 If you are wondering about the many signs saying that the museum is under video surveillance, it is because there was a break-in back in 2008 where a thief stole 18 endangered tortoises. Thankfully, the animals were tracked down and recovered but the museum is no longer taking any chances.

Displays at the Live Turtle and Tortoise Museum

On the way out, pause for a moment to look at the 4,000 turtle and tortoise artefacts on display. It is a Chinese belief that turtles and tortoises represent longevity and good luck.

The Live Turtle and Tortoise Museum is obviously the fruit of the owners’ passions and interests. If you go inside expecting to find a slick, large corporate outfit, you’d be disappointed. Instead, enter in to find an intimate and personal secret garden, and a chance to come up close with some fascinating creatures.

How to Get to the Live Turtle and Tortoise Museum

Click here to find out where the Live Turtle and Tortoise Museum is located.
Admission fees:
$5 for adults
$3 for children below 6 years old

Orchid Haven At Gardens By The Bay’s Cloud Forest: New Space With 1000 Orchids On Display