SRT’s Hare & Tortoise was billed as a “modern take” on the Aesop’s Fable of the same name. In truth, beyond the Hare and Tortoise-like characters and the fact that they were in a race, my almost-6-year-old couldn’t recognise any of the original fable we’d read in preparation for this production. But it didn’t hamper his enjoyment of what proved to be a delightful take on the tale.

Whereas Aesop’s Hare and Tortoise were pitted against each other, speedy Harri and steady Tatta (no prizes for guessing which is which here) are required to co-operate to win their “Amazing Race”.

The result? In modern parlance, the entertaining adventures of a couple of frenemies, ably played by the energetic Ching Shu Yi (Harri) and the unflappable Lauren Sim (Tatta), supported by the versatile Kris Natarajan as a one-man cast of colourful characters that the duo encounter on their journey.

The production explored the themes of overcoming prejudices, valuing differences and the notion that there are different ways of winning in the Race of Life. 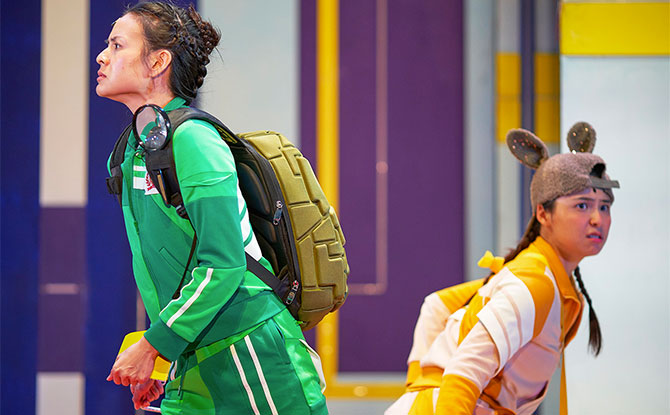 As with all good children’s theatre, these profound truths were made accessible to young ones in a performance that that lasted under an hour, and which engaged with plenty of audience participation and moments slapstick hilarity.

In a moving sequence where Harri helps Tatta overcome her fear of travelling through the tunnels of the mass rapid transit system, for example, the young audience is taken through the process of Harri first recognising Tatta’s fears, then accepting them, then empathising with her, before awkwardly extending a solution – the two focus on “counting the stops” hand in hand.

Also heart-warming were exchanges where the two protagonists articulated what it felt like to be themselves. With lines like Tatta’s “When things get too fast I can’t think” and Harri’s “When things get too slow I can’t listen”, playwright Kate Golledge has given children models to emulate, and a reminder that we parents would do well to listen to any attempts they make to describe their inner worlds.

As a mother, it was also particularly poignant to hear the voice of Harri’s mother repeatedly surface in her various self-descriptions – “My mum says I’m a winner” – a reminder that the way we speak to our children becomes their inner voice.

The conclusion however, while clever, was perhaps a little hard for younger ones to grasp. Spoiler alert: the pair find themselves at a construction site, precariously stuck on a beam balancing on a fulcrum, the physics of their situation metaphorically reflecting a truth in their relationship – that the way out is to move towards one another.

It wasn’t a “neat” ending as we’re apt to expect from children’s productions, but it did provide some interesting fodder for a post-show discussion.

Christmas Events In Singapore To Celebrate The Festive Cheer