River Safari, the newest attraction along a narrow inlet of the Upper Seletar Reservoir near Mandai, is Asia’s first and only river-themed wildlife park.

Lined up between the Singapore Zoo and the Night Safari, the 12 hectare River Safari showcases marine life from eight iconic river habitats around the world.

Roughly organised in the shape of a “V”, the entrance of River Safari is at the pointed end. Visitors can make their way down the left side of the “V” where seven river zones are located. The Giant Pandas can be found at the end of this first leg. Visitors then cross a bridge to the right bank, which is dedicated to the Amazon River, before heading back to along the right side of the “V”,  back to where they started from. The River is Calling

Taking a left from the main entrance of River Safari, the river journey begins through a darkened air-conditioned room with multimedia presentations that introduce the Park.

The young ones will be anxious to get past the video slideshows to view the real animals just around the corner. To do so, simply follow the fish prints on the floor and step back into the sunlight.

The first river system that visitors encounter hails from the United States – the Mississippi River. Here, you can see the American beaver, which shares its habitat with some content-looking ducks, the snapping turtle, the alligator gar (a type of fish) and the endangered paddlefish. The snapping turtle and the alligator gar make interesting viewing, but the oddest looking of them all has to be the paddlefish. It almost looks like someone had stuck an elongated duck’s bill onto its mouth by accident. 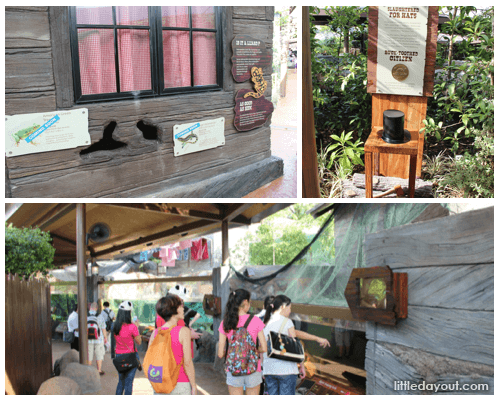 Two African rivers – the Congo and the Nile – are showcased in the next section. Keep an eye out for the dwarf crocodile at the Congo zone. These crocs rarely exceed 1.6 metres in length. From above the waterline, you may have to look quite closely in order to see their two bulging eyes squinting out of the water. Surprisingly, even though the River Nile is the world’s longest river, there is not that much marine life on display at the tank dedicated to it. Look out for the African tigerfish, named for their striped exterior, swimming around.

The next zone takes visitors to the banks of India’s sacred river. The Indian gharial is the highlight of the Ganges River exhibit. Unlike the crocodile exhibit at the Singapore Zoo, the Indian gharial’s enclosure consists of full floor-to-ceiling glass. This allows visitors to stand side-by-side with these humongous reptiles and their distinctive snouts. Just beside the Ganges River exhibit lies the Murray River zone which will soon house freshwater fish such as the Murray cod, barramundi and lungfish.

The Mekong is the world’s 12th longest river and stretches through Thailand, Vietnam, Cambodia and China. It is also home to the Mekong Giant Catfish, one of the world’s largest freshwater fish. Go past the enclosure housing crab-eating long-tailed macaques and you will come face-to-face with these monstrous river dwellers. 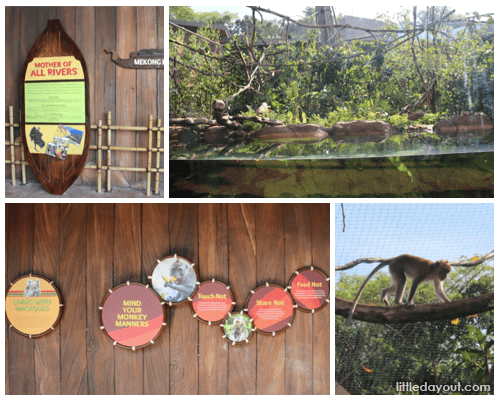 The three-metre-tall viewing gallery provides visitors with an underwater perspective of these Mekong Giant Catfish. These freshwater fish can grow up to 3.2 metres in length and 300 kg in weight. Thoughtfully located seating provides a spot to take in the view of these river monsters swimming back and forth. 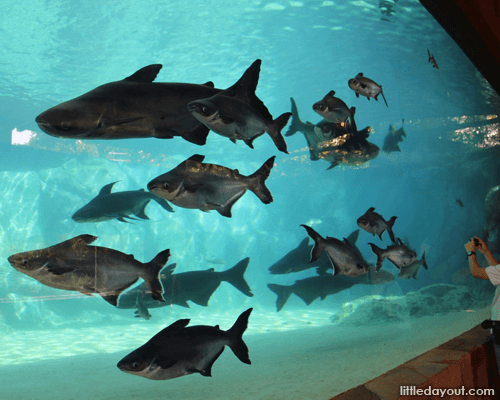 The Mekong River gently segues into the Yangtze River zone. Animals such as the Chinese giant salamander and the Chinese sturgeon can be found here. However, most people will be focused on making their way to the Giant Panda Forest enclosure, a highlight of any visit to River Safari. Within the Giant Panda Forest, Kai Kai and Jia Jia, the male and female Giant Pandas respectively, make their home amid a habitat designed to simulate their native surroundings back in China’s Sichuan province.

The first animals visitors encounter when they step into the Giant Panda Forest are not the giant pandas. Instead, they are the golden pheasant and a pair of red pandas, Poonya and Puskar. These beautiful animals are a delight to watch and make a wonderful prelude to seeing the giant pandas. Kai Kai is the first panda you will encounter. The viewing corridor passes right over Kai Kai’s enclosure and you would be able to catch him enjoying bamboo, oblivious and sometimes enjoying the attention of gawking onlookers. 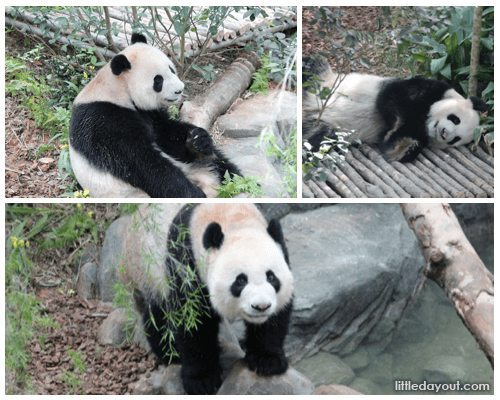 Going past a series of educational displays about pandas, visitors get to meet Jia Jia. She can often be seen pacing up and down the slopes of her hilly habitat. If she is feeling shy for the day and decides to retreat to her cave, River Safari has installed a display screen near the exit that allows you to watch her at rest. 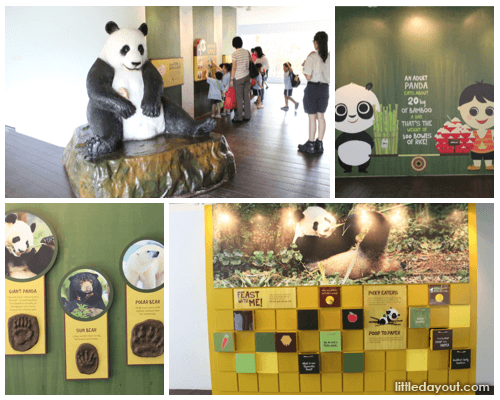 Do take heed of the need to lower speaking volumes while in the Giant Panda Forest and that no flash photography is allowed. A gift shop and an eatery, Mama Panda Kitchen, can be found at the end of the Giant Panda Forest, helping to round off any pandas-tic encounter with these black-and-white giants. Crossing a bridge to the other bank of the River Safari, visitors are taken to the wild Amazon. This area is dedicated to the world’s longest river, but its main attraction – the Amazon River Quest – is still not open as of April 2013.

When it finally does opens to the public, the Amazon River Quest will take visitors on a boat ride to view over 30 animals including the Brazilian tapir, capybara and giant anteater. The opening date for this exhibit is expected later in 2013.

Meanwhile, visitors can still view two other exhibits related to the Amazon – the Squirrel Monkey Forest and the Amazon Flooded Forest.

Squirrel Monkey Forest is a walk-in enclosure filled with these small playful monkeys. You will feel as if you have stepped into a monkey’s picnic as these agile primates bounce around you, often with food in hand. Last stop at the River Safari is the Amazon Flooded Forest exhibit. Here, visitors get immersed in the mysterious underwater world created whenever the Amazon River floods its banks and submerges the surrounding forest.

Entering through an underwater tunnel, visitors can view two giant river otters, Takutu and Chelsea, happily swimming around. Don’t be disappointed if you don’t see them in the water as they may well be on land. An overground viewing gallery up ahead allows visitors to get a good view of their on-ground antics as well.

Passing aquarium tanks containing electric eels and piranhas, the centrepiece of the Amazon Flooded Forest is an aquatic display that simulates a submerged Amazonian forest. Here, magnificent manatees – 10 of them – swim around gracefully. You may even be able to spot them doing twirls and spins in the water. There are 2 babies in this herd of sea cows. See if you can spot them! If you feel as if you are underwater, look above. A glass ceiling shows off a tank housing rays above. The light coming in filters through the water, creating a shadow play of dancing waves.

Young ones will have fun playing hide-and-seek in a hollowed tree trunk tunnel at the back of the viewing gallery. While inside the tunnel, they will also find something special if they look upwards too.

A nice feature of the Amazon Flooded Forest is an ascending path that encircles the display. There are multiple viewing ports along the path. These provide amazing vistas of the tank’s marine life from different levels. Swirling blue lights and enchanting music in the corridor makes it feel almost like swimming upstream as you walk up the slope. At the top of the ascent, it feels as if you have broken through the water’s surface to fresh air.

To get the most out of a visit to River Safari, catch the River Talk show. This is held twice daily at 11.00 am and 4.00 pm at Amazon Square, just outside the entrance to the Amazon River Quest. Enjoy close encounters with birds and animals that make their home along the banks of rivers. Meet Prickles the hedgehog and a crab-eating racoon. It even features birds that swoop through the crowd and there are plenty of opportunities for visitors to touch the animals at the River Talk show. Is It Worth Visiting River Safari During the Soft Launch Phase?

Newly opened on 3 April 2013, River Safari is currently in the “soft launch” phase. This means that some of the exhibits are still not fully ready. While we did see many signages stating “coming soon”, it still provides a nice day out for families and children.

When it fully opens, River Safari should be even more exciting and fun. Little Day Out looks forward to the full opening and we will be back again!

Why this Place is Great for a Little Day Out