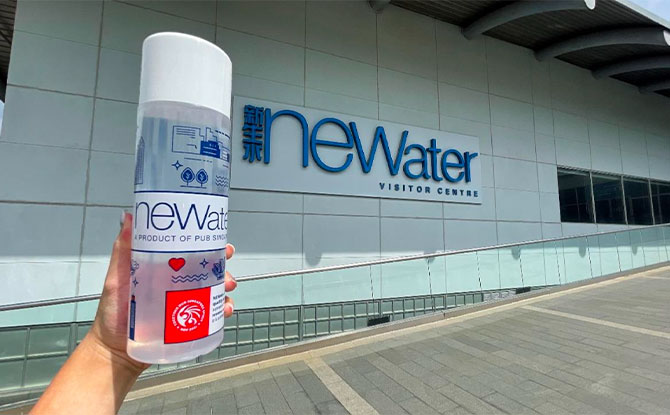 Singapore PUB has specially produced a new reusable NEWATER Bottle To commemorate Singapore’s 56th birthday. This bottle holds 600ml of liquid, is made from polypropylene plastic (PP) and is BPA- free. With this redesign of NEWater bottles, PUB hopes to bring about greater awareness about water sustainability and conservation.

Many would be more familiar with the old design of NEWater bottles which were 350ml polyethylene terephthalate (PET) NEWater bottles. Since February 2020, PUB has stopped the distribution of those bottles to reduce single-use plastic.

The new bottle comes with a specially designed shrink-wrap label that features Singapore landmarks such as the Esplanade and Marina Bay Sands.

There are also water icons that collectively represent the rigorous treatment process in the production of NEWater.

As the name suggests, the bottle contains ultra-clean, high-grade recycled water also known as NEWater. NEWater is perfectly safe and wholesome for drinking.

The bottles are included in this year’s NDP Pack, distributed to Primary 5 level students and NDP partners.

Reusable NEWater bottles are now available for collection! The public can visit the NEWater Visitor Centre or Sustainable Singapore Gallery for a fun tour to learn more about NEWater and collect a reusable bottle for free while stocks last.

Sign up for a tour at the link here.