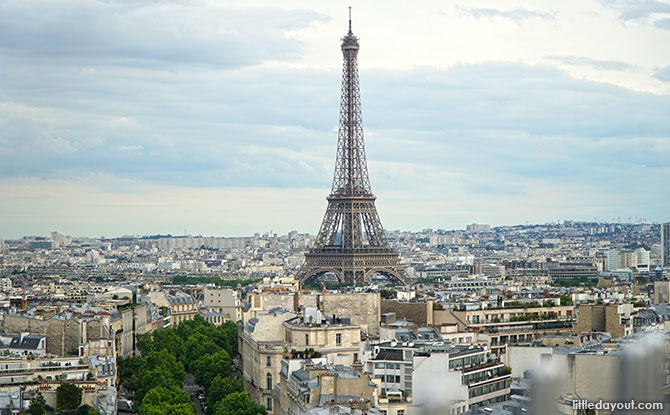 Our Paris family trip started from a crowded waiting room at St Pancras International train station in London. We were waiting for the EuroStar to Gare du Nord train station, Paris.

After a half-hour delay and two-hour journey, which ran under the English Channel, we arrived in Paris.

Day 1: From the Louvre to the Arc de Triomphe 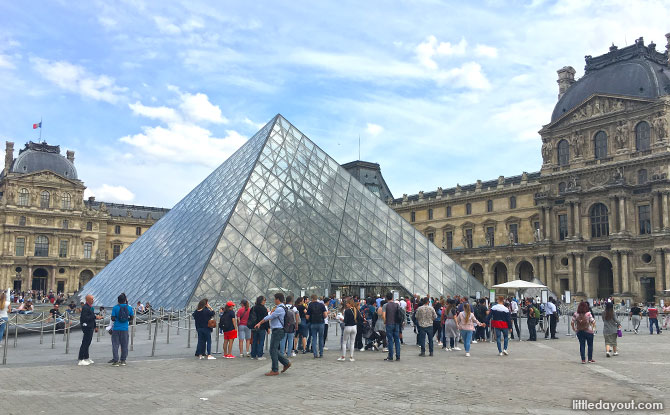 Our first destination was the Louvre.

As it was a Friday, the Louvre was open till late, allowing us to maximise our time at the museum (and hopefully minimise the crowds too). We highly recommend buying a ticket to the Louvre beforehand. Purchased from the museum’s website, it comes with a designated entry time that allows you to fast track admission via the Pyramid. 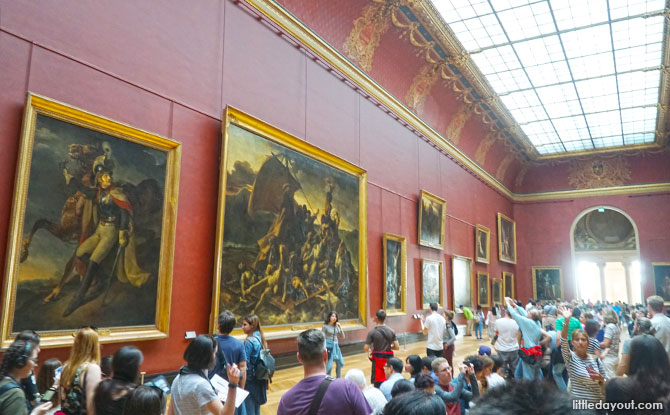 The Louvre is filled with countless treasures. The building is made up of three massive wings and it is easy to get fatigued trekking through room after room of masterpieces. Rather than try to see it all, we picked up a map and let the kids navigate through the maze of corridors to the star exhibits. 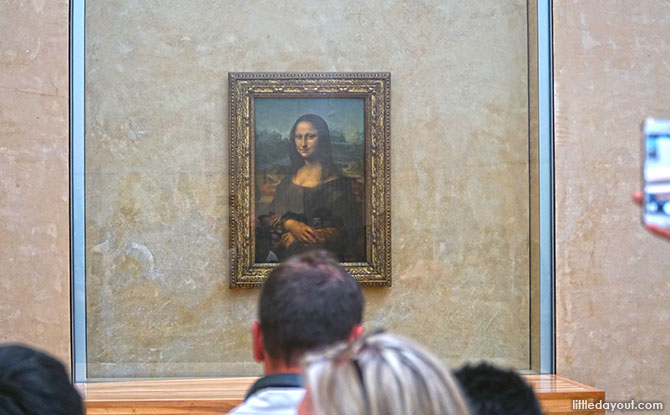 The Mona Lisa was swamped by a sea of admirers but there were plenty of other masterpieces around the museum to enjoy. 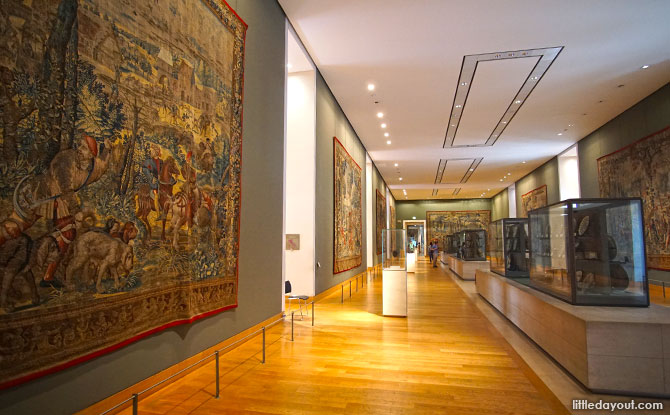 We even enjoyed soaking in the tranquillity of the room of tapestries in the Richelieu wing and admiring the minute details found on the canvases.

From the Louvre, it is straight down the Champs Elysees to the Arc de Triomphe. 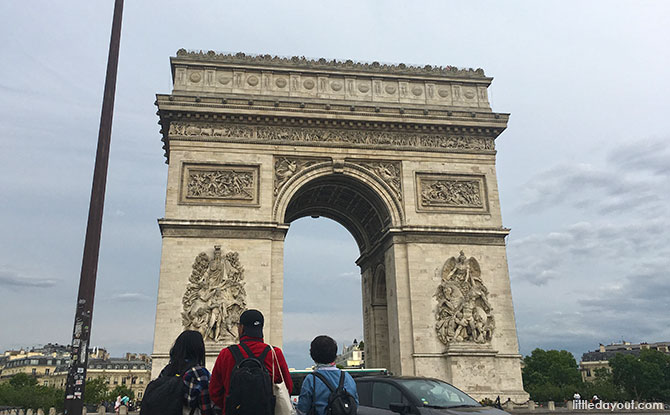 Rather than walk, we took the metro there. And it was a good thing that we did as it allowed to conserve our energy for the 280-plus stairs to the top of the monument! 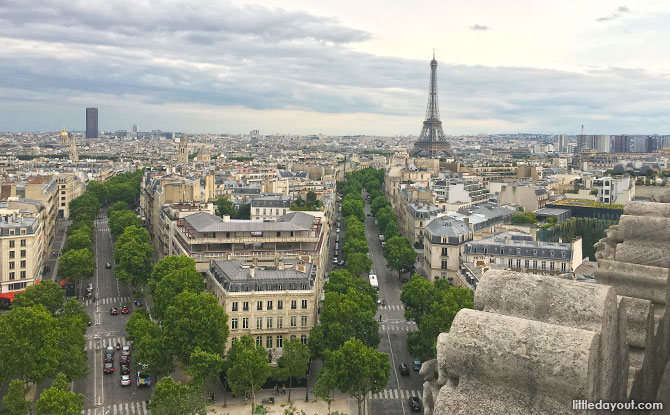 From the roof terrace of the Arc de Triomphe, we got to magnificent 360-degree view of the city. Everything from the Eiffel Tower to Montmartre to the major business district of La Defense lay within view.

Dinner was at a tourist-friendly bistro along the Champs Elysees, Le George V. 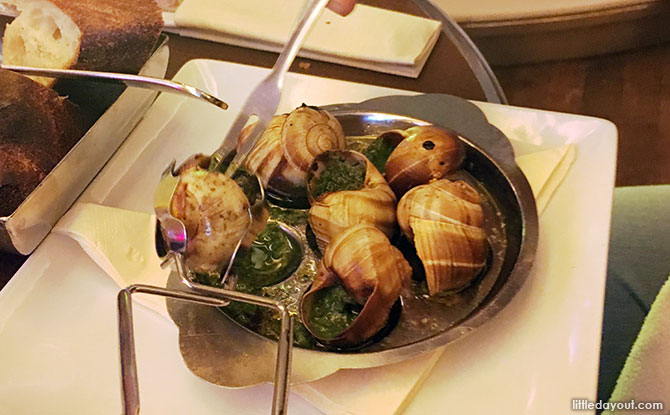 We dived straight into the clichés of French food – escargot, onion soup, duck confit and steak tartare filled the table. It was a gastronomic introduction to France and a fitting end to the first day of our Paris family trip.

Montmartre is Paris’ hill and we set off the next day to explore it. Once a bohemian hangout, it now attracts scores of “mainstream” visitors. Thankfully, we got a glimpse of the quieter side of Montmartre as we made our way up to Sacre Coeur, the white basilica at the top of the hill. We took a less well-trodden path from the Chateau Rouge metro station through a residential neighbourhood to the basilica. 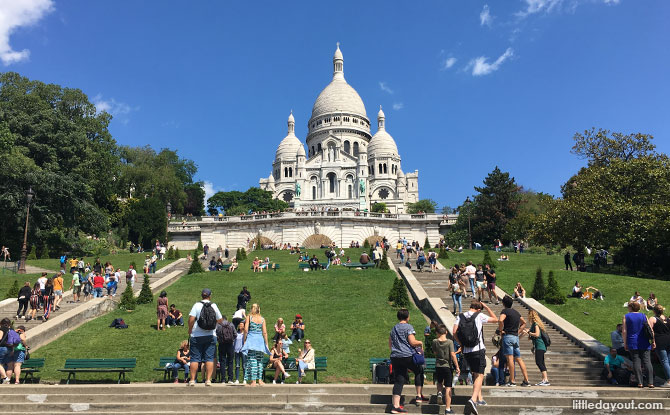 At Sacre Coeur, there is no escaping the crowds but the sweeping vistas of the city of Paris below made the visit worth it. 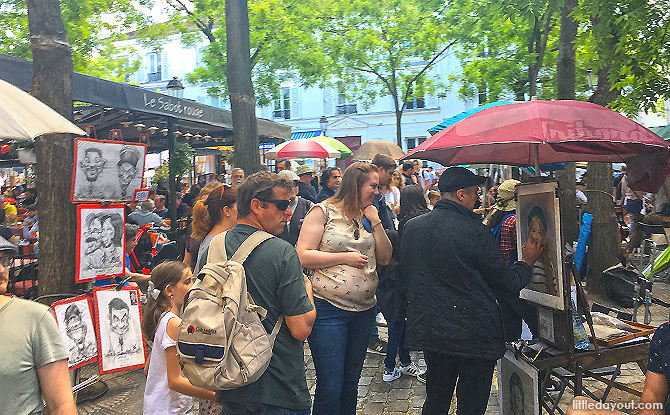 The streets of Montmartre still buzz with artists at work at Place du Tertre, close to Sacre Coure. From the heights of Montmartre, we made our way down to the banks of the Seine river. Around the Île de la Cité, we joined others in viewing the attraction no one could enter, Notre Dame de Paris.

We could only imagine the horror that the people of Paris must have felt on that fateful day when the roof caught fire, causing it to collapse in. 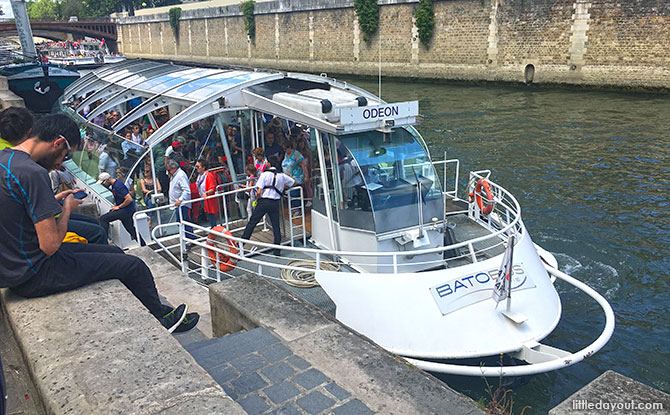 The left bank of the Seine beside the Notre Dame is a popular departure point for river cruises. We bought tickets along the embankment for the BatoBus service. This is a ferry service that loops around stops on the River Seine. It provided us a chance to take in some sightseeing while sitting down. 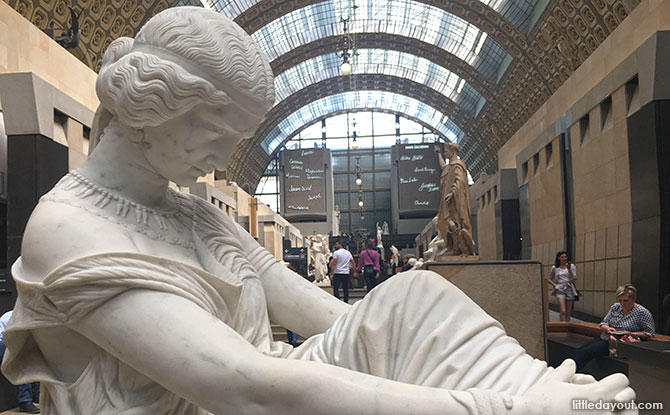 We got off the BatoBus to visit the Musee d’Orsay. Focusing on works from the 19th century, the highlights of the visit to the museum, housed within an old railway station, were the paintings by the Impressionist masters and artworks by Van Gogh. 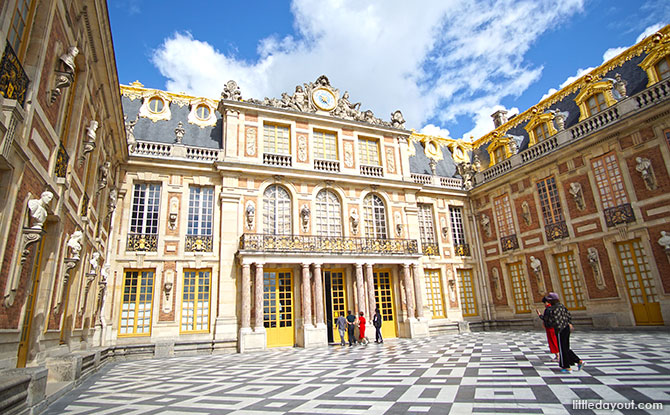 Best known as the palace of the Sun King Louis XIV, Versailles is about a 50-minute train ride away from Paris.

By the time we arrived at 10 am, the ticket queue snaked around several times up and down the courtyard. We were grateful to have purchased tickets beforehand from the Versailles website and, with a preset entry time, we were able to skip the queue and walked straight into the palace from a separate entrance. 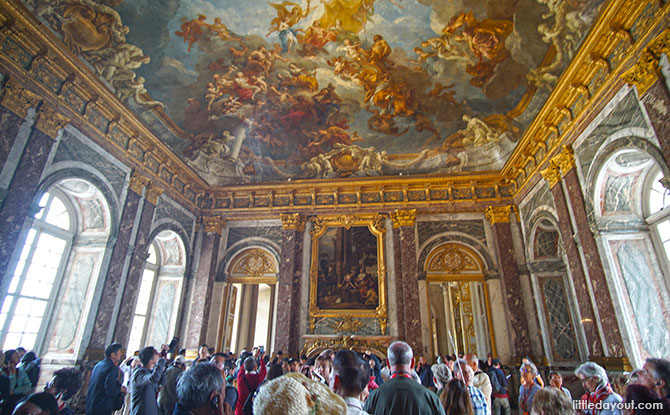 Versailles is known for its opulence and, in this respect, it lives up to this reputation. Stepping through the king’s and queen’s apartments, we were overwhelmed by the luxuriously decorated rooms, magnificent paintings and objets d’art. 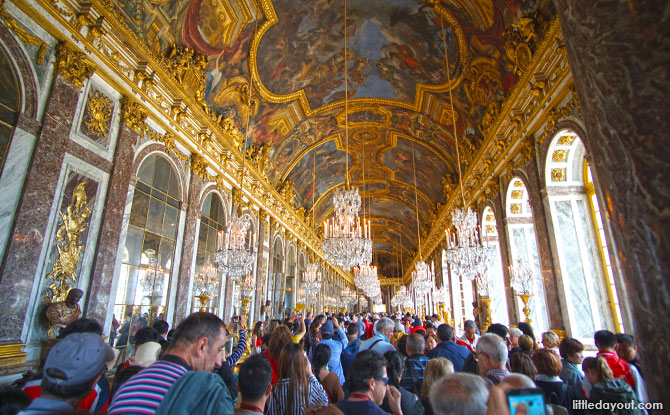 A highlight of the tour through Versailles is the Hall of Mirrors which bedazzles with a display of candelabra, mirrors and light. 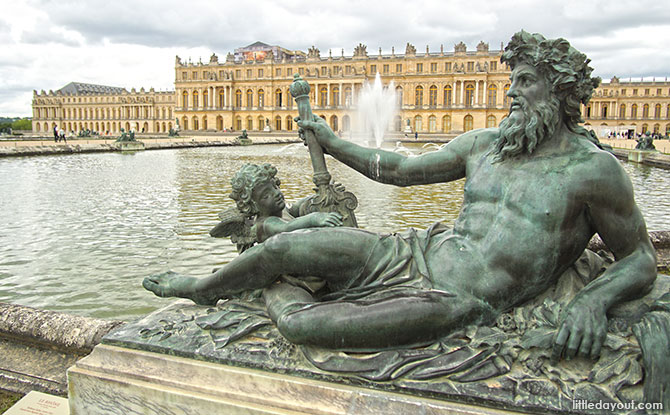 However, with the endless crowds, the Palace building made us feel rather stifled. Therefore, we were happy to escape from the crowded interior to the wide, open expanse of Versailles’ gardens. The Garden has several eateries and we chose one, Brasserie De La Girandole, for lunch. Beyond the ticketed area of the Versailles’ gardens is the Grand Canal. It is a popular area for families to spend a day in the park or enjoy boating on the water. 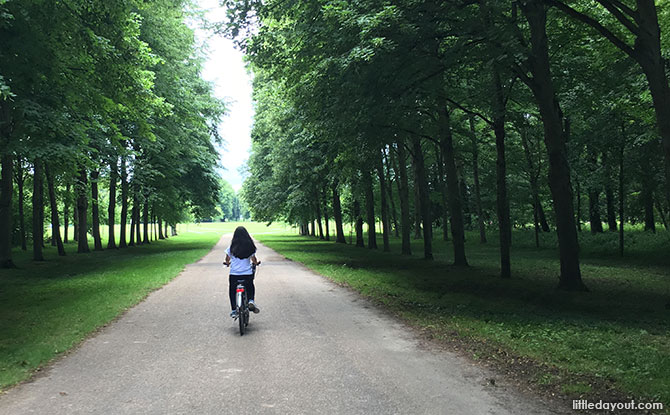 We chose to rent bicycles and explore the lush greenery of the park on two wheels. It was a welcomed activity after the last two days of museum-hopping through Paris during our family trip.

After the visit to Versailles with the family, we made our way down to Galleries Lafayette in the heart of town, close to the Paris Opera House. 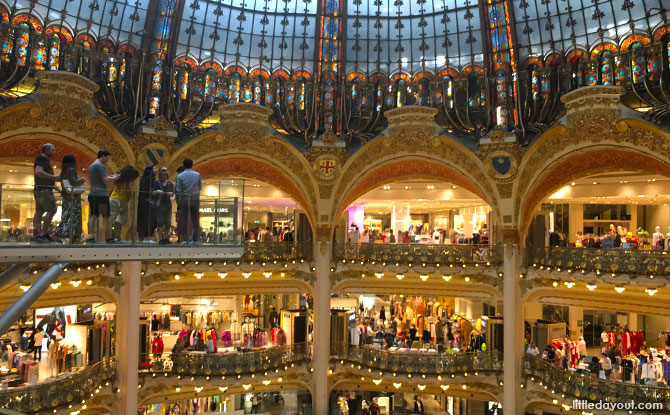 Galleries Lafayette not only has shopping but a beautiful glass atrium. We settled down on the sixth floor where we not only got a drink but a view of the Eiffel Tower.

Day 4: Relaxing at the Luxembourg Gardens Our last day in Paris on our family trip was a relaxed affair. We paid a visit to the Luxembourg Gardens in the Latin Quarter. With music playing in the park and the beautiful surrounds, it is no wonder that it is a popular spot in the city. 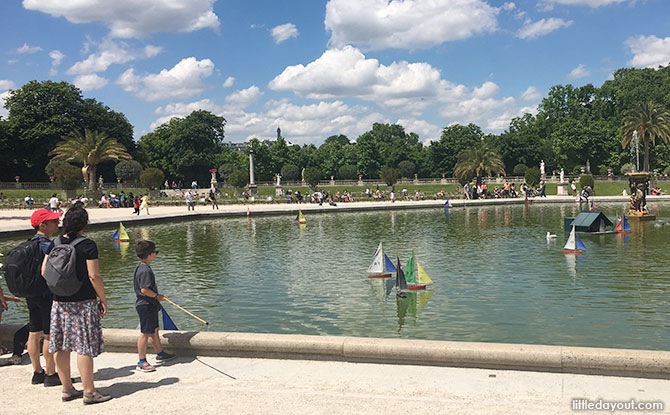 An activity for children at the Luxembourg Gardens is sailing wooden boats at the central pond in front of the Luxembourg Palace. These can be rented and nudged around the pond as the wind fills their sails. 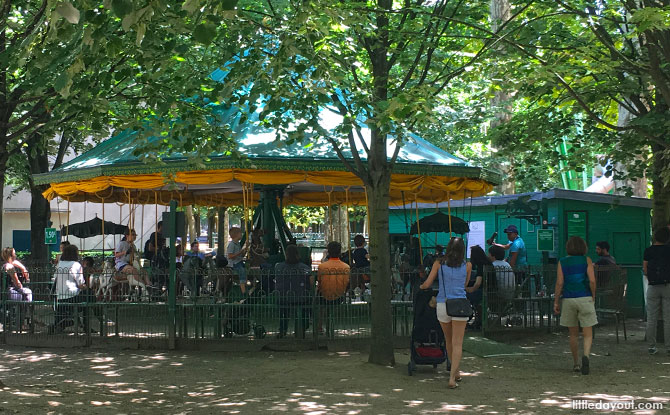 There is also a children’s playground and carousel in the park.

Before long, it was time for the final meal of our Paris family trip, after which, we made our way back to Gare du Nord and the EuroStar; back to London to continue our family holiday in the United Kingdom.

Japanese Supermarkets In Singapore: Where To Get Authentic Japanese Products