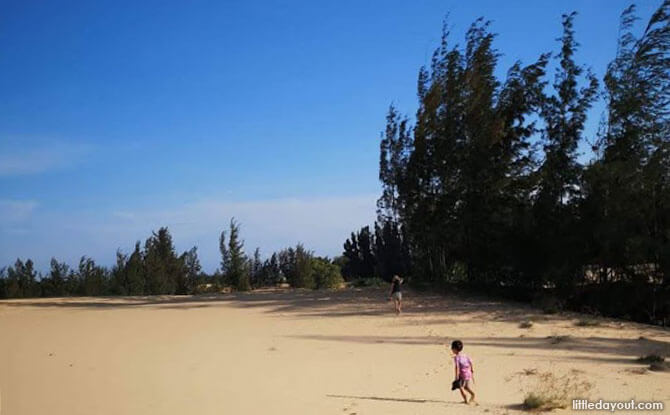 Deserts in Southeast Asia? More specifically, deserts near Ho Chi Minh City? Few would have thought there were sand dunes near us. Mystical as these geological wonders are, we were so drawn we decided to visit Mui Ne with kids to find out more. We felt a little like Lawrence of Arabia gallivanting into the unknown looking for treasures – and since we love adventures off the beaten track, Mui Ne was just the place to find one. 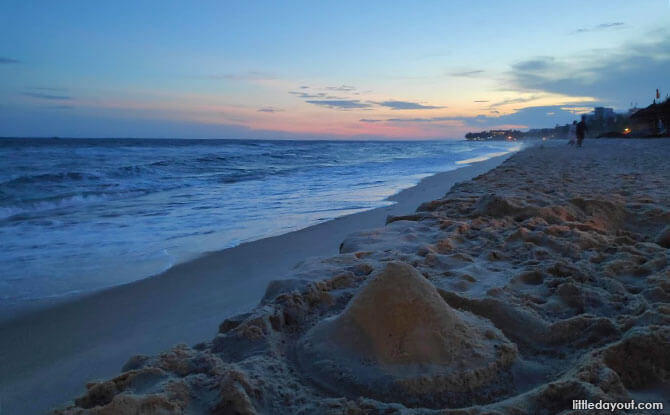 Mui Ne is one of the beach towns accessible from Ho Chi Minh City. Being beach lovers, we usually look for beach getaways near a city so we could enjoy the best of the city and sea. The four-hour car journey (we engaged Saigon Transfers) was the quickest and easiest, compared to coach or train.

With young children in tow, we wanted to minimise travel time and get to our three-night stay at Mui Ne.

Be prepared for the car journey to be at a slower pace as the traffic police are highly vigilant and speed traps abound. Because of many heavy vehicles plying the route, we could only travel at an average of 60 kmph. If your children love audiobooks, bring a few along for the road trip and that would keep them occupied for some time. Otherwise, we enjoyed cloud gazing amidst the deep blue skies, playing “I Spy” games, pointing out padi fields, dragon fruit plantations and rubber trees.

Mui Ne is a fishing port, near the Phan Thiet region which is known for manufacturing fish sauce. You can smell it once you enter the area, with huge fermenting jars lining various premises.

Legend has it that the youngest daughter of the Cham king was known as “Ne” so when they build the temple in the cape, they decided to name the area as such. These days, tourists flock to Mui Ne to see the untouched beauty of the fishing town as well as marvel at the geological wonders.

Jeep Tour of the Natural Wonders 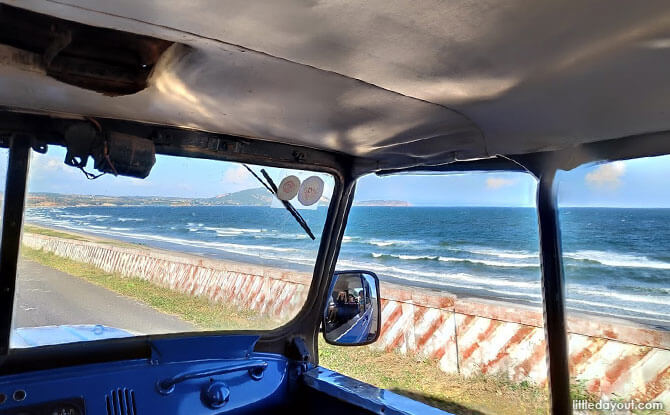 What better way to see South Vietnam’s natural wonders than to go on a jeep tour! A SGD40 tour booked at any agency or hotel in Mui Ne brings you to the – Fairy Streams, the Fishing Harbour, White Sand Dunes and Red Sand Dunes.

The tour lasts about four hours. We chose to go on the 2 pm tour to catch the sunset (at about 5.30 pm). There are two other timings per day. Bring along some water, snacks, hats, repellent, sunnies, scarves and you are ready for the ocean drive! 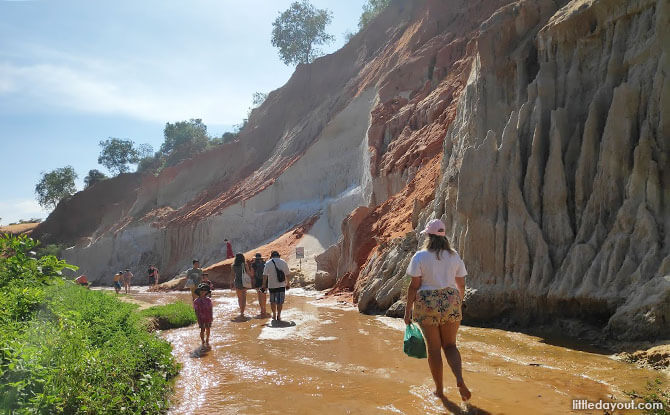 Fairy Streams is a not-so-grand Canyon of Vietnam where tourists get to walk in the shallow streams surrounded by limestone rocks, sand dunes and soft clay. The children will love the cooling stream and the chance to “splash” about without getting wet while walking through eroding cliffs and red canyons. 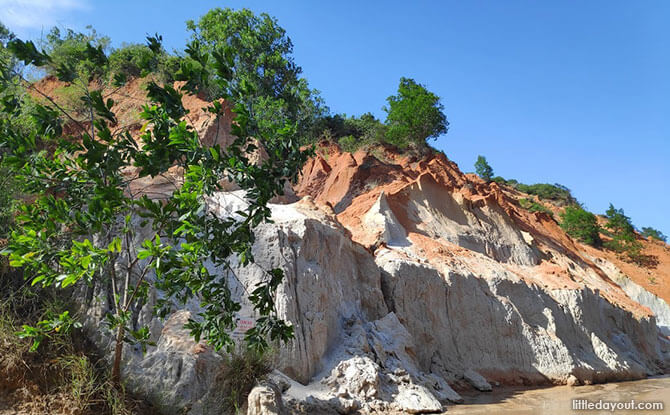 It is a relaxing stroll through the meandering streams and plenty of photo opportunities to emulate scenes from “Journey to the East”. If it’s too hot, cool off with an ice cream roll from one of the street vendors who mix, freeze and roll the ice cream on the spot. 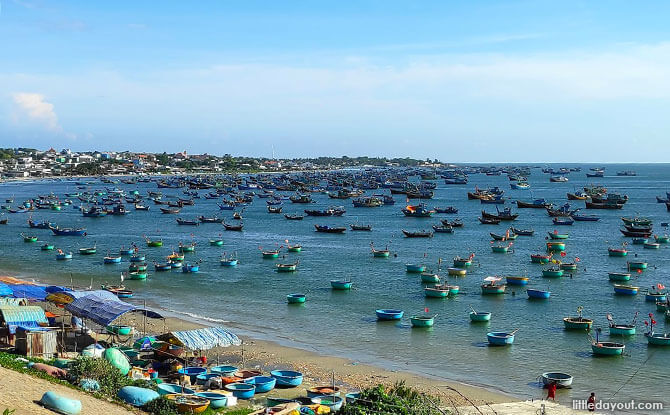 Fishing is the mainstay of many of the locals. In the early afternoon, visiting the fishing harbour was a sight to behold as the fishing boats have returned and “docked” for the day. Vietnam’s signature “basket boats” lined the harbor Vietnamese fishing boats or coracles are different from their counterparts in other countries given its shape and material. 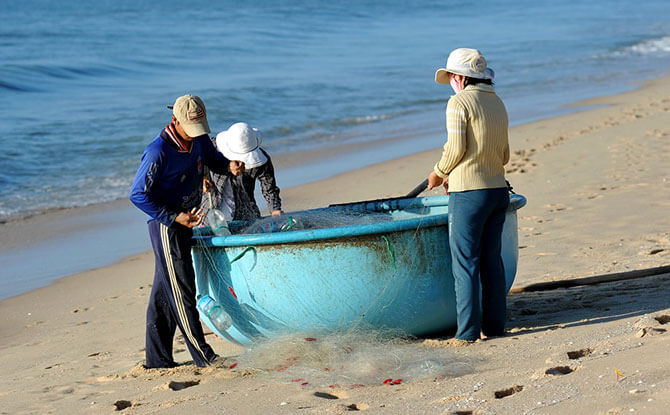 These boats were invented to avoid the taxes the French levied on fishermen, hence they became popular because of the tax-free status and clever design.

For seafood lovers, you can even order a fresh catch in the mornings from a fisherman’s wife and eat it on the spot. Otherwise, head to the bo ke (seafood) places at the Ham Tien area for a good meal. We highly recommend “Quan Bi Bo” for its honest, family-run restaurant which sells excellent tamarind crabs and fresh fish. 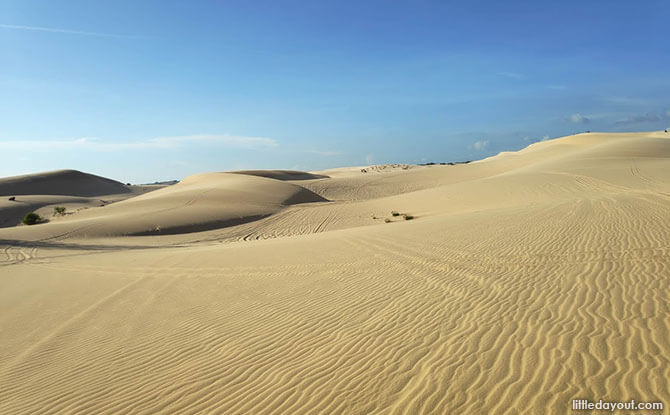 My favourite part of the drive was definitely the ocean road drive towards the White Sand Dunes, a good 40 minutes away from the Mui Ne town. The vastness of the South China Sea, the sight of crashing waves and sprawling fields of greenery was a balm for the weary.

At this point, the winds had lulled my children into a quick nap, leaving the adults to admire the scenery.

As we reached the White Sand Dunes, we were greeted by the dramatic sandscape of nothing but sand. We chose to walk in the dunes away from the crowds as the ATVs were rather overpriced for a mere 20-minute ride.

Visiting the dunes in the late afternoon meant it was not too hot and the sand was comfortable to walk on. Strong winds might sweep the sand onto your bare skin or eyes, so wearing shades, hats and scarves would lessen the discomfort.

Nonetheless, it was a sight to behold! A little about sand dunes – they are common on shorelines where sand is blown into the land. Over time, the dunes become more significant in size and depth just like the ones in Mui Ne.

Next to White Sand Dunes is the White Lake – a mesmerising body of water with many lotus plants and a perfect spot to catch the sunset. But we have got one more stop to go! 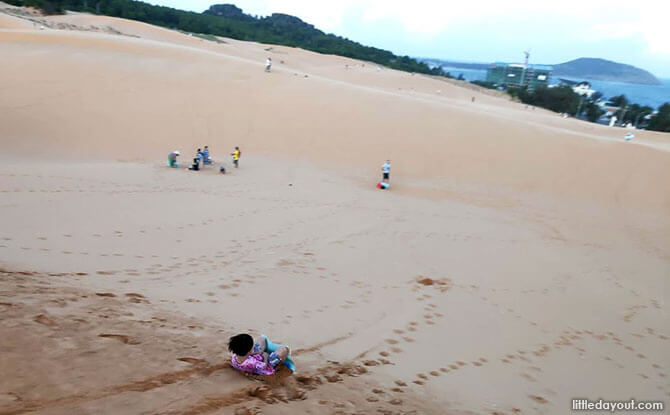 The Red Sand Dunes are the smaller, redder sibling of the White Sand Dunes. No noisy ATVs here but plenty of local vendors loaning out plastic sleds for fun sledding down the slopes.

We had a very unpleasant encounter with the young male vendors pickpocketing a mobile phone, hence be very wary of your belongings and keep your pockets empty while sledding down the slopes lest anything falls out or, worse still, wallets and phones fall prey to unnecessarily helpful hands. As with the usual travel must-dos, keep your belongings close to you in a theft-proof bag at all times.

Despite the incident, it was exhilarating sledding down those slopes. The wind was sweeping sand onto our legs and it was a strange, prickly sensation which also left us wholly sandy at the end of the day. Nothing a good bath wouldn’t fix!

With the setting giant yolk casting orange hues onto the dunes, it was time to say goodbye after an afternoon’s adventure.

Apart from the instagrammable scenery, Mui Ne has idyllic beaches away from the hustle of Ho Chi Minh City. 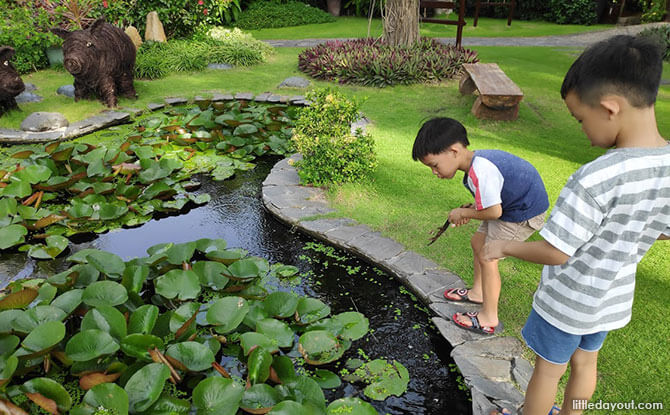 We enjoyed our resort’s (Bamboo Village Resort) lush tropical foliage, little ponds and plenty of outdoor spaces for our children to explore. There was even a playground NOT made from plastic. It was reminiscent of playgrounds of the past, made of colourful tires and wood in a sandpit.

The remainder of our holiday consisted of chasing waves, watching kitesurfers, feeding fish, sandplay, swimming, wildlife-watching and just enjoying each other’s company. Our “detour” to Mui Ne was definitely well worth the journey down south!