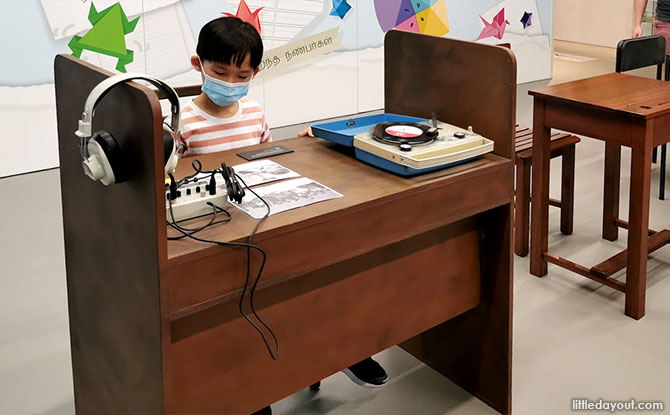 In conjunction with its re-opening, there are guided tours including dramatised tours and Pixel Art workshops run by teachers during the September School Holidays. We highly recommend a guided tour, particularly the dramatised one that brings our education history and story to life!

Here’s a lowdown of what visitors to MOE Heritage Centre can expect. 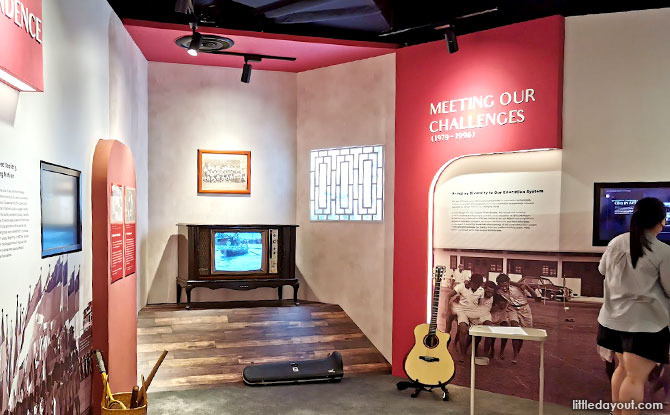 MOE Heritage Centre used to be situated at Commonwealth and it completed its move to Novena in 2021. The museum was set up to inspire those who want to be teachers, affirm the work of educators and commemorate contribution of educators and communities that have shaped education since the founding of Singapore.

It consists of six galleries, each dedicated to certain periods of our education story. There are also two theatrettes where visitors can view short films about our education journey. 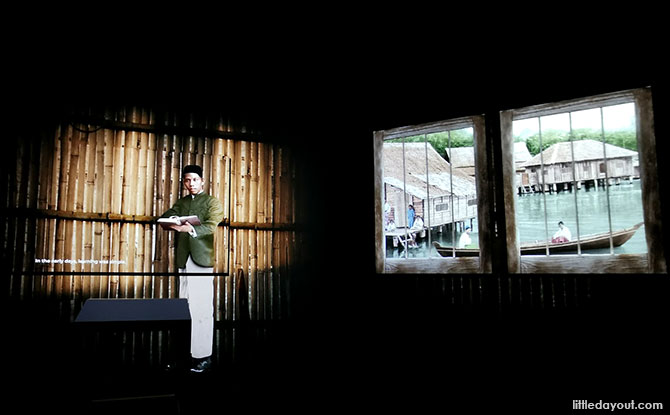 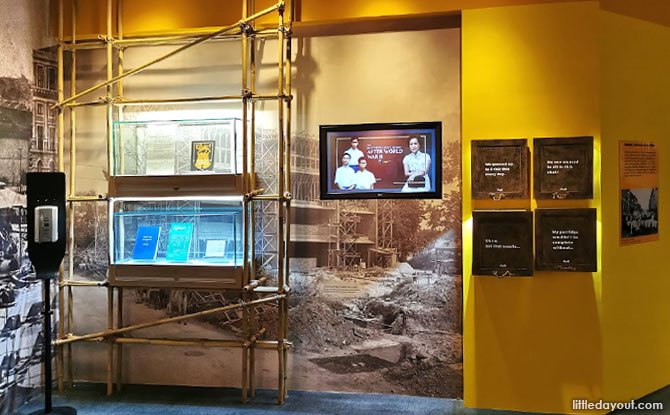 However, when war came, the education landscape was transformed according to the Japanese occupiers. The Japanese language was taught, students had to face the direction of Imperial palace while singing the Japanese national anthem. Students also had to grow local vegetables such as tapioca and other local vegetables.

Post-war efforts to rebuild the economy and schools were tough. The 1947 Ten Year programme was introduced to provide equal opportunities for all children with a centralised education system. In 1950, the Teachers’ Training College was started to equip educators with skills to teach future generations.

There are many anecdotes, fun facts and artefacts to check out at the gallery. One can see the toothbrush and cup to up dental hygiene amongst students as well as fresh milk for malnourished ones. 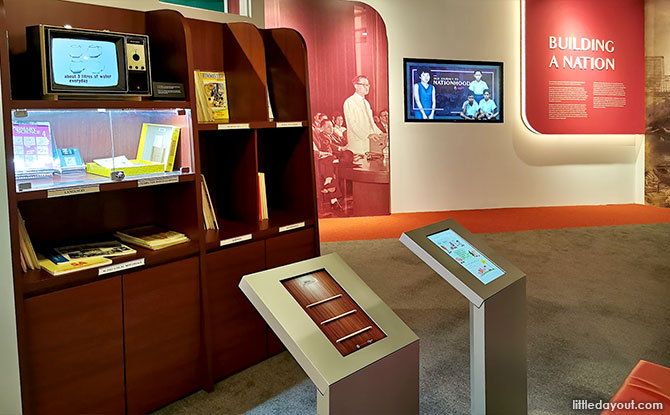 This gallery would be one full of memories – we could see our old textbooks on display and loaded on the personal learning device. This was certainly telling of our age.

As Singapore became independent in 1965, education was a key lever to train the unskilled workforce, increase the number of schools to meet demand and establish national unity. The ritual of singing Majulah Singapura during flag-raising assembly begun to foster a sense of national unity. We also learnt folk songs like Chan Mali Chan, Di Tanjong Katong, Munnaeru Vaalibaa.

There was also technical education implemented to meet the needs of a labour-intensive economy and Extra Curricular Activities were started to develop well-rounded students! In the 1980s, the sciences, technology, research and development became more relevant and hence the education system was reviewed again. 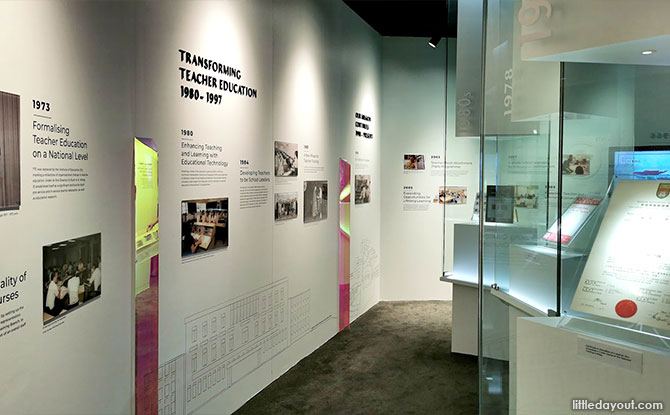 One can also see the most current updates of our education system including the 21st Century Competencies framework along with the Nurturing Early Learners framework. Students’ projects were also displayed to showcase the different ways of learning and applying knowledge.

The teachers’ education and development is also highlighted in the gallery on how they are continually learning – whether it’s at NIE or AST. In the past, there was a lack of teachers who were capable to teaching in English for instance. Now, a different level of competency is required not just in languages but in technology as well as to lead, care and inspire. 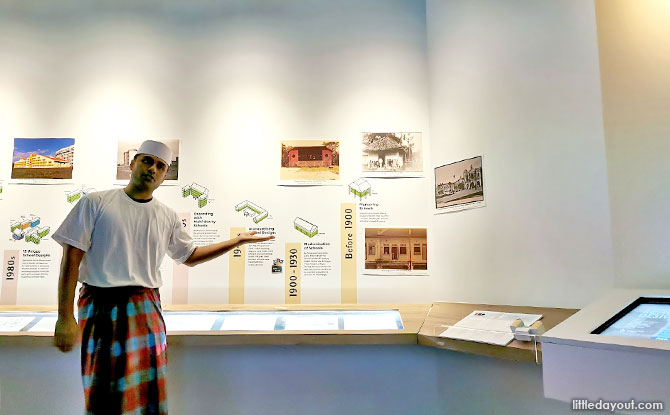 The very first schools were housed in attap huts, shophouses, places of worship. It was not until 1950s there were more standard designs of schools. One can see the evolution of the buildings. Now we have a huge variety of school buildings and our kids are lucky to see inclusions of spaces like indoor sports halls in their schools!

Don’t forget to take your pictures at the gallery School Day Memories. Spot the OHP, which is now replaced with the visualiser. Find the desk you used to sit on! & see the old blackboard that was a common sight in the 80s. This is a fun gallery to reminisce about our old school days. 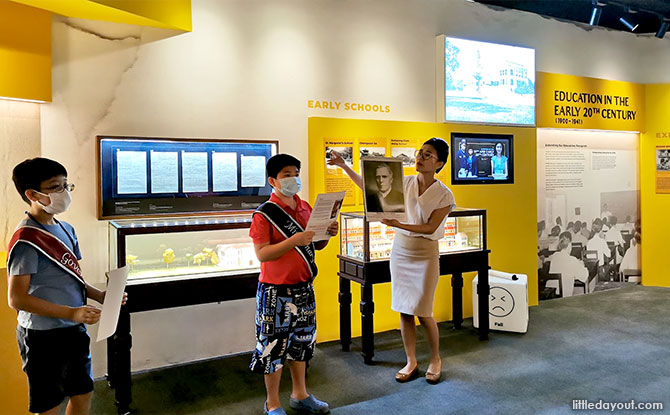 We signed up for a dramatised tour at MOE Heritage Centre that took place during the September 2022 holidays and enjoyed it very much as a family. We highly recommend the tour fronted by actors in various roles who even included visitors. We had visitors with scripts and were tasked to speak like a missionary or a governor. Apart from acting and making the exhibition come alive, the actors also got us to sing along and reiterate the most important principle about education. 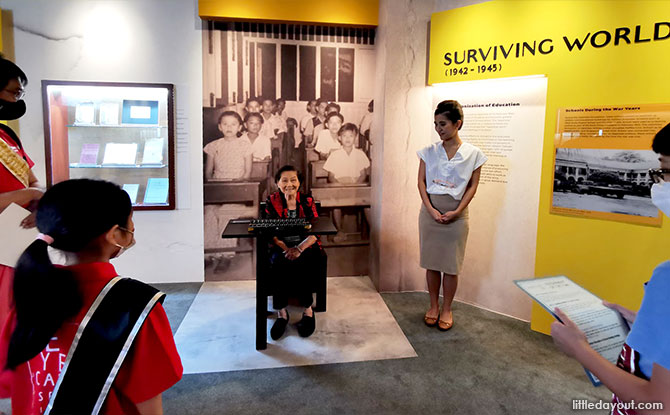 Look out for the grandma who used to be one of the students in the school and had to learn English from scratch! It was amazing to watch her talk about her school days which sounded vastly different from our own experiences and even our children’s. 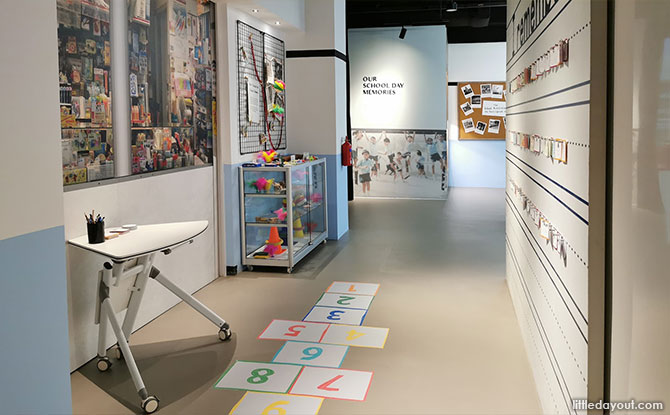 In all, it was such a pleasant and immersive experience visiting MOE Heritage Centre. We could share our memories of school days, listen to the school anthems of various schools, learn more about the history of schools in Singapore and be enriched about the immense task of educating generations.

If you enjoy a dose of history, check out this heritage gallery at one of Singapore’s most historic hills.