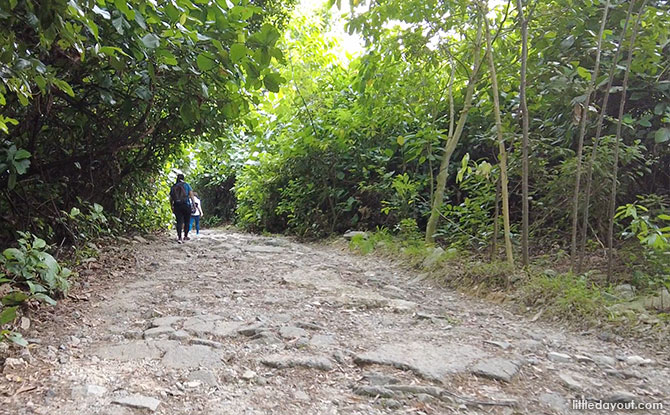 Here are some useful things to note for those who are intending to walk along the Mandai T15 trail.

Things To Know About the Mandai T15 Trail 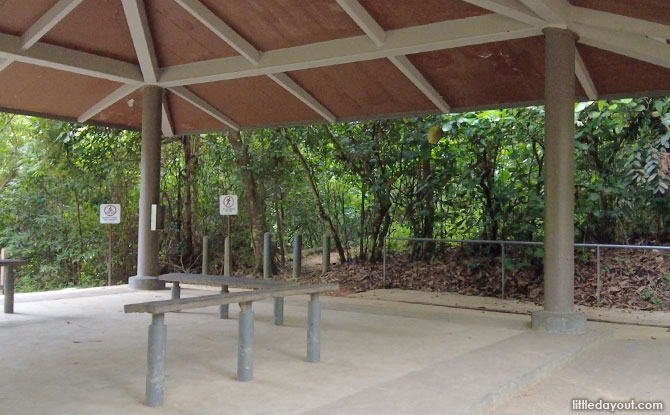 The first is from the “training shed” close to Zhenghua Nature Park. You will find the start of the trail in one corner marked out as the Gangsa Trail. 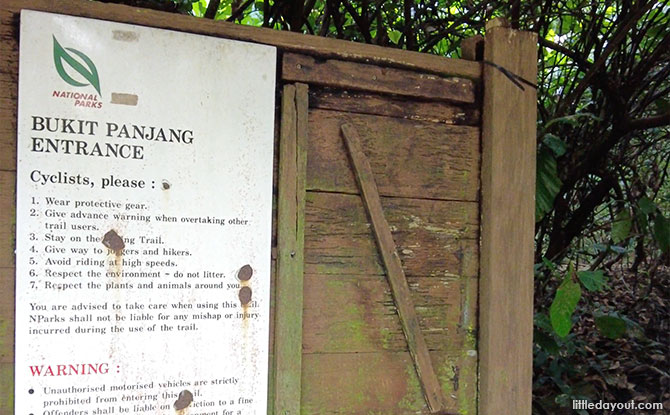 The second start point is near the Observation Tower. A signboard marked “Bukit Panjang Entrance” stands next to the start of the trail. This path eventually converges with the one from the “training shed”. 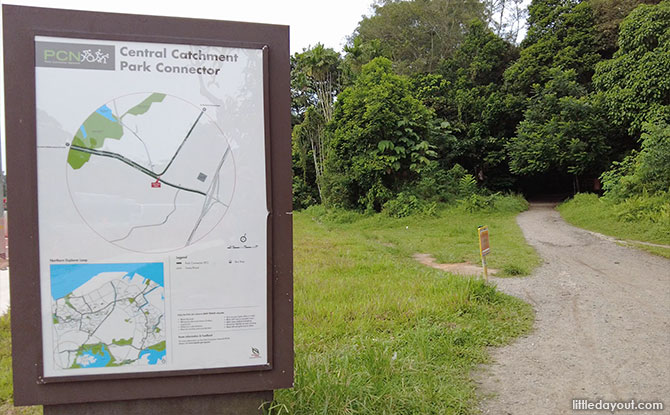 The northern entrance for the Mandai T15 trail is located at the junction of Mandai Road and Mandai Lake Road, the road which leads to Singapore Zoo.

A signboard at the junction marks out the trailhead as the Central Catchment Park Connector.

How Long is the Mandai T15 Trail 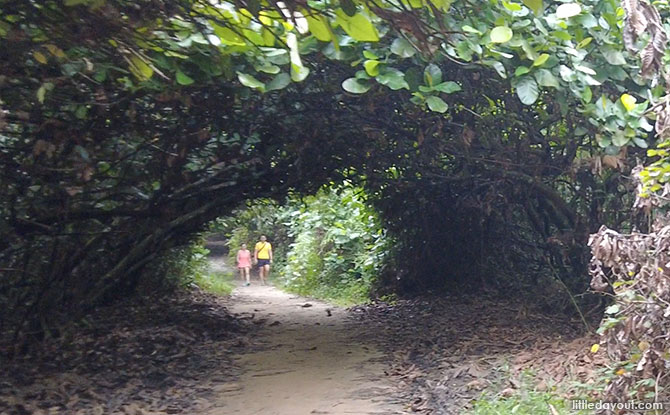 The Mandai T15 trail around 4.4 km long in one direction. The terrain is large flat but you will encounter some slopes as well. The path is gravelly in some areas. We’d estimate that this would require around one-and-a-half to two hours, depending on how fast you walk and how heavy the traffic along the trail is.

If you are planning to make a return trip, you will need to double that, of course.

Shared Track – Watch Out for Bikes 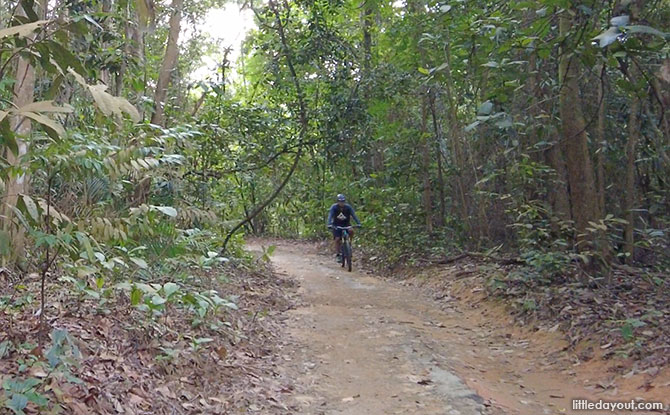 Mandai T15 trail is a shared track, which means that is it used by both hikers and mountain bikers. It is especially popular with mountain bikers as it provides a connection between the mountain biking trails around Bukit Timah and Dairy Farm to the park connectors such as Ulu Sembawang Park Connector in the north.

Hikers can expect to encounter mountain bikers every couple of minutes. Keep to the side to let them pass. They will often announce their presence by shouting “Bike!”. So keep both your eyes and ears alert for their approach.

If with kids, be sure to supervise them. The bikes can go past quite quickly. You’d want to keep them safe.

Stay on the Track 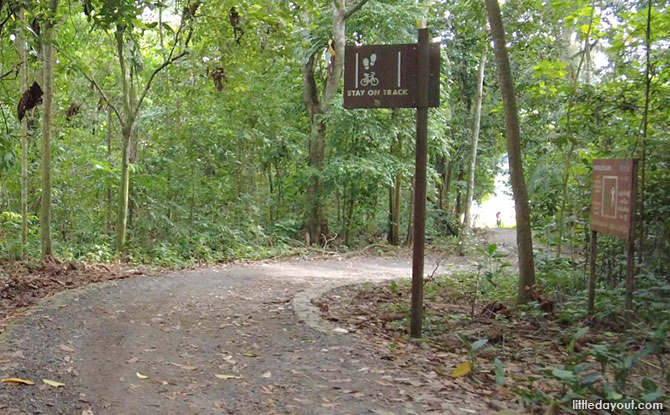 If you look at Google Maps, you will find that there seem to be several trails which you can take along the Mandai T15. However, there is really only one main trail that runs from north to south. 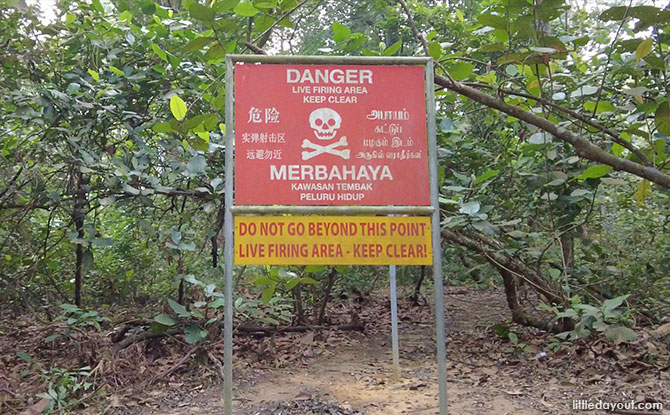 This track is well marked and even sealed at some spots. Stay on this path. Off the trail, there are warning signs of live firing areas and there are also military training grounds. Close to Mandai, there is the Mandai firing range which guys who have served NS may also remember.

There do appear to be many other paths around the whole area and it was possible to head down to water. However, many of these path seem to be “closed off” with signages now. 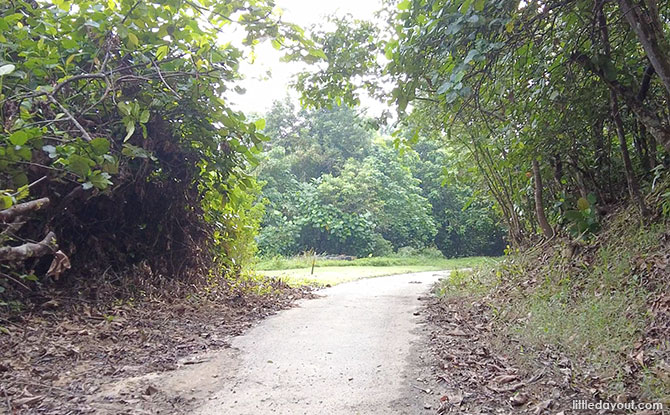 There is one sealed side road that branches off from the main track. This is located close to where the Kranji Expressway links up with the Bukit Timah Expressway. This road leads to a PUB pumping station located at the Upper Seletar Reservoir. However, there isn’t much to see here as the access to the water is blocked off by the facility. 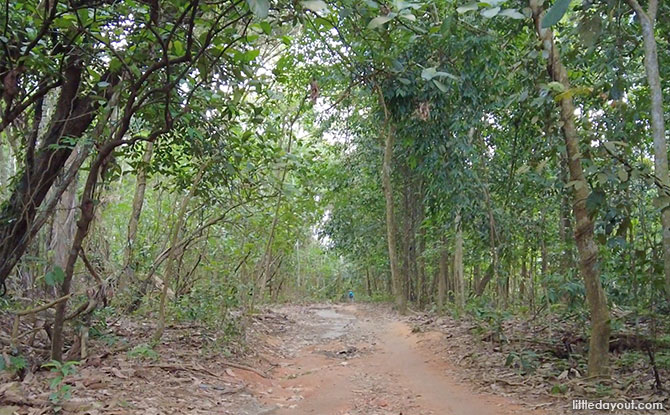 The charm of the Mandai T15 trail is its back to nature vibes. Along the Gangsa Trail in the southern half of the trail, keep a look out for birds as well as forest animals like mousedeer. If you are lucky, you may be able to catch a glimpse of them. 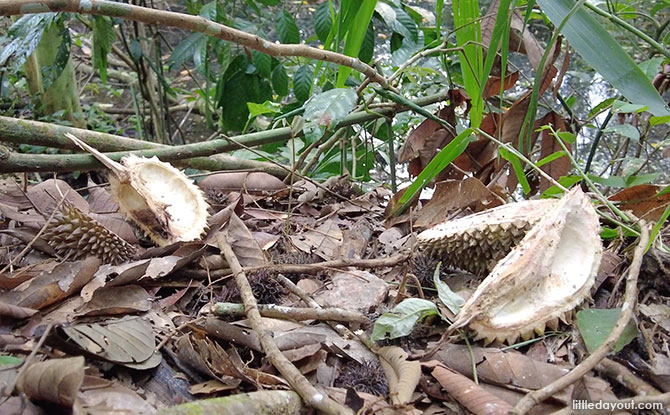 The Central Catchment Park Connector is the 1.9 km northern stretch of the Mandai T15 trail. Here, there is more evidence of past settlements in the area. Perhaps that is also why you can spot a lot of fruit trees as well. However, do remember not to disturb these trees as their fruits serve as food for the creatures of the forest.