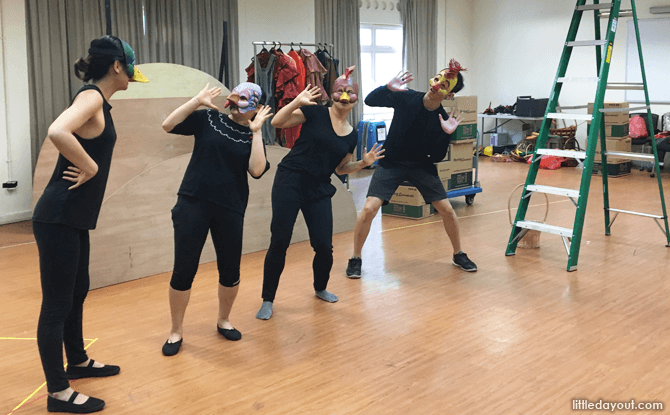 The theatre experience is often described as magical for its ability to entertain and transport audiences to a different world. And like magicians, theatre practitioners like to hold their audiences in suspense and surprise them with something unexpected.

But while magicians are known for never revealing their secrets, so they can keep audiences spellbound, I Theatre believes being open with trade secrets could actually make for a better audience experience in the long run.

Three Stories in the Coop

A musical production specially conceived and staged in the Year of the Rooster, I Theatre’s Poultry Tales is a triple bill of three well-known classic tales – The Goose That Laid the Golden Eggs, The Little Red Hen and Chicken Licken.

As with many I Theatre productions for young audiences, the fun-loving protagonists each go through a journey that helps them learn important life lessons and values.

In Poultry Tales, the theatre company takes this one step further and provides an additional educational journey for the audience too – demystifying the process behind bringing a story to life on the theatre stage.

Audiences will walk in to the theatre and find themselves looking at a stage still being dressed up, rather than a finished one that they have come to expect in a theatre show. They will have a glimpse of what goes on backstage and see how a theatre production, or in this case a musical, is put together.

Artistic Director for I Theatre Brian Seward said he did this to satisfy the curiosity of young audiences:

“Children always ask what happens backstage before the show starts, and what happens to make the magic work. We don’t reveal all the secrets, just enough for them to see how it works. The intention is not to reveal everything, but to build understanding of theatrical terms and elements.”

From Backstage to the Proscenium Arch

Having to bring one story to life on stage is a big enough challenge for any theatre group. To stage three stories is even more complicated. Add to that a lesson in Technical Theatre and one might worry that the educational effort could compromise the theatrical experience. To address this, Seward says they’ve planned it in a way that would not be distracting:

“I hope we’ve combined the two in a way that makes the story flow naturally into the technical explanations. And also the technical details magically transform into the story again. It shows how things are set up, but it doesn’t just teach, it’s a full-scale musical performance and will also be very entertaining.”

The actors will perform songs that introduce different aspects of the theatre or tell the stories as they unfold. This provides an interesting challenge for the actors, who find themselves playing not just their characters in the tale, but also the roles of backstage crew as well.

Elizabeth Loh, who plays the role of the Goose as well as an intern in the company, says the sharing of ideas is part of the storytelling and does not distract them from their roles.

“When I started out in theatre, I worked backstage as well, so it actually comes naturally and brings back memories of what I experienced. I think it’s interesting to play the part of a character sharing what she sees and experiences backstage.”

Theatre novices will enjoy the chance to see how the set comes together from a bare stage, and how different elements like lighting and sound contribute to the theatre magic.

So if you’ve been confused about the difference between a prop, a costume and a set, and have wondered what goes on behind the curtains, Poultry Tales is a must-catch that will enlighten and entertain you at the same time. 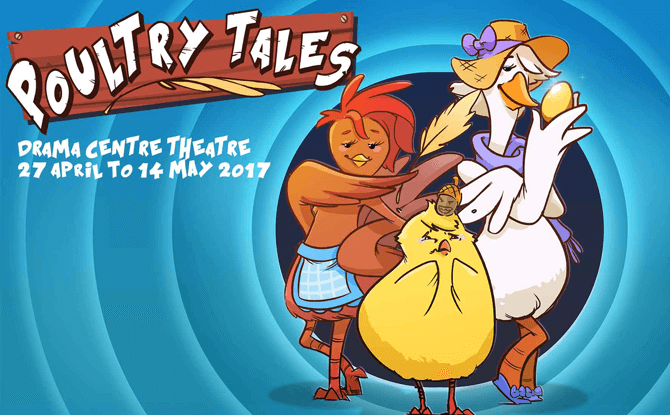