Home Play Behind The Scenes: Setting The Stage 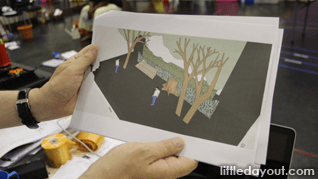 In a typical theatre production, the beautifully constructed stage is set and left for the production’s entire run. Bringing one theatre set to life and giving it depth to support one story is already no mean feat. Throw in a second thematically and visually different production, place it within the same theatre and have it play on alternate days and you have a whole new meaning to the word “challenging”.

This is exactly what I Theatre will be embarking to do at ACE! 2013 Festival Lite, being held at Alliance Française Theatre, from 20 May to 8 June 2013. It will showcase the premiere of two original children’s theatre productions – The Enormous Turnip and The Magic Porridge Pot – and you will literally see two sets on one stage, back-to-back!

After taking a look at the world of costume design in the run-up to The Little Red Hen, Little Day Out met with I Theatre to demystify what goes into theatre set construction, an essential part of any theatre production, in this second part of our four-part “Behind The Scenes” series.

“The set is important, because it helps to tell the story. But there also has to be an element of surprise, something unusual within it. Otherwise, it’s just a backdrop,” said Brian Seward, Artistic Director of I Theatre.

The element of surprise that Brian talks about is something theatre-goers attending ACE! Festival Lite at the 236-seater Alliance Française Theatre can look forward to when the curtains rise on 20 May 2013. With two larger-than-life stories playing as part of the Festival, The Enormous Turnip and The Magic Porridge Pot, audiences can expect the stage to help bring these animated stories to life.

Will the porridge overflow and cover the entire village on the set of The Magic Porridge Pot? How will the growth of an underground turnip be articulated on stage? Will the two sets in the same theatre look like peas in a pod? We too have to wait in eager anticipation to find out on the productions’ consecutive opening days.

“One of our biggest constraints was to reconcile two different productions using same set, and we have it done in such a way that the pieces can be moved about quickly, yet remain sturdy enough to last 27 shows each. The Enormous Turnip is set to a house and garden, against a backdrop of European music. To blend in the aesthetics, we localised the Magic Porridge Pot and set it in a Malay kampong within a forest. Audiences coming for both productions will see strong changes in the set,” promised Brian. 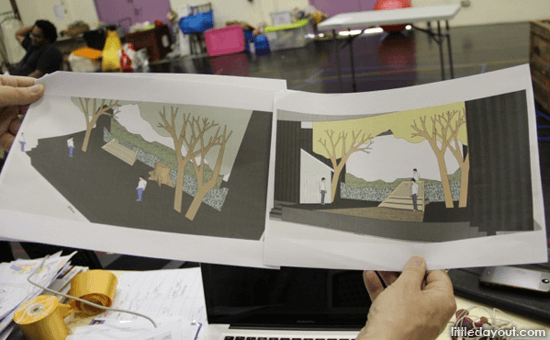 The set is the very first thing audiences see when the curtains go. It lays down the play’s time period and conjures up a particular atmosphere, be it rural or contemporary.

The key to set design is to ensure that it supports the actors’ performance and the first question any Stage Director will ask himself is: “What would be absolutely necessary to tell the story?” The answer to that lies in the script. If the story calls for a door, there is no running away from that and a door needs to be incorporated on stage for the actors to go in and out. Of course, with some creative license, a script can also end up being interpreted in many ways (and sometimes, a door may not end up necessarily being a door).

After deciding on the items needed, the Stage Director meets with the Set Designer to discuss the production’s requirements. The Set Designer brings his own experience and design aesthetics to the table and helps put together a coherent visualisation of the set. This eventually translates to a floor plan, with specific dimensions and elements that can be used to communicate to the actors where the items will be placed, and the look and feel of the production. 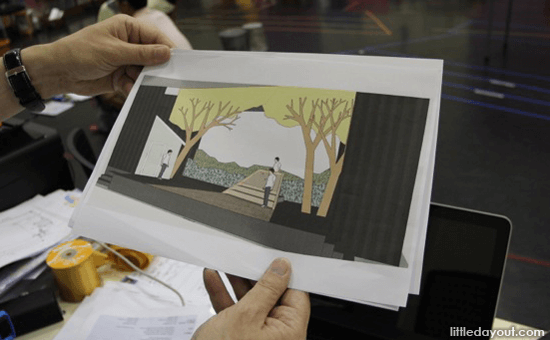 Outlining the Set on Stage

Most rehearsals take place without the actual set. Instead, line markings on the floor, similar to a 1:1 floor plan, stand in for the actual set. Thankfully, actors have a good imagination and can move around this imaginary set with ease. They even use the opportunity to determine if they will face any constraints while moving about the ‘set’. If constraints are identified, items may be added or removed as necessary. After all, if the set is beautiful but is dangerous or hinders the actors, it does not serve its purpose. 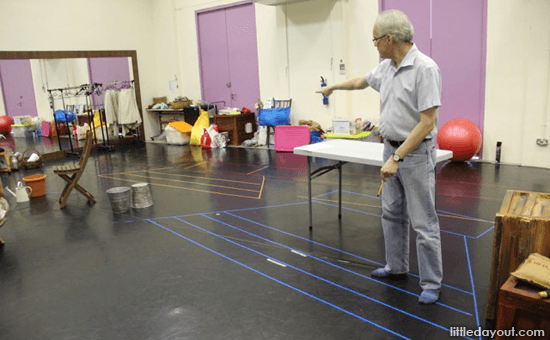 While rehearsals take place, the Artistic Director will keep liaising with the Set Designer and the Set Builder on the changes needed. Every change means time and money, so communication is crucial to keep costs down. Finalised design drawings and plans will be sent to the Set Builder and construction takes place a week before the show opens. Sets are usually made of wood, styrofoam and cloth, and for I Theatre’s children’s productions, can cost up to $15,000. 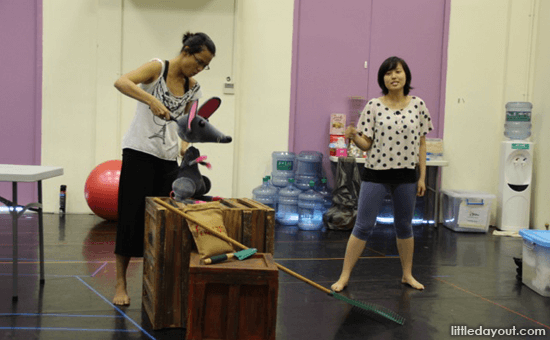 Setting It All Up

About two days before the start of the performance, the pre-fabricated parts of the set are moved into the theatre and pieced together into a complete structure. Some parts are built on-site to complete the stage. The Lighting Designer comes in thereafter to dress the stage with lights. Amazingly, actors finally get to rehearse on the actual physical set only a day or so before the production premieres.

What happens then? That’s where the creative juices of the production team comes to the fore. As Brian puts its, “At this theatre, there are no fly bars that we can use, nor trap doors to hide the turnip. However, you will see the set transform and change to make the performance more interesting.”

See the stage transform at I Theatre’s ACE! 2013 Festival Lite which is playing at Alliance Française Theatre from 20 May to 8 June 2013. Book your tickets for The Magic Porridge Pot and The Enormous Turnip through SISTIC now before they are gone!

This special feature on stage construction is part of Little Day Out’s Behind-The-Scenes Aspects of Theatre Production series to help young and old understand more about theatre productions. Read the previous feature on Costumes written in conjunction with The Little Red Hen here.

Check out these feature stories as I Theatre rolled out its 2013 Season: