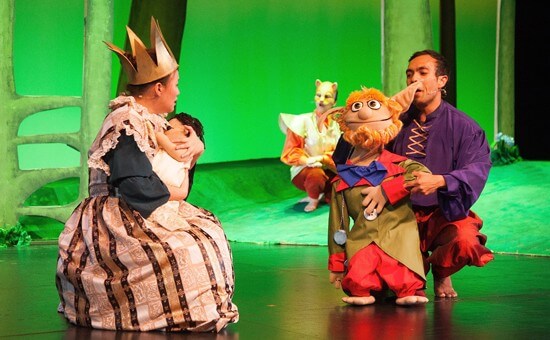 “I think we can have this conversation another time…”

I’ve not heard this phrase used so often in under two hours but it underscores the clever scripting that segues different tales enacted by a multi-talented cast.

Admittedly, I was sceptical when first told the show would cover eight fairy tales. When I opened the programme, the number had grown to nine! I sank into the cosy Drama Centre chair and readied myself for a long affair. Glancing over at my two juvenile charges – an eight-year old son and a friend’s seven-year-old daughter, I wondered how they would hold up.

The show began promptly with The Musicians of Bremen. As the theatre darkened, I reminded the kids of our pre-show talk about masks and reminded them that the masked creature on stage was just an actor and not a real animal.

If you are bringing kindergarten kids, this is worth remembering because children like to be prepared so they can boast later of not being afraid. (“Scared ? C’mon!” or “yah I saw the tail but it didn’t move by itself… so I wasn’t scared what…”). 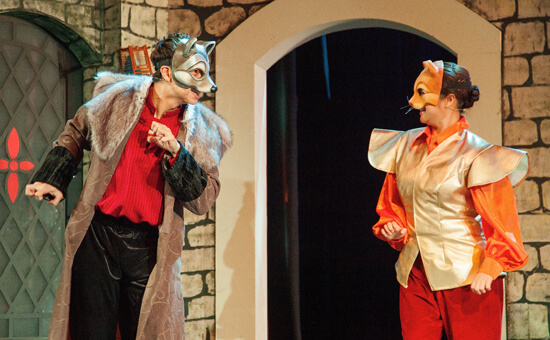 I Theatre’s costumes were elegant and not garish. The use of neutral colours permitted very clever variation between scenes where the same character, for example, the Rooster could easily morph into a puppeteer. Subtle enough for the children to appreciate it was the same person, but sufficiently different for them to follow his new ‘role’.

As we settled into the play, I had time to take in the gorgeous set. Before I could fully note the details of the set, I was captivated by the music and beautifully composed songs that were interspersed with the dialogue. As a classically trained musician with a soft spot for jazz, such fancifully scored pieces in a children’s show was a treat for me and a plain spoiling for the kids.

Overall, the music and the dialogue did not compete with each other. It was a finely-balanced blend, as summed up in one line spoken on-stage: they ‘make music together’. Children have it so good nowadays!

Cat told Rumpelstiltskin and while I had never liked the mini-man himself, I enjoyed I Theatre’s dramatisation of the classic story. An actor-puppeteer (the sometime Rooster) pulled Rumpelstiltskin around the stage and very skillfully spoke “Rumpelstilskinishly”! Physical theatre was also used in The Valiant Little Tailor where the main characters moved around on their knees, dwarfing themselves next to the hilarious giants of the tale. 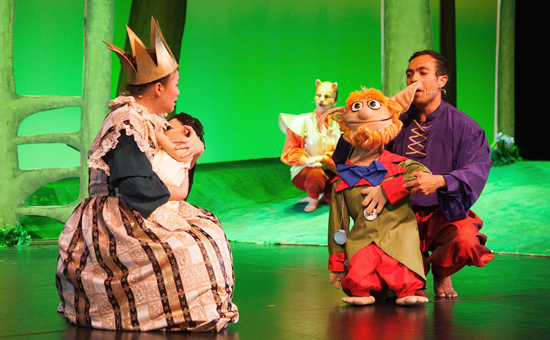 This was something I appreciated about the company of actors behind this show – such variety of talent, displayed with selfless energy.

In Rapunzel, done mostly against a storyboard of puppets, the spunky romantic conversation between the Prince and Rapunzel was reminiscent of Miss Piggy and Kermit. Rapunzel ended with the characters declaring the moral of the story, one I had previously been unaware of. It was an educational and fresh take on an old tale.

Rounding up Grimm’s Fairy Tales was the rarely told story of Lucky Hans and, by then, not all too soon for the kindergarten kids in the audience, the Wolf’s version of Hansel & Gretel.

Hansel & Gretel’s songs were sung in Singaporean NDP-style – earnestly, deeply and with lyrics such as “we will stand together as a family… There are no bonds as strong as blood… As a family…” Staged overseas, these might strike a foreign audience as awkwardly sentimental but they quite effectively hit the spot with the theatre’s audience. 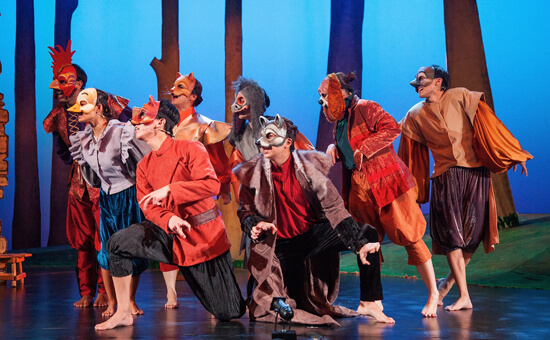 Overall, I Theatre’s Grimm’s Fairy Tales was a very professional and artistic work, done passionately with great breadth and depth. Our primary school kids don’t get enough of this mix of disciplines in their studies so the time at Grimm’s Fairy Tales was well spent. I would even venture to say that ticket prices are value for money, especially considering the ever-burgeoning prices in Singapore. Can you believe I recently had to pay $10 for six croissants! Ah well, let’s have that conversation another time…

About the Little Day Out Reviewer

Mei is a mother of three aged 9, 8 and 2 (when she remembers). Watching Grimm’s Fairy Tales has made her eager to bring her kids for another show soon.