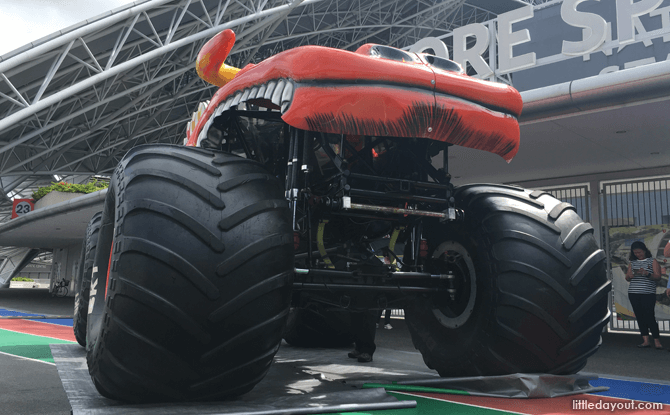 Monster trucks are oversized behemoths that can just as easily crush a car as they can jump high into the air. Watching the high-powered monster trucks going at it on a dirt track is a sight behold. Here are some fun facts about monster trucks.

3. At Monster Jam, their monster trucks use a blower to force air and fuel into the engine. This allows the monster trucks to accelerate from 0 to 100 km/h in 3 seconds.

4. Monster trucks tyes are customised for the track. For Monster Jam trucks, their tyre are 1.67 metres tall and 1.11 metres wide. After they have been fitted, they have to be hand-cut to suit track conditions.

5. Monster Jam’s truck bodies do not have a door. The body is made out of fiberglass and any doors you may see are painted on. To enter the monster truck, the driver has to climb in through a space underneath the body.

6. One of the first few monster trucks to gain prominent was Bigfoot back in April 1981. Originally, it was driven over a pair of cars to test the truck’s abilities. It then went on perform to crowds and the monster truck phenomenon grew.

7. Monster trucks are capable of doing agile stunts. These include wheelies (where they are on their back wheels), endos (the opposite of wheelies) and jumping through the air. Another favourite move is the donut, where they spin around in circles on the spot.

8. A last fun fact about monster trucks is that the world’s first monster truck front flip took place at a Monster Jam World Finals on 25 March 2017. Check out the ridiculous footage below!