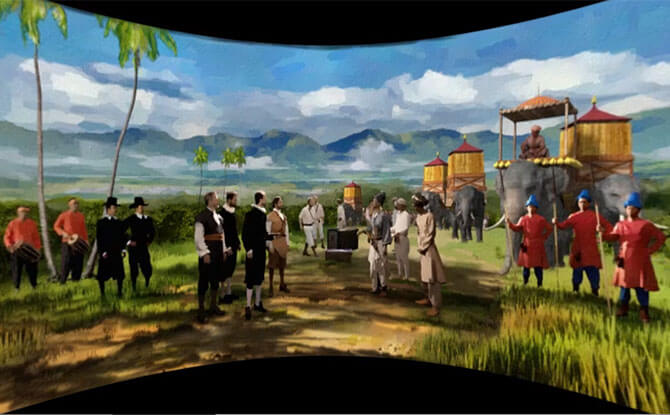 The An Old New World digital exhibition is about the East Indies and Founding of Singapore from 1600s to 1819. What was the world like leading up to the founding of Singapore? What brought the Europeans to our part of the world in the first place? And how did Singapore become a successful trading entrepot?

Go back in time 200 years pre-colonial Singapore, there’s lots to learn and see so feast your eyes for the ride.

Your family can navigate “An Old New World” online either on a guided tour or self-exploratory mode. There are two themes and four segments to the virtual exhibition: Knowledge & Power, Seeing the Indigenous, Museum Educators’ Tour (soon to be launched) and Explore the Exhibition.

Narrated by curators Daniel Tham and Iskander Mydin, the digital exhibition is brought to life with explanations and stories of the exhibits. Don’t miss out the personal collections from the families of Stamford Raffles and William Farquhar, as well as treasures from international museums like Royal Collections Trust, London.

The gallery gives you a HD 360 view, so don’t forget to click and view the rest of the gallery.

Knowledge and Power consist of seven chapters highlighting dominant powers in the region and how knowledge is closely linked to power.

The first chapter of An Old New World Digital Edition brings virtual visitors to see maps which show early European voyages to the East indies, interaction with the Orang Laut as well as important ports, settlements which indicate European commercial and political interests.

The maps are a good guide to the evidence of power in various areas. Visitors can click on the maps to read the more detailed explanation of the map. Interestingly, Jansson’s Map of Asia in 1632 included imaginary depictions of local peoples in respective costumes.

Exhibits also tell of the power struggles between the British East Indies and Dutch East Indies with each side producing propaganda to rally public support for the Anglo-Dutch Wars. Visitors will also see how natural history – plants and animals become topics of great interest for the Europeans. After all, the Rafflesia – the world’s largest and smelliest flower was discovered by Raffles. The first ever publication on the Rafflesia in Robert’s Brown “An Account of A New Genus of Plants Named Rafflesia” in 1821 is on virtual display.

Artworks during the time also gave an insight on the landscape, places, people centuries ago. The visual documents give such a serene and idyllic imagery of the past with lush and dense tropical vegetation. How things have changed!

The last chapter of Knowledge and Power is all about Singapore’s first British Resident and Commandant and his relationships with local communities. William Farquhar’s fluent command of Malay was critical in establishing rapport and aiding him in his responsibilities. His farewell gifts from local rules in Melaka and Singapore respectively are also on display. These clearly showed his popularity in the communities.

Join Iskander Mydin on a journey to see the interaction between the East Indies Companies and the indigenous people of the region in this theme. As the profitable spice trade drove the Europeans to the Southeast Asian region, this also meant the “foreigners” needed a lot of local expertise to keep them abreast and ahead of rivals.

The Orang Laut are the earliest recorded inhabitants in Singapore and have lived in its waterways since the 14th century. Being expert navigators of the sea, the Europeans often sought their knowledge on navigating the dangerous waterways. You will be able to see the tools they used and baskets they weaved to trap fish or keep their produce.

The virtual tour simulates the experience of being in the exhibition very well. You will be able to see the exhibits very clearly as well as the exhibit labels. For instance, get up close with the Chinese Junks, Malay, Javanese and Bugis ship models.

Locals helped the Europeans gather specimens from the jungles which contributed to an extensive record of the natural history then. Farquhar himself employed two local keepers to care for his collection of animals and birds in his residence.

Younger ones can get to see the indigenous tools used for hunting such as the blowpipe, bamboo quiver with arrows.

Keep an eye out for “Dick”’s portrait – a young Papuan hunter in a loin cloth. Raffles brought this full-scale portrait back to England in 1816. His story is an interesting one – he was actually freed from slavery by Raffles and taken into his service in Bali.

I was very impressed with self-exploratory option when the video was played. It felt like I had leapt into the highly visual exhibition, just as I did at National Museum. It was an immersive video experience watching the British East Indies Company meeting with the Ruler of Aceh before my own eyes. Perhaps it was as close as being there in person on that actual day hundreds of years ago.

As you go on a tour in the museum, enjoy the music and sound effects as you navigate the various galleries. You could also zoom in and out to examine each exhibit in each gallery.

Be sure to click on the map if you get “lost” in the high seas.

History Comes to Life in A Old New World Online

Staying home while history comes to life is a superb experience. Kudos to the National Museum Singapore team for bringing the exhibition to our screens. That’s one more thing to add to the must-do list during this circuit breaker.

Enjoy the voyage with the family!