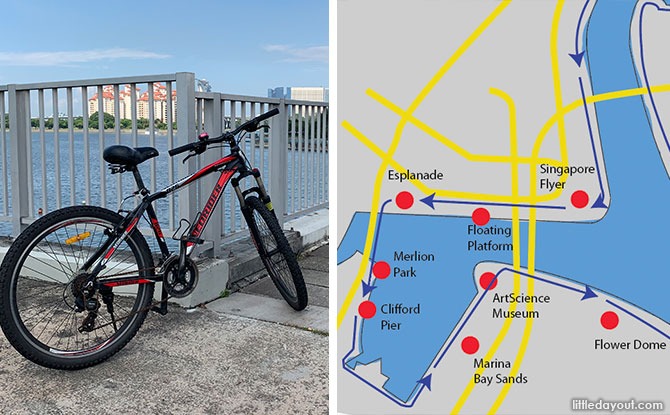 Cycling offers great freedom to explore different places and with the opening of a bicycle rental shop at Singapore Flyer, it is now even easier to rent a bike to go cycling and explore the Marina Bay and Kallang Basin area.

Recently, we did just that – rented bikes to go cycling around Marina Bay area. 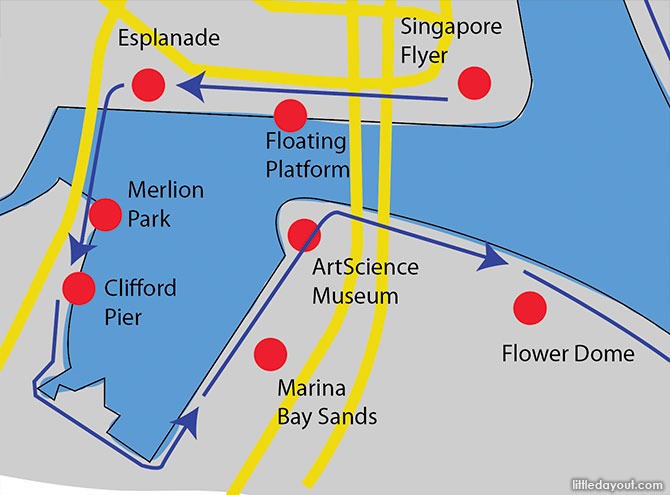 From Singapore Flyer, we took a ride along the waterfront, under Bayfront Avenue and the Helix Bridge towards Esplanade – Theatres on the Bay.

Raffles Avenue is normally quite a busy road. Less experienced or young cyclists should be cautious or closely supervised when cycling along this stretch of road, even if they are on the sidewalk.

Just after the Floating Platform, we were able to head back to the waterside path and continue on towards Esplanade. 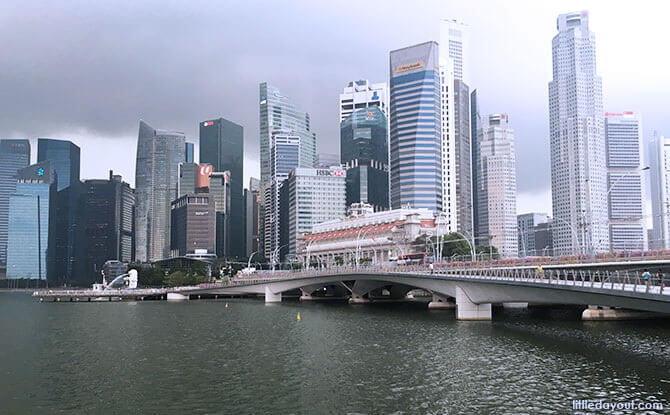 Past Esplanade, to keep on cycling around Marina Bay, we took the Jubilee Bridge, over towards Merlion Park and the famous icon of Singapore.

From there, it was an easy ride southward, past One Fullerton. Do take note that cyclists are supposed to dismount and push at the driveway in front of Clifford Pier.

Those who may be doing this route with young cyclists may want to forewarn them to slow down as they approach Clifford Pier as there may be cars turning into the driveway. 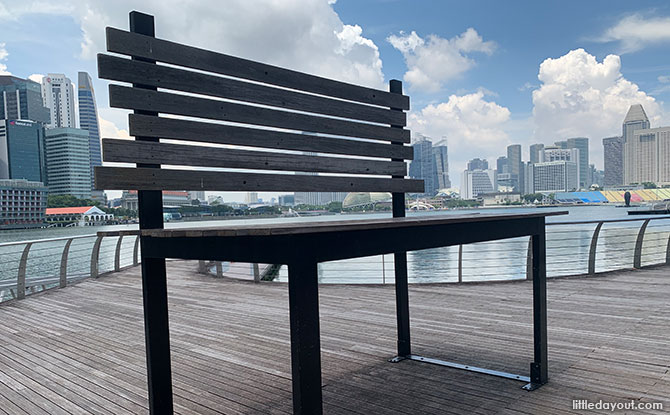 The rest of the cycling route around Marina Bay is fairly straightforward. We headed past landmarks such as the boarding point for DBS Sailing on the Bay, The Promontory, the Red Dot Design Museum and the Horizon Bench before arriving at the bayfront in front of Marina Bay Sands.

From Gardens by the Bay to Bay East Gardens 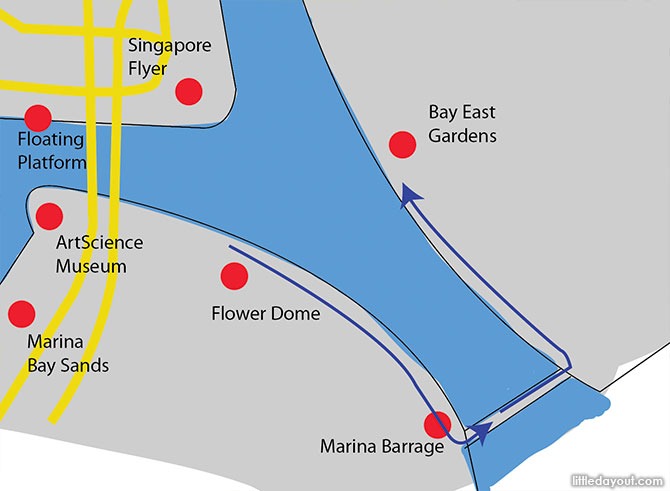 After passing by ArtScience Museum, we once again headed under the Helix Bridge and Bayfront Avenue to find ourselves at Gardens by the Bay, close to the Active Garden.

It is a pleasant waterside ride past the Cooled Conservatories as we peddled our way to Marina Barrage. We were now into the Kallang Basin leg of our bike trip. 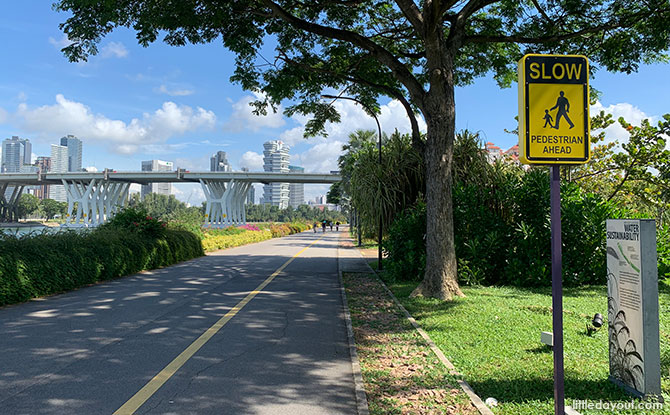 Crossing the Barrage, we found ourselves at Bay East Garden. This garden, where the Founder’s Memorial will be built, offers nice views of Gardens by the Bay and Singapore Flyer across the Kallang Basin. 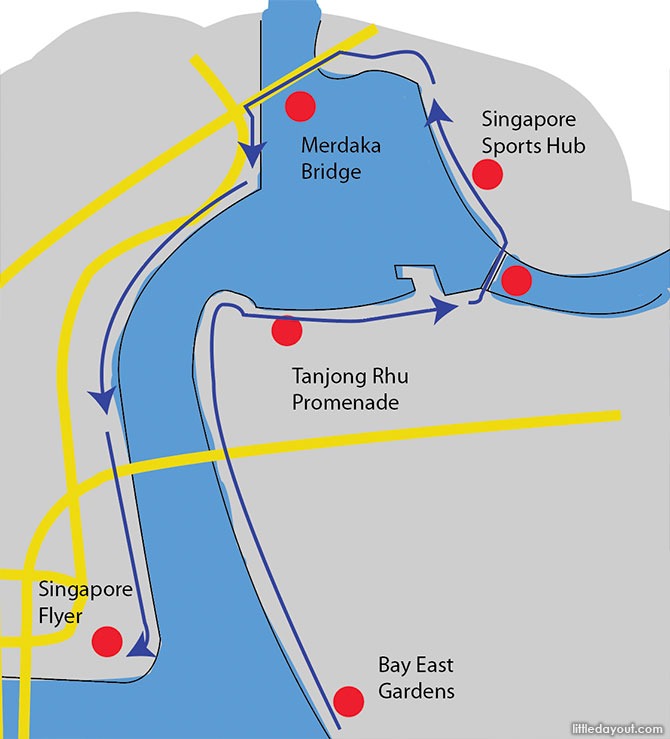 After going under the Benjamin Sheares Bridge, it was on towards Singapore Sports Hub along the Tanjong Rhu Promenade.

We had to dismount and push across the Tanjong Rhu suspension bridge to arrive at the Indoor Stadium and Singapore Sports Hub. 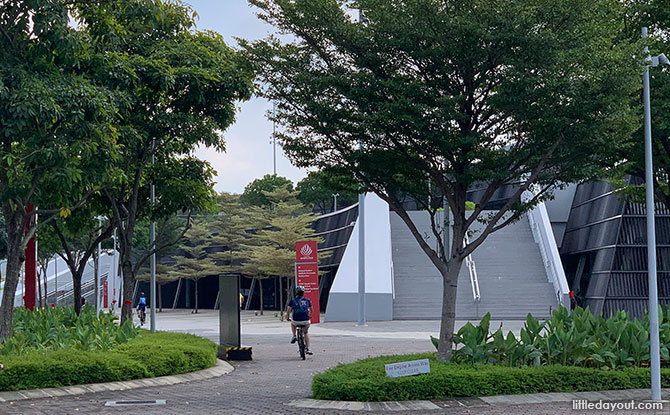 You can cycle past Singapore Sports Hub to reach Stadium Place road. 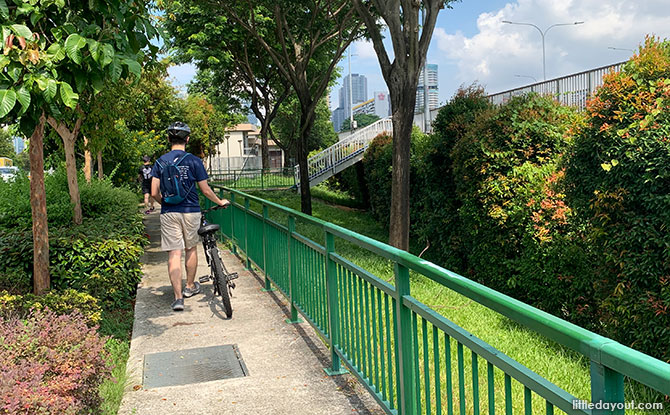 There are a set of stairs leading up from Stadium Road to Nicoll Highway. 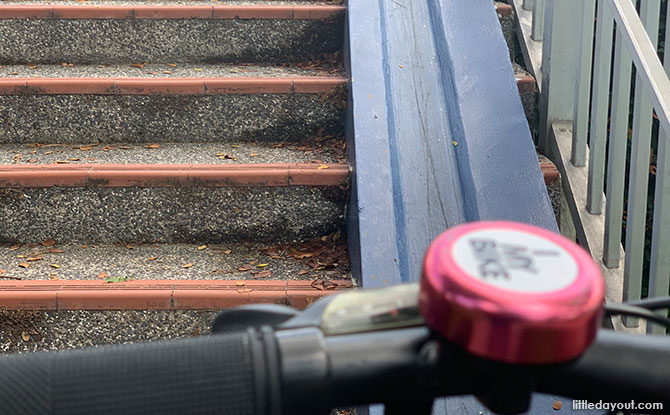 The stairs up to Nicoll Highway was thoughtfully equipped with a channel which the bikes could be wheeled up. 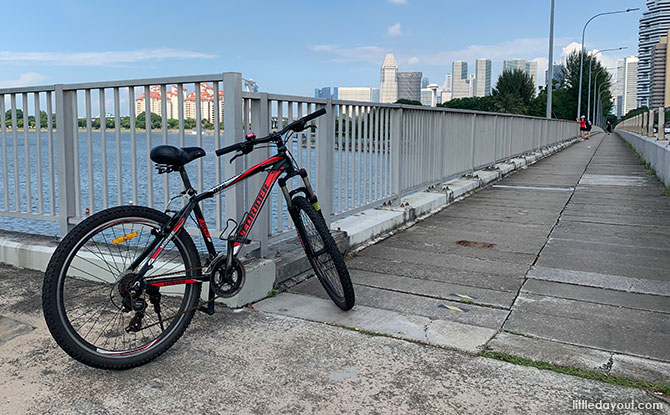 Merdaka Bridge provides a nice spot to admire the view of the Kallang Basin and the cycling route when had just taken. 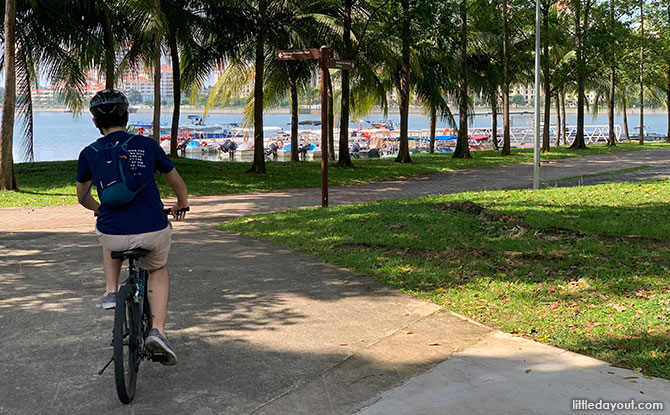 Another set of stairs brought us back to the waterside where the paths were well shaded by the sprawling trees and their branches.

Before long, we at the F1 Pit Building and racing to the “finish line” at Singapore Flyer. This cycling loop around Marina Bay and the Kallang Basin is an easy to moderate ride and a fun way to see the city from the saddle of a bike.

The Marina Bay / Kallang Basin loop is around 11.5 km long.