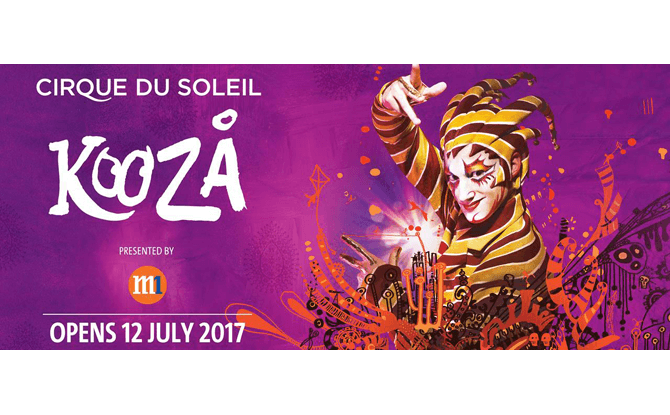 The Big Top returns to Singapore in July 2017 with Cirque du Soleil’s KOOZA. This new production combines thrilling acrobatic performances and the art of clowning, and will open at the distinctive blue-and-yellow Big Top will be along Bayfront Avenue beside Marina Bay Sands on 12 July 2017.

KOOZA is based on the story of “The Innocent”, a representation of the child in each of us. Audiences will go on a journey with “The Innocent” as he discovers a world of eccentric characters and the surprises along life’s journey. The show contemplates ideas such as strength, harmony, identify, fragility and power. It combines sheer human effort with slapstick humour, wrapped up in a colourful array of costumes and characters.

The show’s director and writer, David Shiner says, “The tone is fun and funny, light and open. The show doesn’t take itself too seriously, but it’s very much about ideas, too.”

A Box of Treasures

Cirque du Soleil’s KOOZA premiered in 2007 and has since been seen by over seven million people around the world. The name KOOZA is inspired by the Sanskrit word “Koza” which means “box” or “treasure”. The production features an international cast of 50 acrobats, musciains, singers and actors from 19 countries performing to a live music that fuses jazz, funk and Bollywood beats.

The New York Times says, ““KOOZA, a back-to-basics affair, presents the usual rubbery contortionists, fearless tightrope walkers and other gravity-defying daredevils. But what is special about this new production is that Cirque introduces some carefully choreographed chaos and old-fashioned sideshow spark… the real pleasures are the genuinely funny clowns.”

Tickets for Cirque du Soleil’s KOOZA go on sale to the public from 13 February 2017 online at SISTIC.

READ MORE: 10 Night Safari Exhibits That You Must See