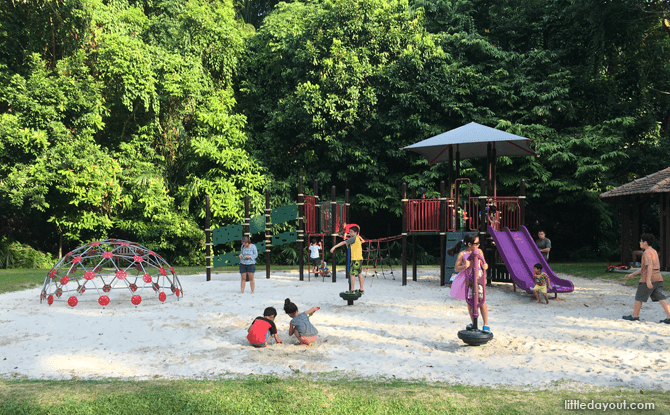 From the main road, it is hard to see what lies inside Bukit Batok Nature Park. Instead, around the edge of the park, well-shaded pathways lead into park, almost like mysterious lanes enticing visitors to step inside. 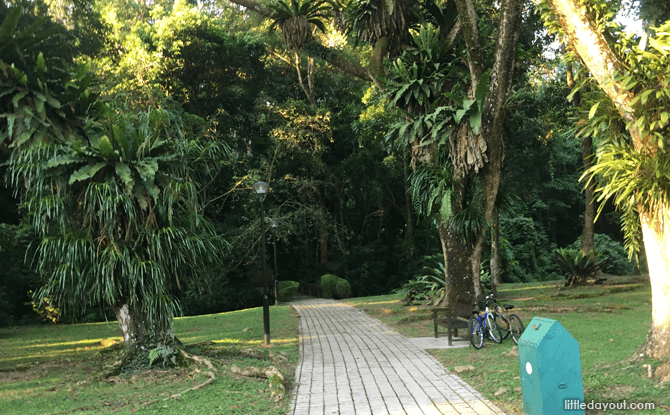 But there is nothing mysterious about Bukit Batok Nature Park. Instead, you will find it is a family-friendly park with varied facets to explore and experience.

At the Edge of Bukit Batok 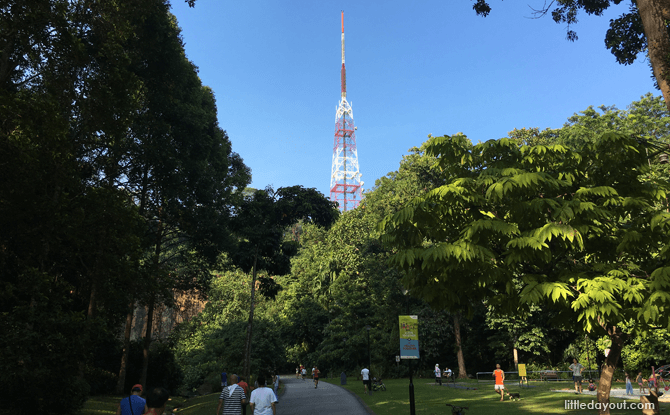 One starting point for a foray into Bukit Batok Nature Park is from Bukit Batok East Ave 2. From here, a gently inclined paved road leads into the park. Taking a walk along the straight road will eventually lead you towards the red-and-white transmission tower which marks the top of the hill, and where the quarry can be found. 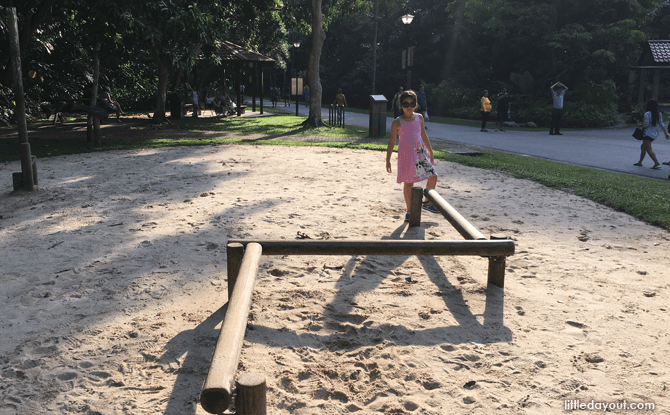 On the way to the quarry, there is an exercise area and children’s playground. 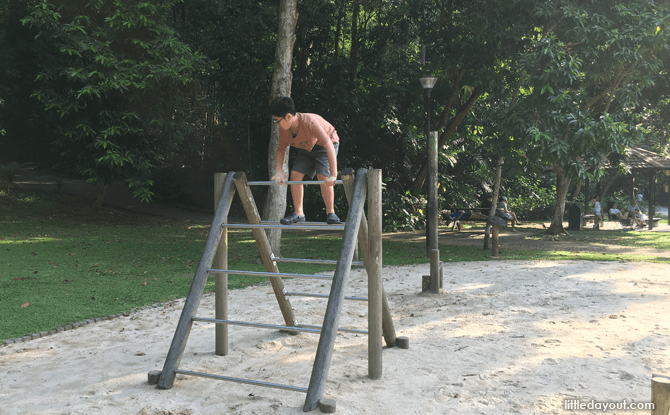 The exercise area has apparatus such as a balancing beam and miniature Jacob’s ladder that even kids can attempt. With a little guidance and support from parents, this can be great confidence-building exercise for the kids. 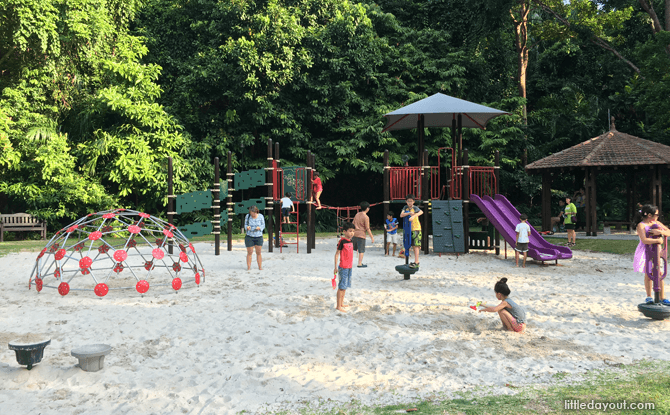 Just next to the exercise area is Bukit Batok Nature Park’s children’s playground. With a sandy pit around the playground, you can bring along a bucket and shovel to for some sand play. 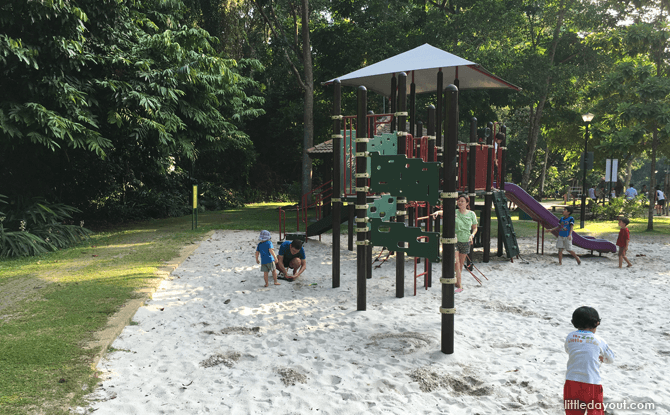 The main structure of the playground is a miniature tower with purple slides and a rope bridge. There are also climbing walls for kids to do their best impersonation of Spider-man. A metal climbing dome can also be found nearby. 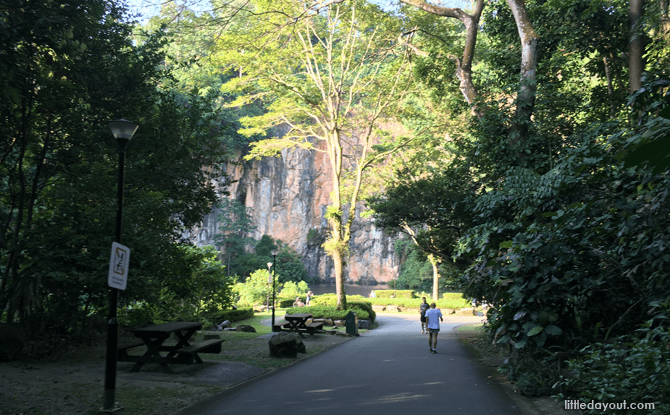 Just beyond the playground are the tranquil waters of the quarry pond and the cliff face of the former granite quarry. 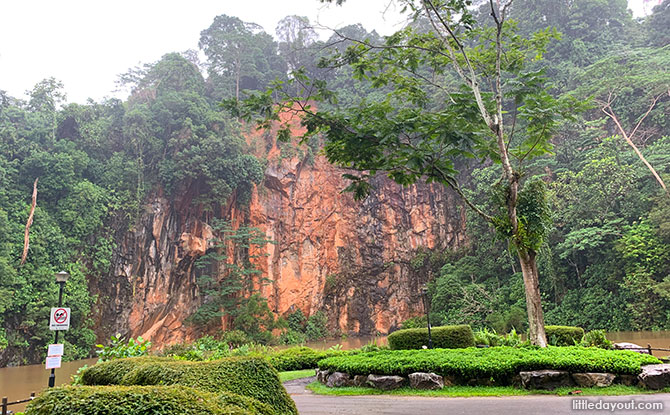 A plaza has been built for visitors to admire the view of the quarry. From the plaza, you can look up at the face of the quarry and the transmission tower high above. 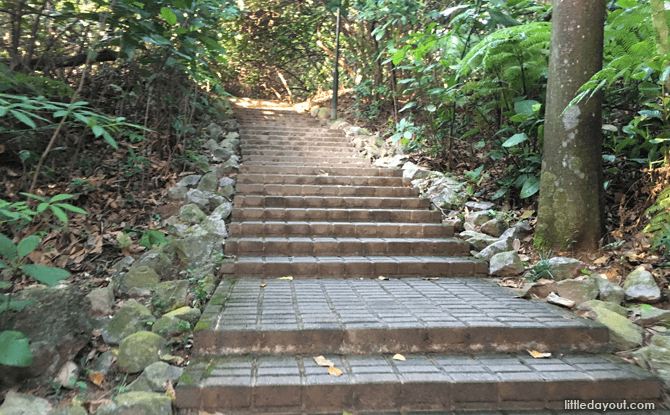 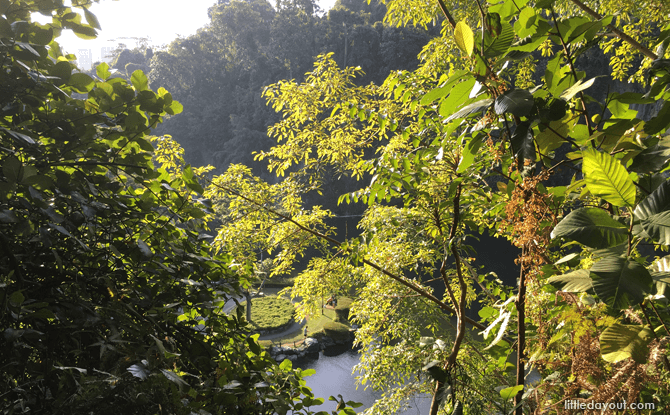 Follow the paths upwards and, lo and behold, you will find yourself looking down at the plaza below. 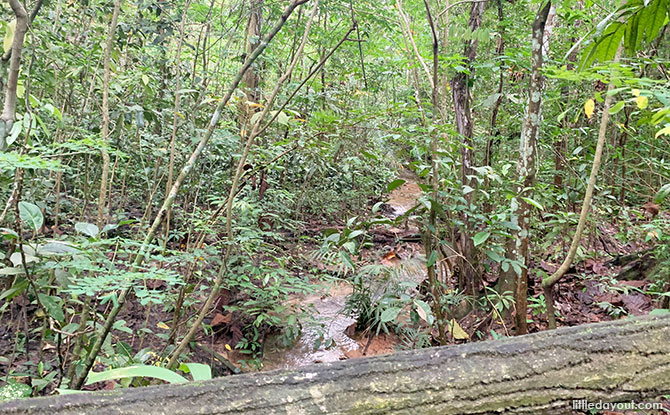 In another section of the park, you can find a little freshwater stream running through the secondary forest.

History on the Hill 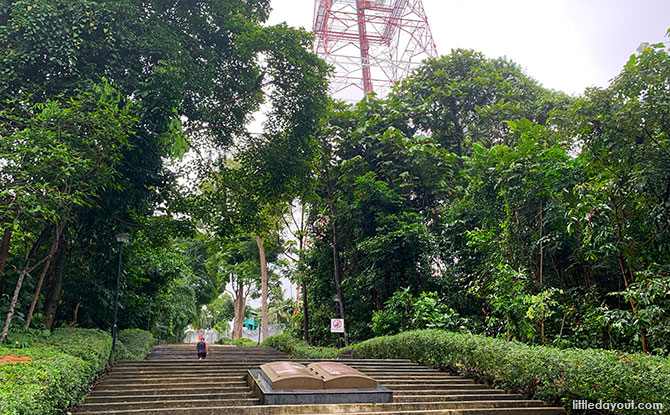 Also at the top of the hill is a historic World War Two site.

During the Battle of Singapore, the area around Bukit Timah was the scene of heavy fighting between the Japanese and the Allied forces. This hill was also significant as the Japanese Army had their headquarters at the nearby Ford Motor Company Factory.

After the British surrender, the Japanese had a shrine, Syonan Chureito, built to honour their war dead at the top of the hill. The Australian POWs, who were forced to build the shrine, were also allowed to build a memorial to their fallen as well.

When the war ended, the shrine was destroyed by the Japanese to prevent it from being desecrated by the returning Allies. 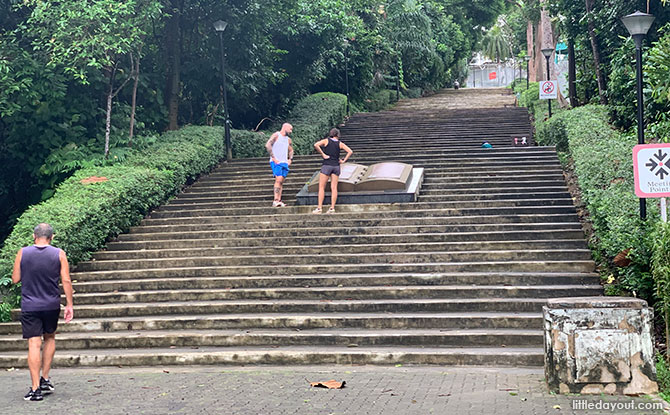 All that remains of the monument today are the 121 steps leading up to where the place the shrine once stood and two short pillars at the base of the stairs. A depiction of the shrine can be seen at the bronze marker at the foot of the stairs.

The red-and-white transmission tower now stands where the shrine once was. 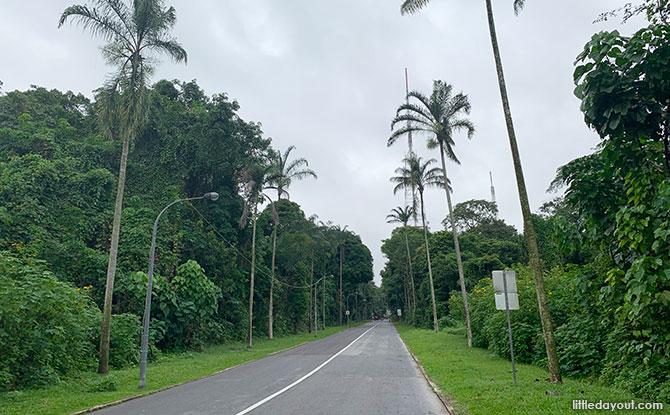 This area can also be reached at the end of Lorong Sesuai.

Look out for Nature at Bukit Batok Nature Park 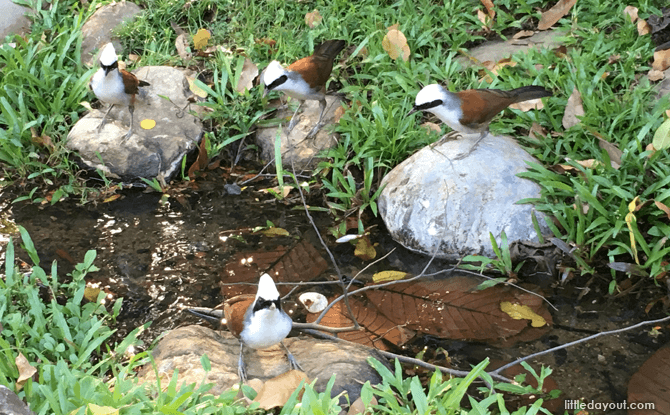 While at Bukit Batok Nature Park, keep an eye out for the wildlife. You may come across birds such as the White-crested Laughing Thrush. 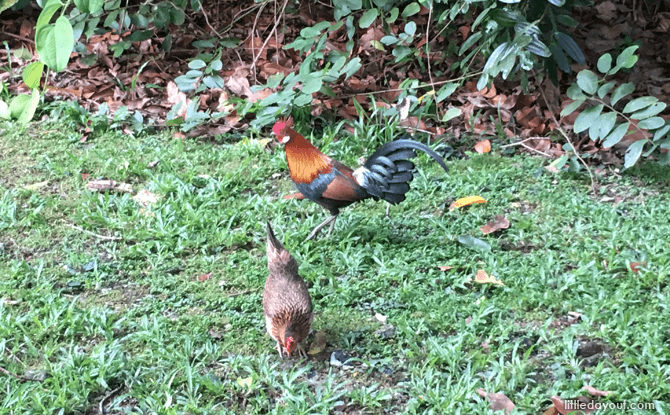 More common birds like chickens can be found in the park too.

One of the unusual features about the park are its signs. We’ve never noticed so many different signs in a single park before. These range from warnings about falling durians to instructions on where (not) to park. 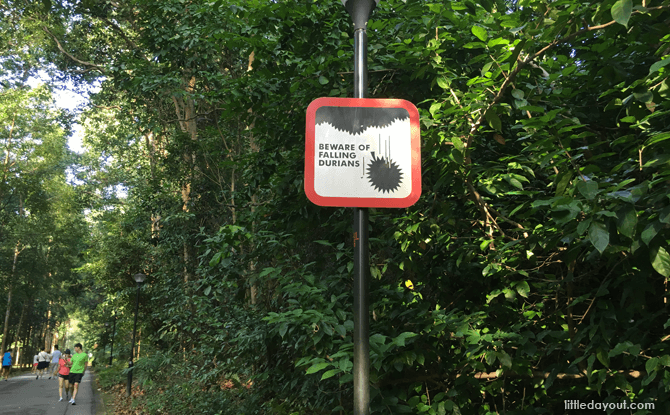 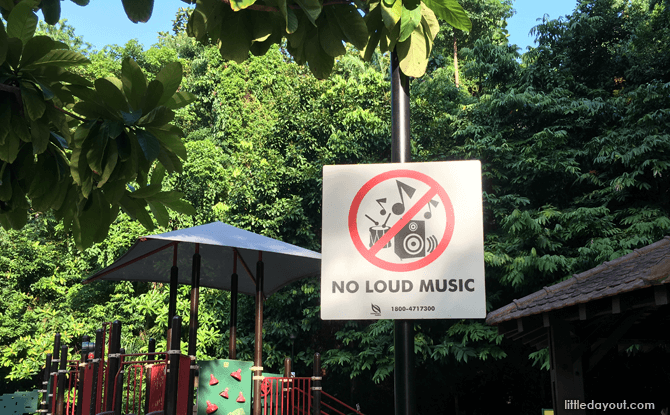 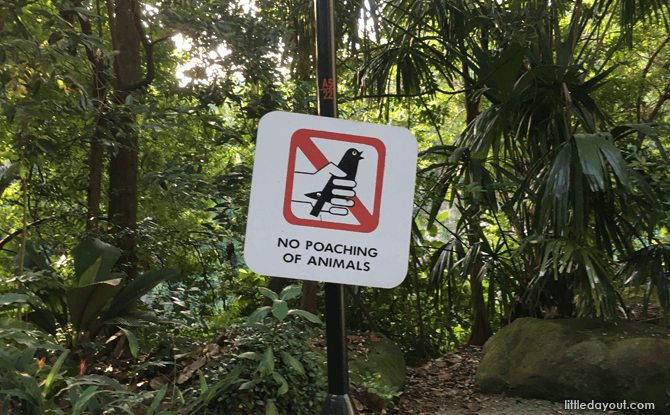 See how many you can spot them on your visit to Bukit Batok Nature Park too! Bukit Batok Nature Park is also one of the nodes along the Coast-to-Coast Trail.