Home Play Surviving the Japanese Occupation: War and its Legacies – An Exhibition at... 17 Feb 2017 Update – In a statement issued by Minister for Communications and Information Yaacob Ibrahim, Syonan Gallery: War and Its Legacies will be renamed Surviving the Japanese Occupation: War and its Legacies.

Even before it opening on 15 February 2017, the new gallery at the former Ford Factory had already attracted its share of controversy. Some were upset that the name of the new exhibition seemed to validate the three-and-a-half year Japanese Occupation when Singapore was renamed Syonan-to, one of the darkest periods in the country’s history.

Prime Minister Lee Hsien Loong even weighed in on the issue through his Facebook page, captioning one of his photos, “The name of the exhibition, “Syonan Gallery: War and Its Legacies”, at the Former Ford Factory in Upper Bukit Timah Road has understandably caused strong reactions. We cannot erase our history or bury the past. The exhibition is a reminder of a traumatic period in our history and the suffering our pioneers experienced when Singapore lost its freedom and even its name.”

All this underscores the deep-seated feelings that still surround this period in Singapore’s history – even 75 years after the fall of Singapore.

We paid a visit to the gallery to discover what lies beyond the signboard outside.

The exhibition is housed in the historic former Ford Factory along Upper Bukit Timah Road. The Art Deco style building was the Ford Motor Company’s first Southeast Asian motorcar assembly plant. It opened in 1941 but production stopped soon after when the Japanese invaded Malaya. After the war ended, it carried on operating from 1947 up till 1980. 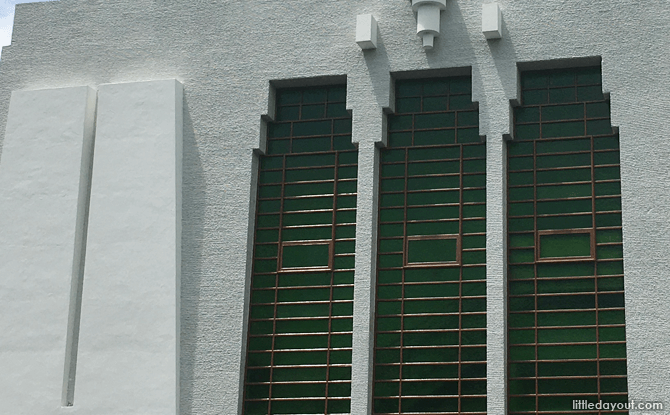 The former Ford Factory is most notorious for the events that took place in 1942 when the Japanese Imperial Army took over the factory and setup their military headquarters there on 13 February.

On 15 February 1942, after the British made the decision to surrender, the Surrender Party made their way from Fort Canning Hill to the Ford Factory at Bukit Batok Hill under a white flag.

It was here that the British formally surrendered to the Lieutenant-General Yamashita Tomoyuki at around 6.20 pm. Hostilities were set to cease by 8.30 pm.

At the present day gallery, the exhibits are divided into four sections – Introduction, Fall of Singapore, Becoming Syonan and Legacies of War.

In the first section, you get to delve into the history of the Ford Factory and gain insights into prewar Singapore. A highlight here is an interactive table that features a 1950s photograph of the factory.

Today, the former Ford Factory building is surrounded by condominiums and busy roads. The old aerial photo shows how what it looked like back it the day. Press a button and landmarks on the photo-table light up for a clearer view.

The next section goes deeper into the events leading up to the fall of Singapore from different viewpoints. It examines the British build up of defences such as efforts to mobilise a Civil Defence force. Another interesting perspective is from the Japanese as they prepared to go to war. One artefact on display is a Japanese send-off banner which was used to commemorate the conscription of a soldier before he left for war.

In this section of the gallery, you will also find the most historically significant room in the building, the Ford Motor Factory’s boardroom where the surrender took place.

You can step into the room – just don’t try to make use of the wooden door as it is locked. Instead, go around the corner where an open doorway awaits. Inside the boardroom room, a multimedia presentation mixed with archival footage provides an account of the events leading up to the surrender that took place in that room. 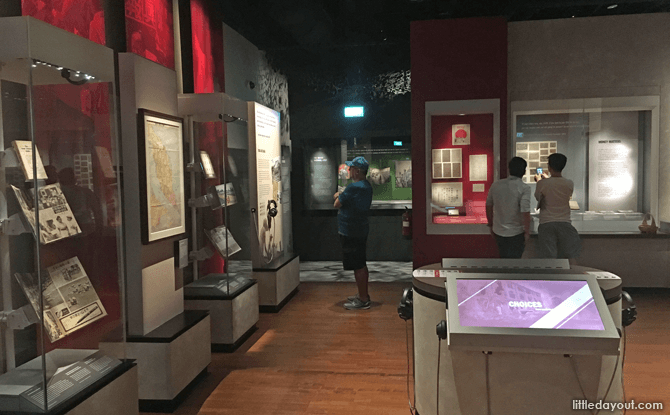 After the fall of Singapore, there was a 3 ½ year period of suffering and hardship for the people of Singapore during the Japanese Occupation. 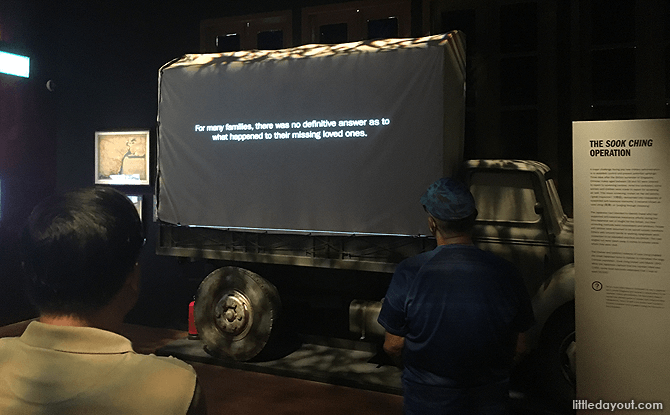 A particularly terrifying time was the Sook Ching mass screenings which targeted those deemed to be anti-Japanese. You can watch a chilling presentation about this in the Becoming Syonan section of the gallery.

Common items and oral history accounts provide a personal view into life during the Occupation. 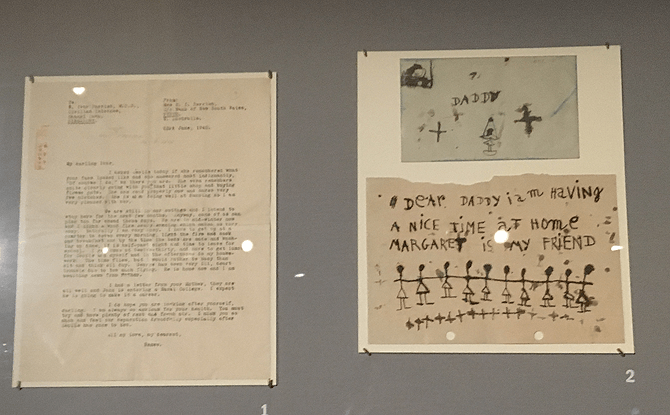 One particularly touching exhibit is a series of personal letters written to an Edward Ivor Parrish by his wife, daughter and parents. Parrish was held as a prisoner of war at the notorious Changi Camp. 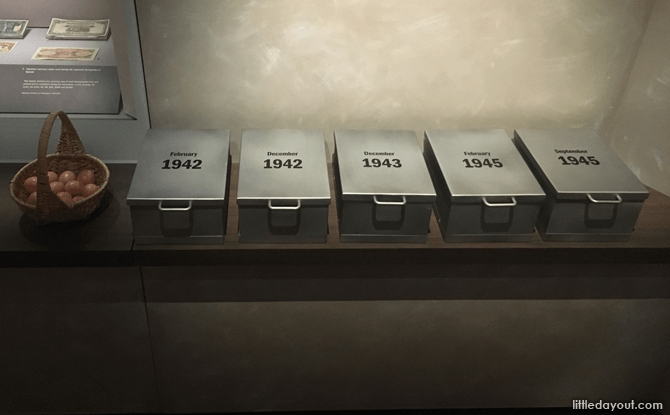 All aspects of life were affected by the Japanese occupation. Illustrating how the cost of living was affected, there is a hands-on exhibit which shows how disproportionately the price of eggs went up over three years. 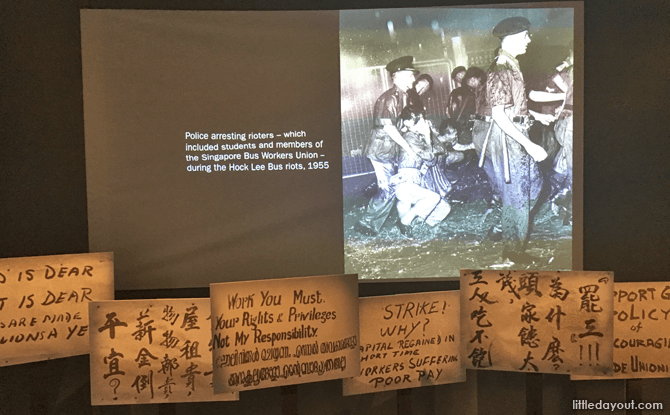 The final section of the gallery examines the war’s aftermath. It covers the war crime tribunals, dealing with post-war social issues and the road to self-rule and eventually independence.

The exhibition ends with poignant oral narratives by those who lived through the war. To the side of the building is a patch of garden devoted to crops commonly cultivated during the war. Dubbed the Syonan Garden, the vegetables grown here include sweet potato, tapioca and yams. 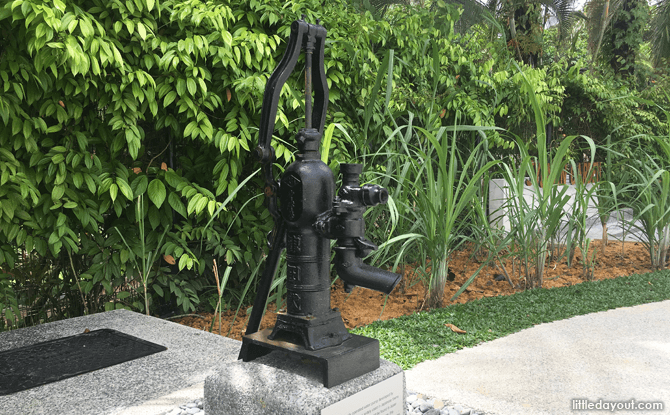 Also at the Syonan Garden is a manual water pump. This was a way in which the people of Singapore got their water supply during the 1940s.

Taking Away Memories from the Old Ford Factory

For today’s younger generation, the events described in gallery may seem a world part. For others, it will bring back memories of stories told by parents and grandparents about the hardships, cruelty and suffering faced during the Japanese Occupation.

On the whole, we found the exhibits at Surviving the Japanese Occupation: War and Its Legacies to be intriguing and well presented. However, some effort will be needed to pause and take in the information found at the gallery.

While we don’t think it is good to dwell too long on this dark chapter in Singapore’s history, it is also important to remember the past and the lessons it can teach us. In this respect, we can appreciate the Surviving the Japanese Occupation: War and Its Legacies exhibition and its role in our collective memory.

Surviving the Japanese Occupation: War and its Legacies – An Exhibition at Former Ford Factory

It is also possible for schools and organisations to request for a tour. Use the booking form on the gallery’s website.