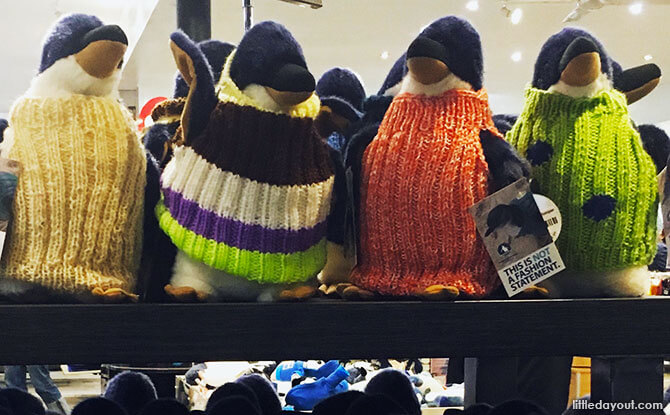 Almost two hours away from Melbourne by car, Phillip Island attracts countless visitors. And what is the main draw? The Phillip Island penguins, of course.

Pulled by the magnetic power of the Phillip Island penguins, we too made the drive to the island (which is connected to the mainland by a bridge), 140 km south of Melbourne.

There are other attractions on the island too, of course. For example, a family-friendly maze and a go-kart circuit, but the main attraction was the chance to see Phillip Island’s famed little penguins.

The little penguin, sometimes referred to as a fairy penguin, is the smallest species of penguin. They make their homes in burrows on shore but head out to sea to hunt for fish. They can stay out at sea for as long as four weeks at a time.

As we pulled up to the parking lot at Phillip Island Penguin Parade Park, we were heady with anticipation of viewing the little penguins.

We had purchased our tickets online before arriving and made our way to the gates for pre-purchased tickets entry.

It was 5 pm and the visitor centre was already filling up.

As it was wintertime, we were sure to bundle up warmly. Having said that, even when it isn’t winter, it is a good idea to come dressed warmly. The penguin parade starts from the beach where the Phillip Island penguins return to shore from the ocean.

We took a stroll down the boardwalk to the beachfront. The boardwalk leads past the penguin’s hillside burrow-homes.

When we arrived, we manage to find some seats at the bleachers which face out to the ocean. Very soon after, the bleachers were filled with fellow eager penguin-watchers.

The Ranger gave an introduction to the Phillip Island penguins. He thanked the crowd for money spent on the experience – every dollar goes towards supporting the penguin reserve.

He ended off with a final reminder that no photography of the penguins is allowed, with or without flash.

Finally, as darkness starts to fall, a small huddle of penguins emerged from the water. They made their way past some seagulls, up to shore, sending the bleaches into a frenzy.

It took a while before the next small group of penguins arrived.

The parade of penguins that evening is sparse.

According to a ranger, as it was currently breeding season, penguins can choose to stay out at sea for longer. It is during nesting season that they have to constantly return to their nests to feed their chicks.

However, as we returned to the warmth of the visitor centre, we were delighted to see some of the little penguins also returning to their cosy burrows on the hillside.

They charmed the visitors with their waddle up the hill as they returned to their nests.

At the visitor centre, there was a big commotion underway. A penguin wanted to cross the pathway which visitors were using to return to the visitor centre. The Rangers made everyone stop in their tracks to create a passageway for the penguin to cross. It was like the parting of the Red Sea or a train crossing. In this case, it was 60 tourists lined up like a guard of honour contingent watching one single penguin cross the road.

Phillip Island penguins are a big draw and Phillip Island nature park presents a good opportunity to view these cute little creatures in their natural habitat. Even though it may not always be the hoards of penguins invading the beach that you expect to see, just catch the little penguins waddling up the beach and all will be right again.

READ: The Best of Melbourne with Kids