Singapore’s four wildlife parks saw almost 400 babies, coming from 107 species, born or hatched in 2020. Represented among these newborns are 29 species which have been listed as threatened under the International Union for Conservation of Nature’s (IUCN) Red List of Threatened Species.

Among the baby animals were a pair of Malayan tiger cubs. They were born on 27 December 2020. This was the first successful birth of Malayan tigers at Wildlife Reserve Parks since 1998. The Malayan tiger faces extinction together with five other remaining sub-species of tigers around the world.

The new tiger cubs are being cared for by their Intan at an off-exhibit area. They are being monitored by the animal care team via closed circuit cameras.

Another new addition at Night Safari is a Malayan tapir calf named Bintang. Since his birth on 29 June 2020, he has transitioned from his “watermelon” coat to a two-tone one which associated with adult tapirs.

The southern three-banded armadillo duo, Rocha and Rolar also became parents on 5 September 2020. The little one is known as Bento, which means blessed in Portuguese. 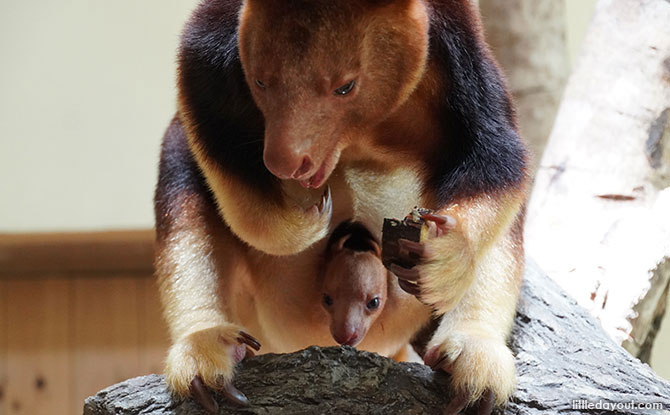 At Singapore Zoo, the Goodfellow’s tree kangaroos Makaia and Nupela welcomed a male joey on 4 February 2020. Named Malolo, which means ‘rest’ in Tok Pisin, he can be often seen snoozing with mom Nupela.

River Safari welcomed three births of the West Indian manatee. Two of the calves were born to first time mums Canola and Joella.

“A key goal of breeding wildlife in our parks is to achieve sustainable populations of species under human care. These animals act as ambassadors for their wild counterparts, connecting people with wildlife and help us tell their story through community engagement and education. Depending on species and circumstances, these zoo-born progenies may also serve as assurance colonies that could one day be used to strengthen wild populations,” said Dr Cheng Wen-Haur, Deputy CEO and Chief Life Sciences Officer, Wildlife Reserves Singapore.