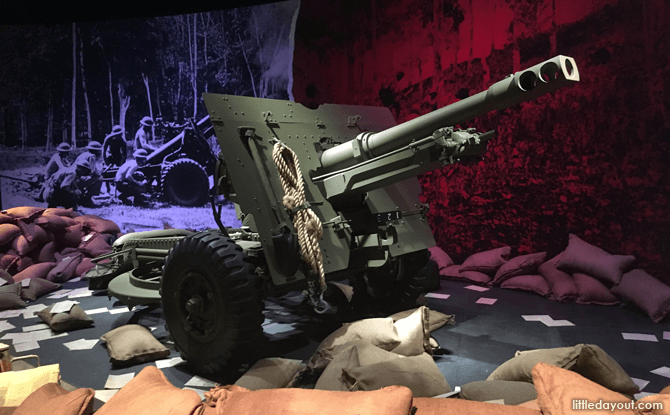 On The Eve Of War 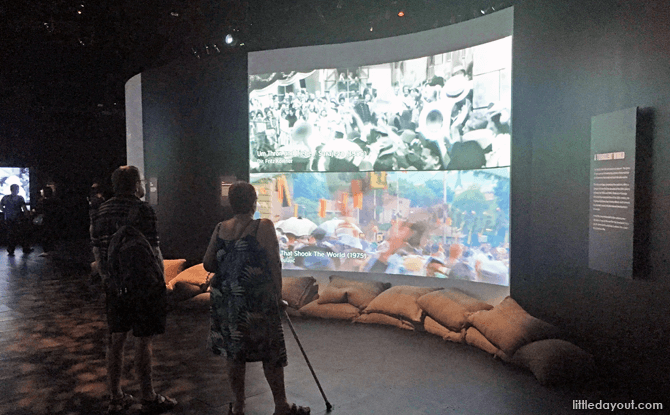 The Witness to War exhibition opens with a series of multimedia presentations that set the scene for the years leading up to the fall of Singapore in 1942. 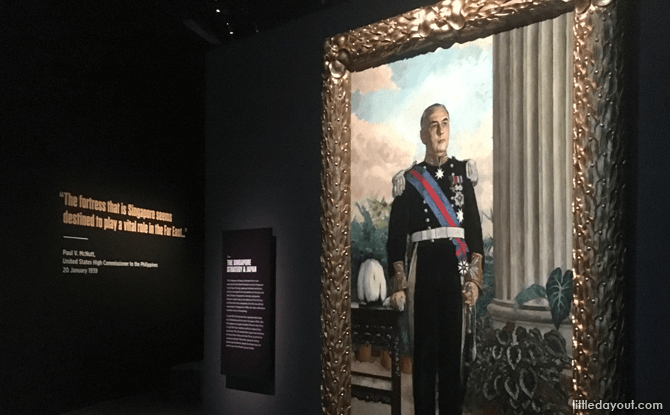 These lead up to the eve of the fall of Singapore and the section is presided over by a portrait of Sir Shenton Whitelegge Thomas painted by artist Xu Beihong. Sir Shenton Thomas was the last Governor of the Straits Settlements and the man-in-charge at the time of the fall of Singapore. During the war, he chose to stay in Singapore and was imprisoned in Changi as a Prisoner-of-War. 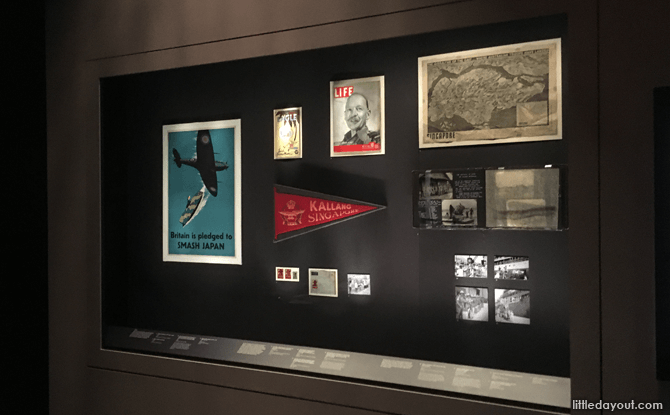 There are displays which provide perspectives on the impact of the war on life in Singapore, including some that address the question of what happened to the Japanese living in Singapore. 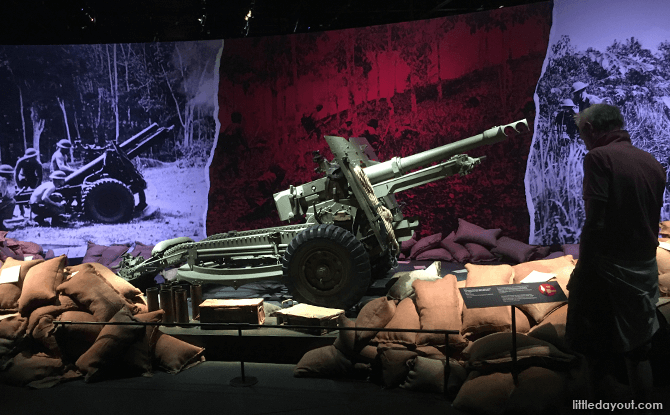 A star artefact on display is a British 25-Pounder Field Gun from the National Collection. Here, international perfumery Givaudan, the global leader in the creation of flavours and fragrances, has re-created the smell of gunpowder to accompany the 25-Pounder Field Gun display. 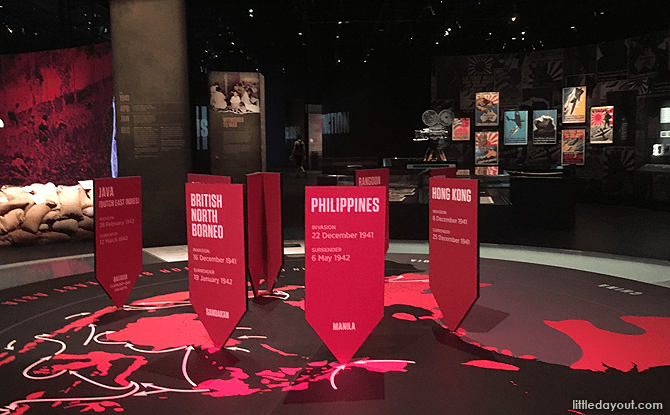 A huge, round “war room” table at the Witness to War exhibition provides an overview of the events leading to the fall of Singapore.

Surrounding it are artefacts, many on loan from overseas museums. Items on display include the sword of General Tomoyuki Yamashita, a Japanese Army bugle and a poster featuring Bruce Lee’s grandfather, Ho Kom-Tong, engaging in fundraising activities in Hong Kong.

Witness to War includes several other notable galleries that introduce different perspectives to the war.

A Child’s Perspective is a family activity space intended to allow families to guide their young ones through the complex topic of war. This activity area of Witness to War provides young visitors a glimpse into what it was like for young people such as themselves during the war. 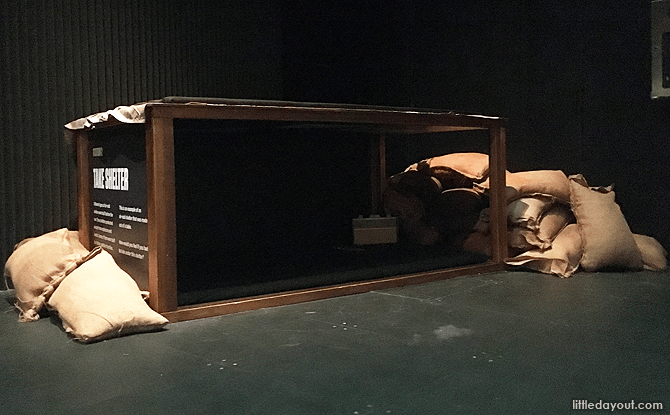 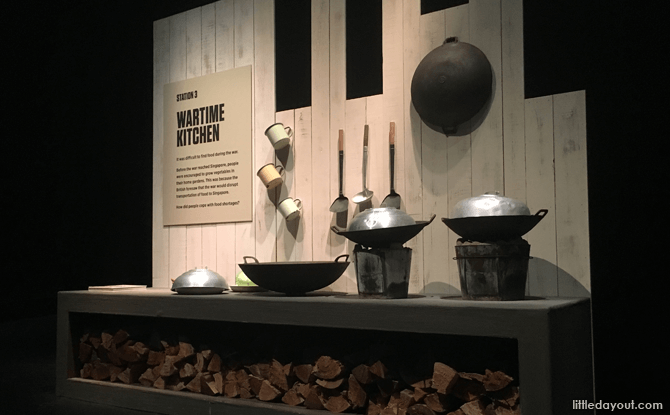 There is a make-shift air raid shelter, war-time kitchen and displays that ask the question whether to stay or leave one’s home.

The exhibition also features four story pods that provide intimate accounts by those who went through the wartime experience. 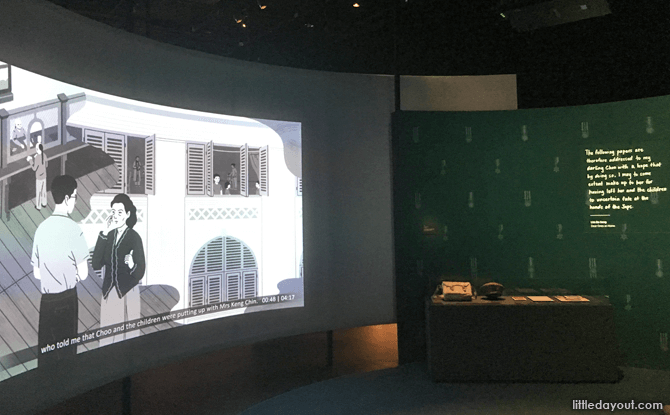 A section of the exhibition is devoted to war hero Lim Bo Seng. On display are artefacts such as his personal diary, being showcased to the public for the very first time, which offers a glimpse of Lim Bo Seng as a husband and father.

Director of the National Museum of Singapore, Angelita Teo, said, “With Witness to War: Remembering 1942, we have adopted a fresh approach – to look at the events that led to this watershed event, explore the shared memories of World War Two in the region, and hear from ordinary people who lived through those extraordinary times. This is the first time that the National Museum has collected war stories on such a large scale. The in-depth focus on and presentation of these rich experiences is also a first for us. The 75th anniversary of the fall presented the perfect backdrop for it, as we felt an urgency to record these war memories before they become lost and forgotten. This is an exhibition not just for Singaporeans, but also for the world. We invite everyone to remember 1942 with us, as we examine our past and try to build a better legacy for our future.”

READ: 6 Exhibitions in Singapore Taking Place During the Year-end 2017