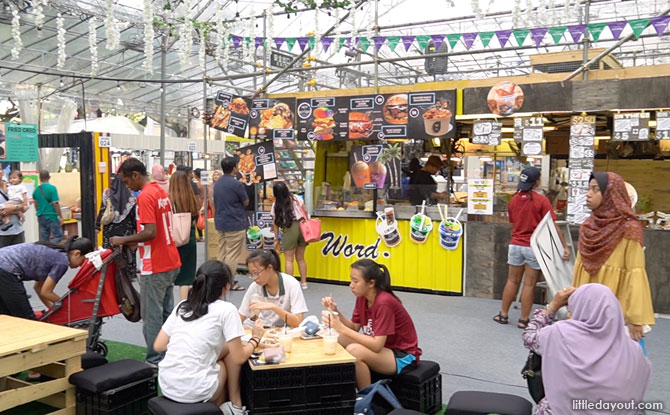 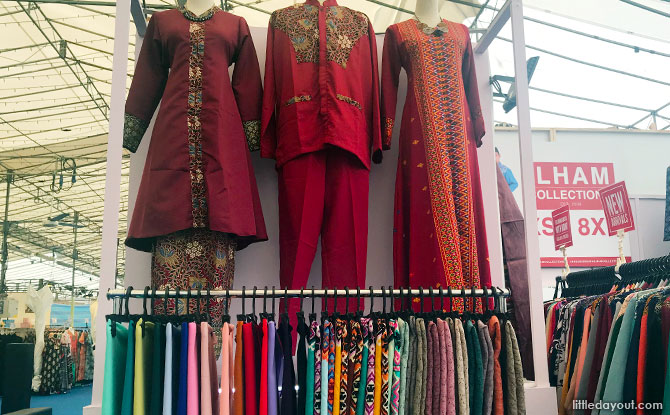 Take a walk around the bazaar and you’ll be sure to notice shops selling colourful baju kureng and baju melayu (traditional Malay attires for women and men respectively). Besides the traditional attires, various decorative items like rugs and Islamic calligraphy paintings are also found in the bazaar. There are plenty of things to look at around the Geylang Serai Hari Raya Bazaar. 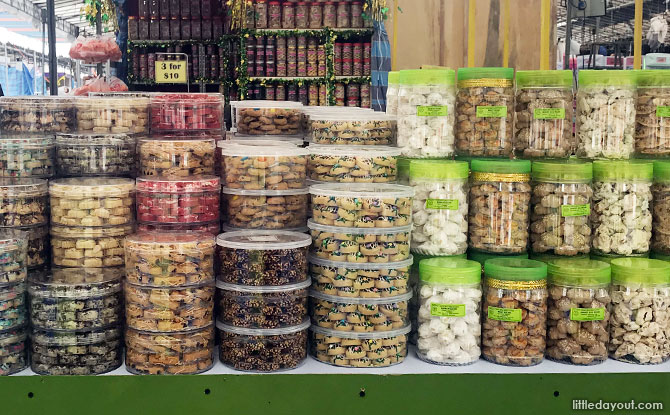 If you want to stock up on your Hari Raya goodies and kuehs, you can do so at the bazaar. There are plenty of shops selling a large variety of traditional biscuits and snacks around the Geylang Serai Hari Raya Bazaar. These delectable handmade goodies include kuih koya (mung bean biscuit), kuih bangkit (tapioca biscuits) and kuih semperit (dahlia butter biscuits).

A Spread of Mouth-watering Foods 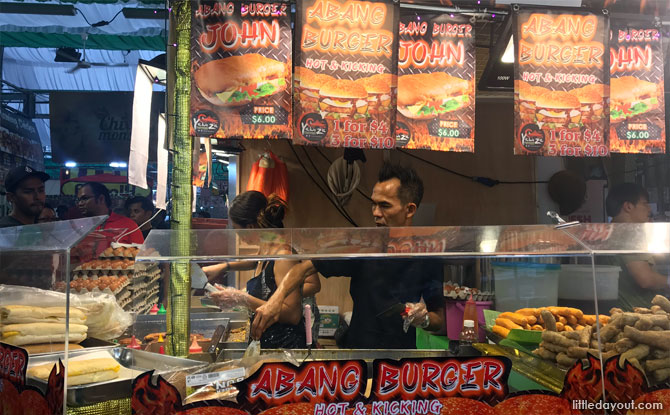 Have your pick of traditional Muslim dishes such as dendeng (thinly sliced flavoured dried meat), ayam percik (Malay roasted spiced chicken) and other delicious foods. Quick bites such as the Ramly Burger and Abang Burger can be found throughout the bazaar. Nowadays, the Geylang Serai Hari Raya Bazaar also has many modern, hipster food options to satisfy the younger generation of visitors. Praffles (prata waffles) and boba pancakes are some examples of unique culinary experiences that attract the crowds each year.

Each year, Changi Road, Geylang Road and Sims Avenue get dressed up with lights and light installations for the Hari Raya Light Up. When visiting the Geylang Hari Raya Bazaar in the evening, take the time to enjoy the festive lights that decorate the Geylang Serai district during this time of the year.

Being the biggest of all local Hari Raya bazaars, the Geylang Serai Bazaar is one of the most anticipated bazaars of the year. With hundreds of stalls serving traditional Malay cuisine, modern food creations and selling traditional and decorative items, the bazaar never fails to draw throngs of people, especially in the evenings. Do come prepared for the crowds, but also take the time to enjoy the festive atmosphere as people from all ethnicities come together at the bazaar. 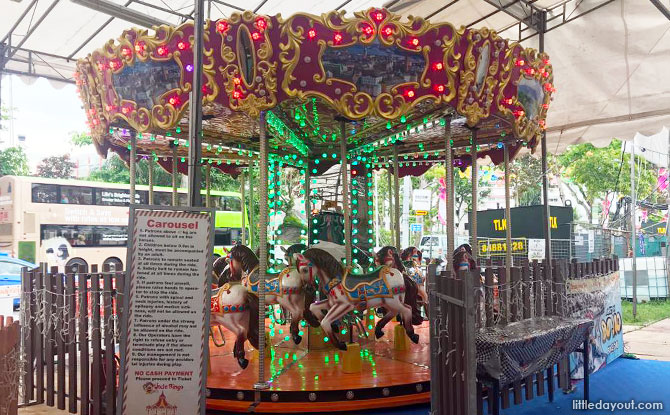 The Geylang Serai Hari Raya Bazaar also has various carnival rides. Ride on the Carousel, Tea Cups and Pirate Ship or enjoy the many games stalls offering games like “Fishing” and the “Balloon and Dart” game. Kids can enjoy these carnival games and rides while at the bazaar.

Visiting the Geylang Serai Hari Ray Bazaar is an enjoyable experience for visitors of all age groups and cultural backgrounds. Be sure not to miss it!