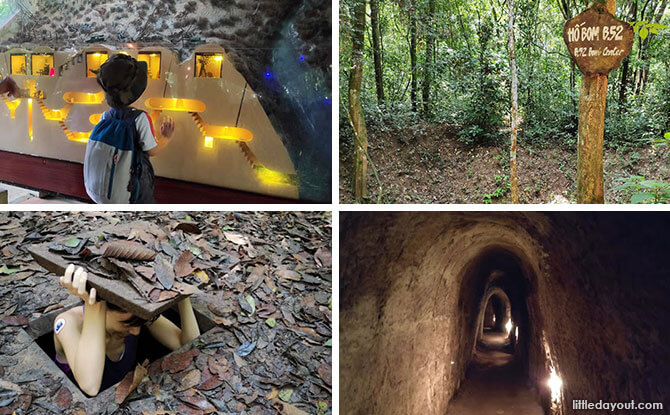 One of the fiercest and longest battles ever fought was in a country not far from us – Vietnam. The Vietnam War, which ended just four decades ago, was not just a war of ideologies but one with long-term consequences due to the use of chemical warfare.

The Longest Hand-dug Tunnels in the World

Believe it or not, the 250km of Cu Chi Tunnel system was mostly dug by hand. It stretched from the outskirts of Saigon all the way to the Cambodian border. The tunnels are mainly dug during the monsoon season when the red clay earth was soft and rock-hard during dry seasons. Its ingenuity lies in the network which it created by linking villages and strongholds, even shielding entire village populations from the raining bombs. 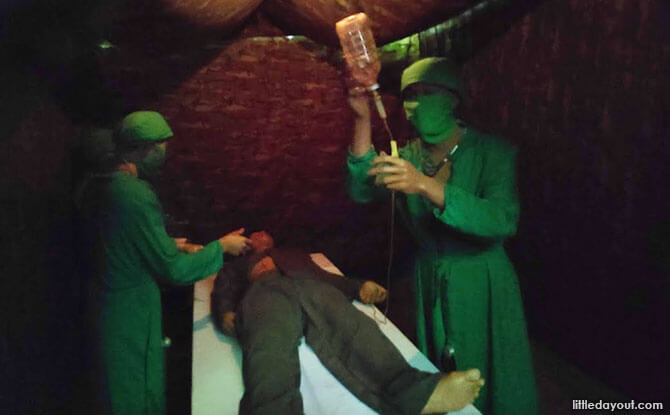 It has various rooms for different purposes, kitchens with concealed chimneys, bomb-making rooms, first aid and surgery rooms, strategising meeting rooms and deadly trapdoors which would kill enemies if they were activated. The deepest level led to the Saigon River, for emergency escape situations.

Don’t let the two-hour journey from Ho Chi Minh City to the tunnels intimidate you. We found the tour worth the trip.

We chose to join a small group tour to a less crowded part of the tunnels known as the Ben Duoc section. This is more popular with the locals rather than the tourists.

The Ben Duoc section also features the original tunnels which are not upsized to fit bigger torsos. Be sure to ask for an experienced English-speaking guide for this tour as the local guides at the tunnels do not speak English. 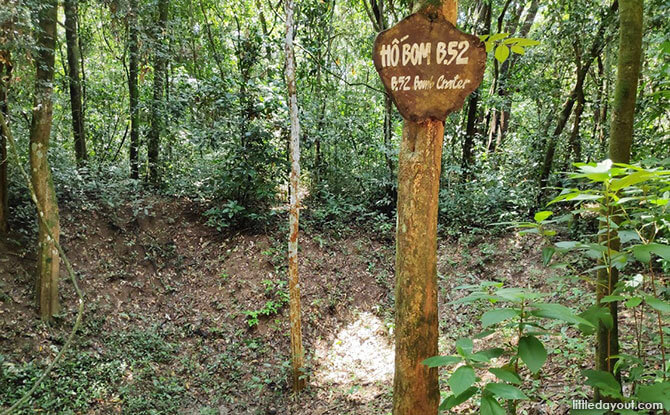 The Cu Chi Tunnels are located in the forest, away from civilisation and the frenzy of the city. Be sure to wear long pants and spray on the repellent to ward off mosquitos. Malaria was one highly common sickness that afflicted soldiers during the Vietnam War.

There are many questions the children may ask about the tunnels – how did the soldiers breathe 10 metres underground? Where did they find water or even food? How did they stay underground and remain undiscovered for such a long time? 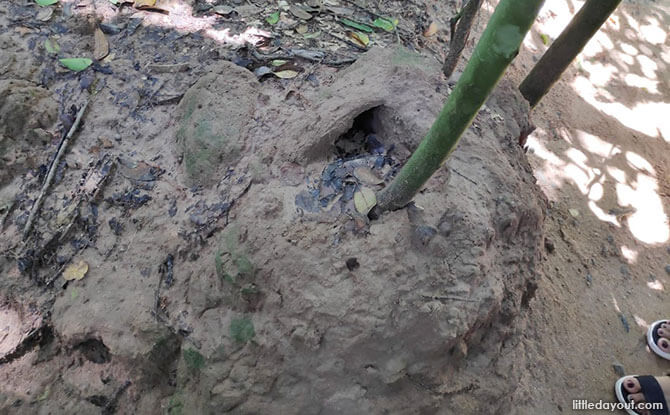 To breathe underground with no ventilators, the Vietcong used termite mounds, both manmade and natural, to facilitate airflow in an inconspicuous way. Tunnels were also made such that airwells would link the deepest level underground to the top, ensuring there was some precious airflow.

Still, staying five minutes in a tight, dark space underground would already be a challenge to most.

The Vietcong’s resilience in living underground proved to be a formidable force against their enemies during the war. 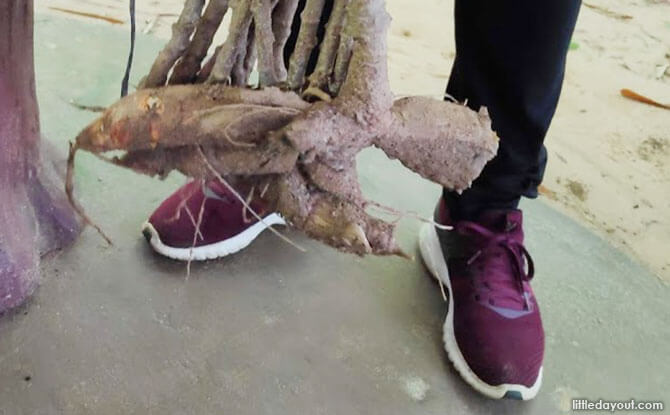 Since wartime cooking was limited to steaming, the Vietcong planted a lot of tapioca to feed the soldiers and villages. The tapioca was steamed in the early morning or late afternoon so that the steam generated would remain undetected during those misty hours.

We even got to try some tapioca with a salt-sugar-peanut dip.

Eating it once was a novelty but eating it only one portion daily was the typical sustenance for wartime. It was an opportunity to teach the children not to take their daily meals (and peacetime) for granted. 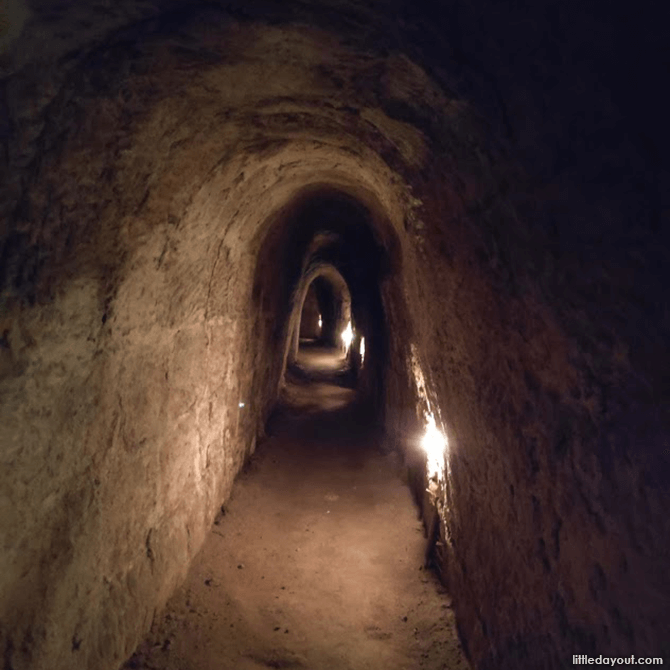 After walking around in the shade of the trees trying to spot the “termite mounds” as well as bomb craters which dotted the surroundings, we got a chance to try out what moving underground felt like.

There were three tunnel distances we could experience and the children were thrilled to be heading into the “hobbit holes”. Most of the time, we had to bend over to move along the tunnels for the first level which was two metres underground.

While ventilation and light were sufficient for tourists, there was hardly such luxuries for the soldiers then.

Tiny tunnels led us to large rooms with various purposes – for wartime strategising, first aid and rest-spots for the weary. 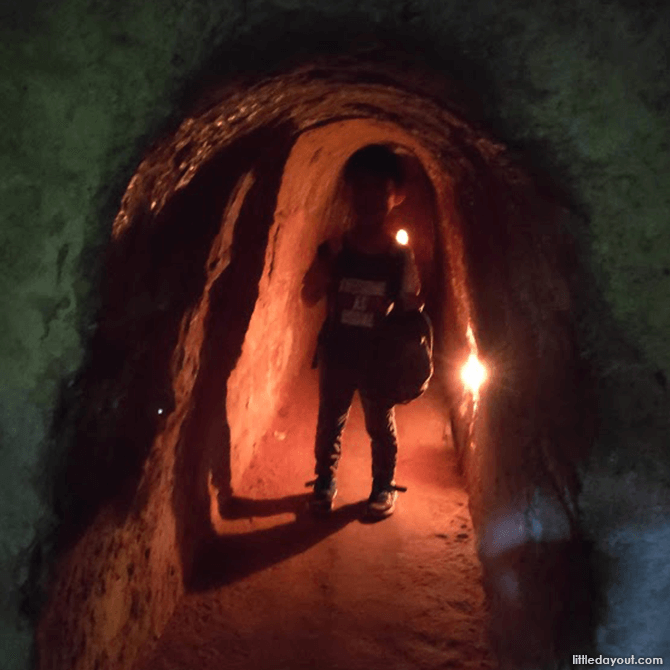 These spaces must have been carved out with much sweat and blood. While the hobbit sized tunnels were an easy walk for our tiny five-year-old, many of the tunnels in reality were much smaller especially as we went deeper underground.

The Vietcong had to move on their tummies navigating the tight spaces, while trying to avoid lethal bites from snakes and other creatures. After we “conquered” the 45-metre tunnel which we had to waddle through like a duck, we were sweating in buckets after a mere five-minute workout. Hours or days underground would have been suffocating.

One classic must-do at the Cu Chi Tunnels was finding the actual entrance to the tunnels. We were led to this mound which looked like any spot in the forest when a small squarish opening was uncovered. 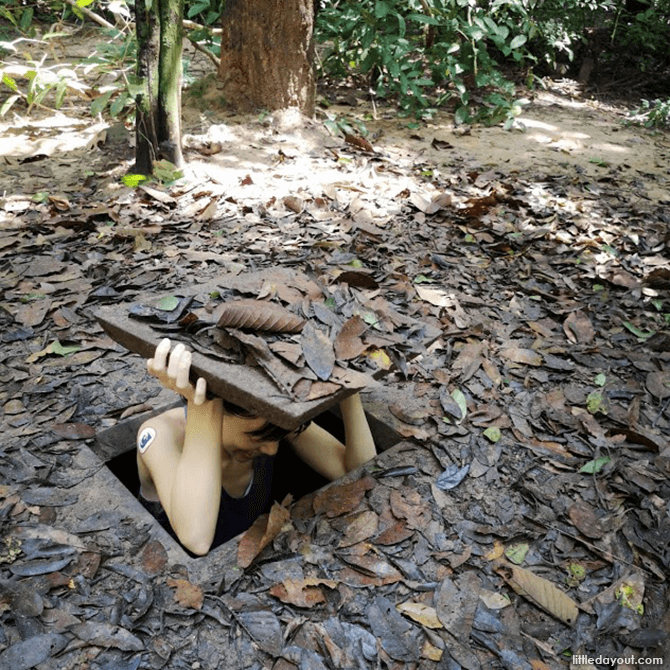 Stealthily climbing into the opening and then closing it was something the Vietcong had to do nimbly. The size of the opening was definitely “Asian-sized”, any bigger person would have been stuck. If the American soldiers entered into a wrong hole or a trapdoor, they could even be instantly pierced by painful hooks underground.

For two years, American soldiers set up camp right above the Cu Chi Tunnels. Unknown to them, they wondered how the Viet Cong soldiers could shoot at their tents and disappeared so quickly after.

Apparently, the American soldiers sent their dogs to sniff out the tunnels as they feared the lurking dangers after many failed to penetrate the tunnels. So many dogs got maimed and killed by hidden danger that the operation was abandoned. Nearing the end of the war, the Americans carpet-bombed the entire “Iron Triangle” where the tunnels were in an attempt to destroy what they couldn’t conquer. 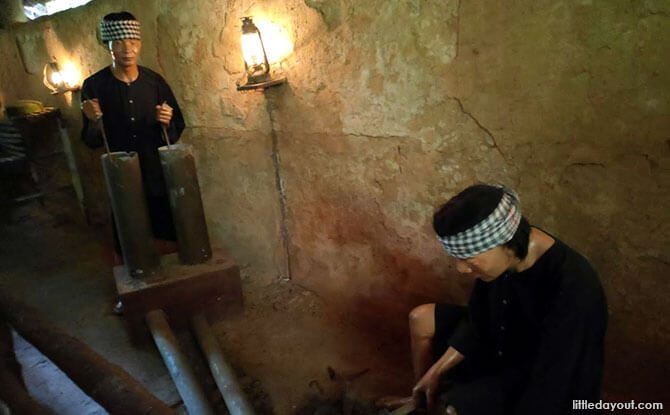 The Cu Chi Tunnels tour took up a good portion of our day in Ho Chi Minh City, but it was an experience we wouldn’t have miss for the world. It was the reminder of war that paid price of peace. Through that, we hope our children would be able to understand the ravages of war and the struggles of humanity.

After a long morning, we were happy to head back to Ho Chi Minh City for some simmering pho broth to comfort our rumbling tummies and aching backs.