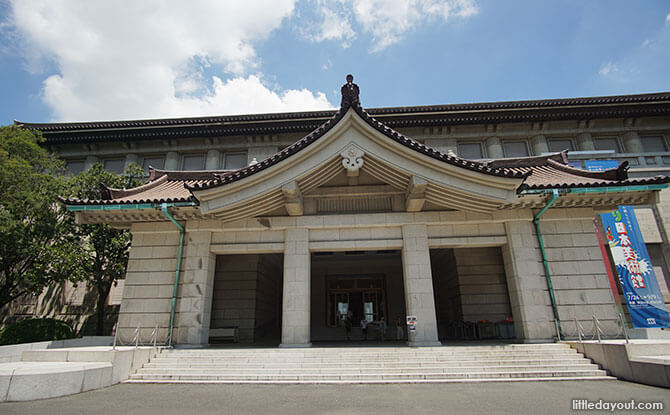 Established in 1872, the Tokyo National Museum is not only the oldest museum in Japan, but one of the largest as well. It is an art and cultural museum at Ueno Park, filled with objects from Japan and the world.

The Tokyo National Museum displays around 3,000 to 4,000 artefacts at any one time. These are drawn from its collection of over 110,000 objects. These include 87 pieces which have designated as National Treasures. Items are rotated so there is always something new to see at the museum.

Overview of the Tokyo National Museum

The Museum is spread over multiple buildings, each of which would otherwise be considered a museum in itself.

Honkan is Tokyo National Museum’s main building. This is the Museum’s Japanese Gallery and focuses on Japanese art and history.

In the Honkan are exhibits of Japanese objects and iconic figures such as the samurai.

The Honkan is connected to another building, the Heiseikan. Inside the Heiseikan is the Japanese Archaeology Gallery on the first floor. This gallery provides a look even further back in time with displays such as clay figurines and bronze bells. The Heiseikan also houses a thematic exhibition area.

The Toyokan or Asian Gallery looks beyond Japan with exhibits from China, India and the rest of Asia. It includes archaeological artefacts from countries such as Egypt too.

Another building at the Tokyo National Museum is The Gallery of Horyu-ji Treasures with more than 300 Buddhist artefacts donated by the Horyuji Temple in Nara.

The Hyokeikan building is used to host special exhibitions and the Kuroda Memorial Hall is built by the bequest of Kuroda Seiki, one of Japan’s most renowned painters of the modern era. It is used to showcase his work.

These last three buildings may or may not be open to the public.

The Honkan is the face of the Tokyo National Museum. The building opened in 1938 and has 24 galleries spread over two floors.

Start your visit on the second floor to trace the development of Japanese arts from Jomon to the Edo period. 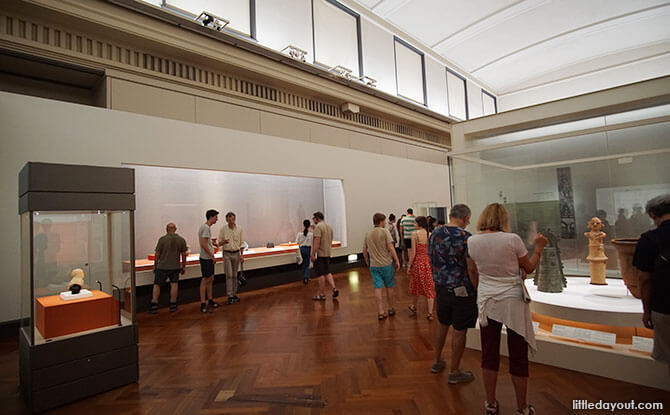 The journey starts off with the Dawn of Japanese Art before moving on to The Rise of Buddhism in the mid-6th Century where you can view Buddhist artefacts, representative of the arrival of the religion to Japan. 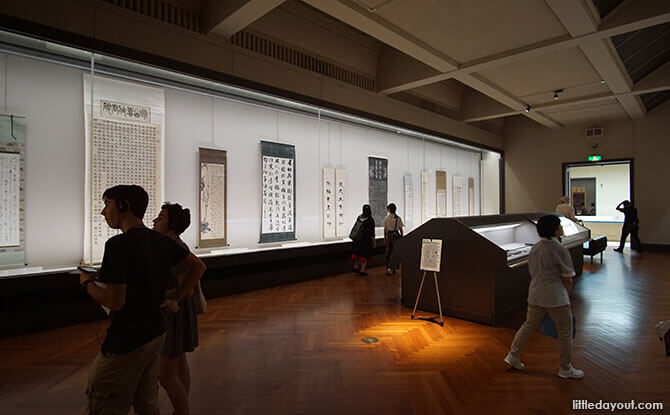 Zen and Ink Paintings captures the Kamakura-Muromachi period with landscape paintings from the era. The Art of Tea Ceremony room highlights artefacts associated with tea. 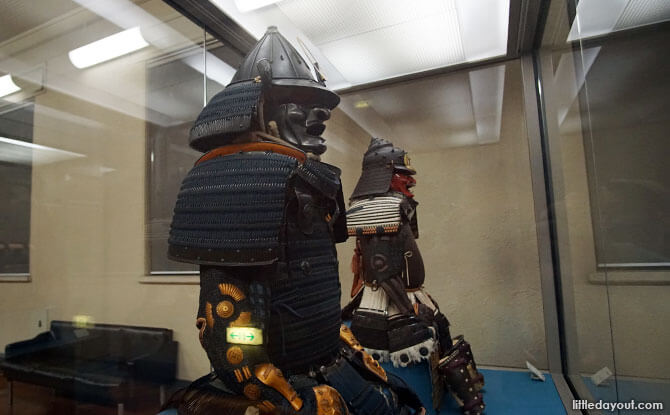 Attire of the Military Elite focuses on the arms and armour of the samurai from the Heian-Edo period.

This is the start of a series of rooms which focus on the Edo period, including a look at the various dress and developments in painting. 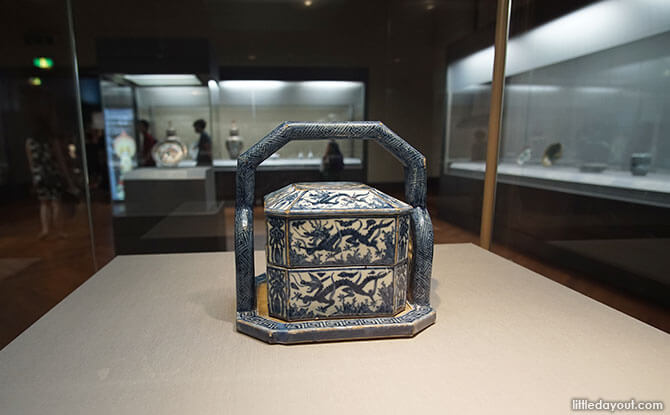 On the first floor, there are sculptures from the Heian and Kamakura periods, lacquerware and displays of metalwork. One room displays Japanese swords.

A room at the Honkan also focuses on the Meiji to Taisho period. 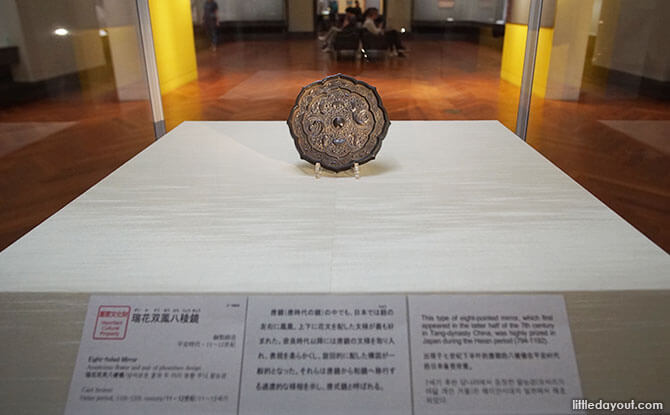 One tip is to look for exhibits marked as Important Cultural Treasures (look out for a red chop). These will typically provide a gist of what is on display at a particular room. 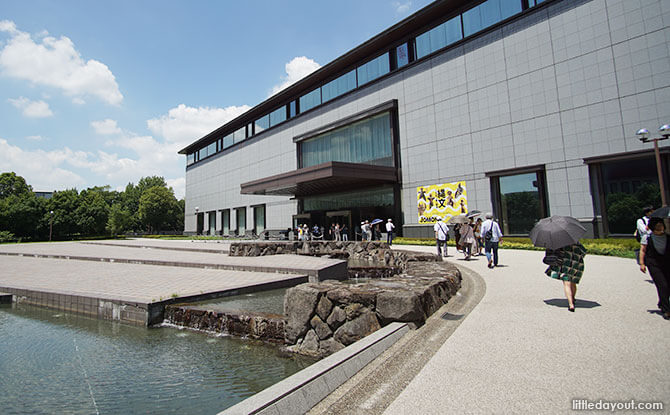 It houses special exhibitions on the second floor and has galleries on the first floor which showcase archaeological finds from Japan’s even more distant past. 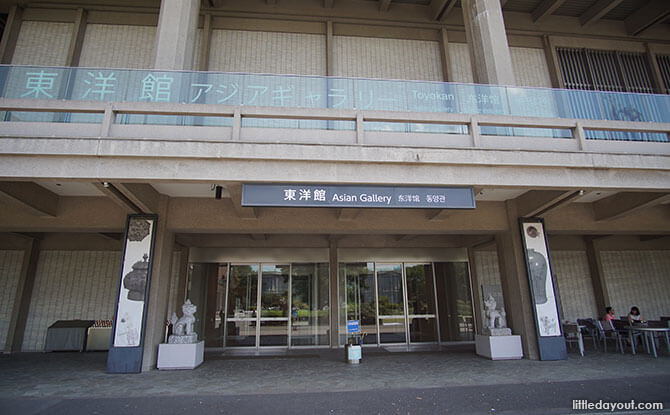 With 5 floors and a basement level, the Toyokan covers wide area of China, India, Southeast Asia and the Middle East. 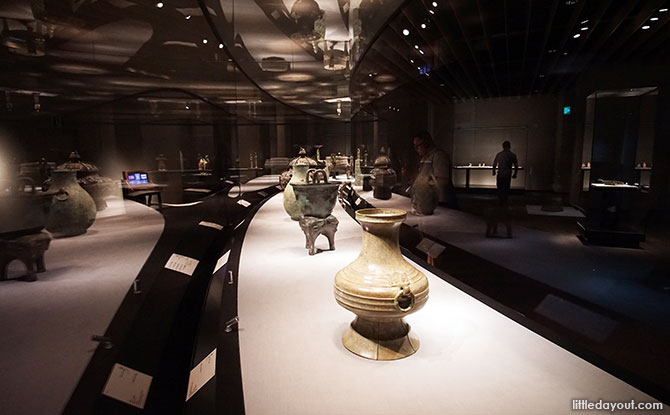 The first floor features Chinese Buddhist sculptures while works of art from India, Central and West Asia can be found on the second floor. The third floor digs deeper into Chinese civilisations with a look at burial practices, textiles and ceramics. The fourth and fifth floors contains paintings and calligraphic works.

The basement galleries focus on Southeast Asian countries such as Indonesia and Cambodia.

The Gallery of Horyuji Treasures

This Tokyo National Museum building features valuable Buddhist objects donated to the Imperial Household by the Horyuji Temple in 1878. These date back to the 7th and 8th century and include banners, statues, calligraphy, metalwork and lacquerware.

Named after Western-style painter Kuroda Seiki (1866 – 1924), the building hosts exhibitions of his paintings, sketches and other art works.

Built in the late Meiji period in honour of the Taisho crown prince’s wedding, the building has been designated an Important Cultural Property. It is used to house special exhibitions and may or may not be open to the public.

Much to See at Tokyo National Museum

The Tokyo National Museum offers much to see and take in. Through its collection, it provides a good introduction for those who are interested in Japan’s history.