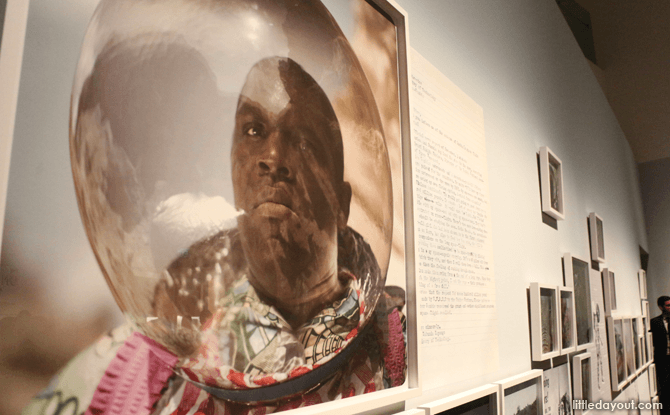 Since time immemorial, mankind has pondered the mysteries of the Universe. ArtScience Museum’s latest exhibition, The Universe and Art, explores this universal fascination and offers a new perspective to the question “what is really up there”.

Combining religious and historic artefacts, scientific works and contemporary art, it provides an esoteric insight into the multiple facets of humanity’s contemplations about the universe.

Our Vision of the Universe 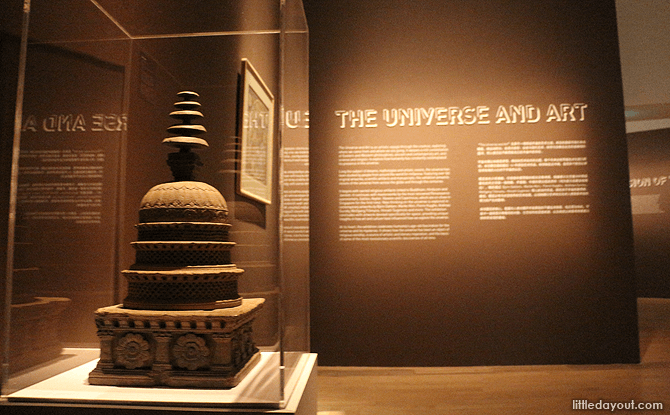 The first of the four exhibition sections starts off with a look at ancient conceptions of the Universe, 16 artefacts on loan from Asian Civilisations Museum provide a glimpse into Buddhist, Hindu and Jain views of the Universe. 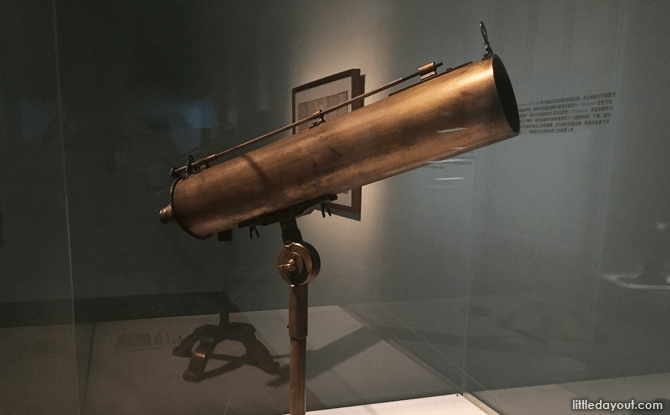 In the same section, these traditional views are juxtaposed against scientific efforts to expose the secrets of the universe through fields such as astronomy. 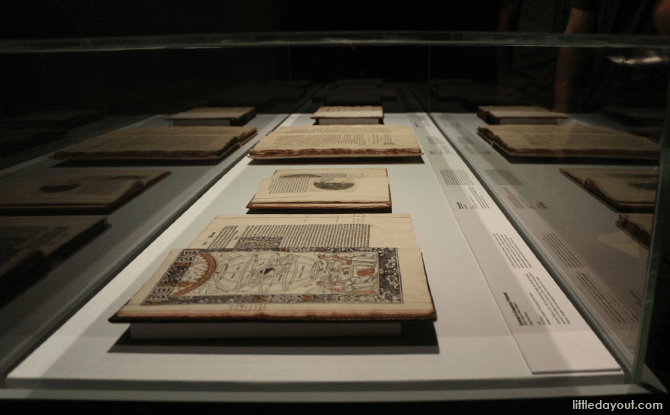 Of particular significance is collection of four 1st edition books from the Renaissance period. These are master works by Copernicus, Galileo and Isaac Newton (his Principia Mathematica of the laws of motion fame!). These books captured the thoughts that led to the Ptolemic view that Earth as the centre of the Universe being overturned.

The Universe as Space-Time 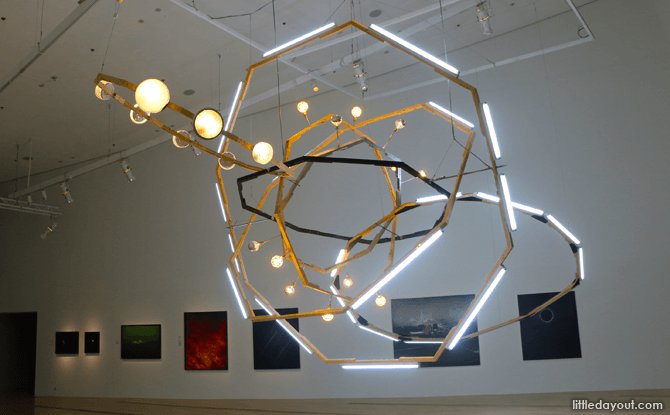 The next section explores space from the point of view of contemporary artists. Among the works on display are those by three leading photographers, Andreas Gursky, Trevor Paglen and Wolfgang Tillmans. 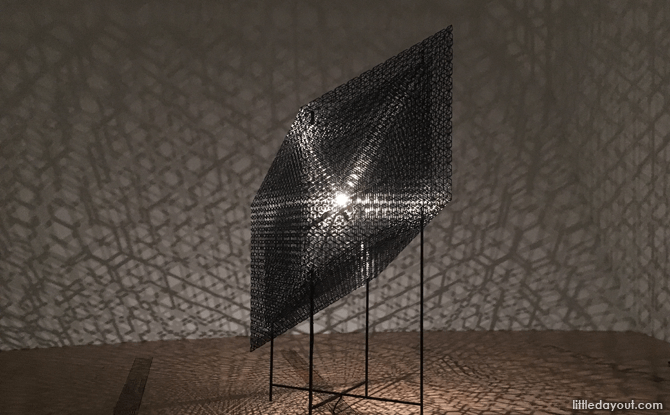 There is a room is dedicated to a science-inspired artwork by Conrad Shawcross commissioned for the exhibition, Slow Arc inside a Cube VIII. This takes inspiration from cosmological phenomena such as dark matter.

Just as dark matter cannot be visibly observed but only be studied by observing its influence on other objects, the moving shadows on the walls created by the kinetic sculpture at the centre of the room provides a way to understand the sculpture without looking at it.

A New View of Life 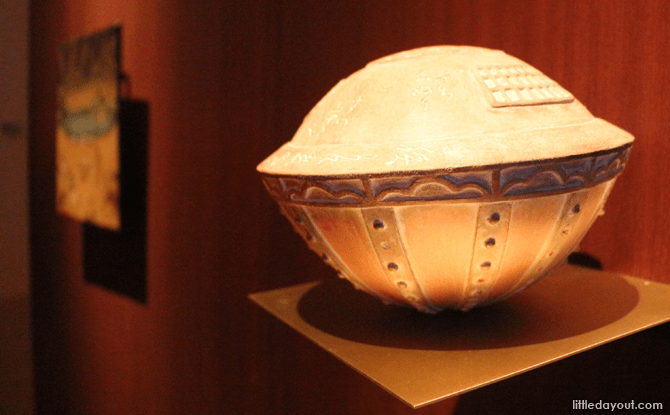 The artistic discourse continues with an exploration into extraterrestrial life. This is presented through sculpture and visual art, and includes a pop culture element.

The theme of Space Art rounds off The Universe and Art exhibition with a playful jaunt into art specially designed for space and musings about space. 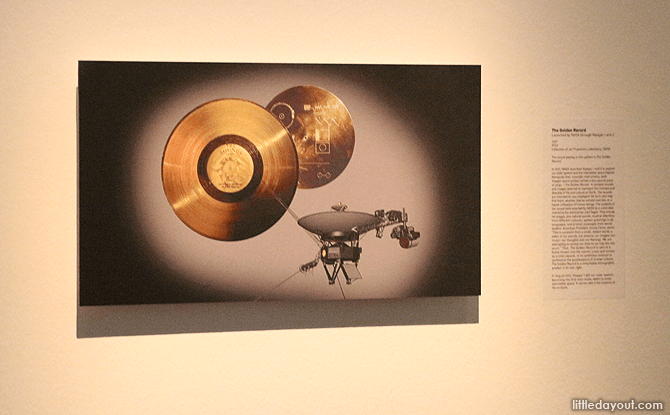 Playing over the speakers in the gallery are the sounds of the Golden Record, a 12-inch gold-plated disk that was sent out into space on the Voyager spacecraft carrying sounds, music and greetings from Earth. 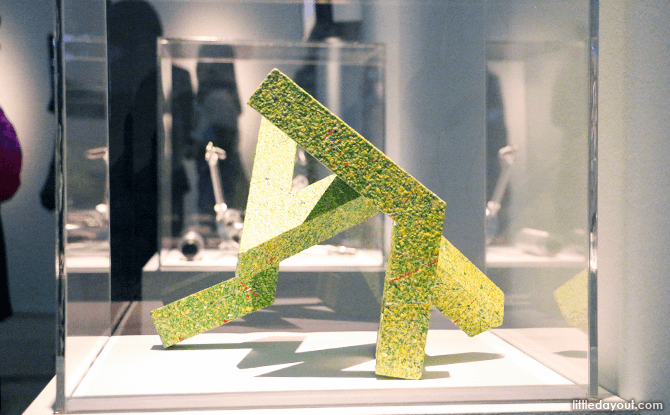 There are “post-gravity” artworks on display. These are art pieces that were taken up into space and, because of a lack of gravity, intended to be viewed from multiple angles. 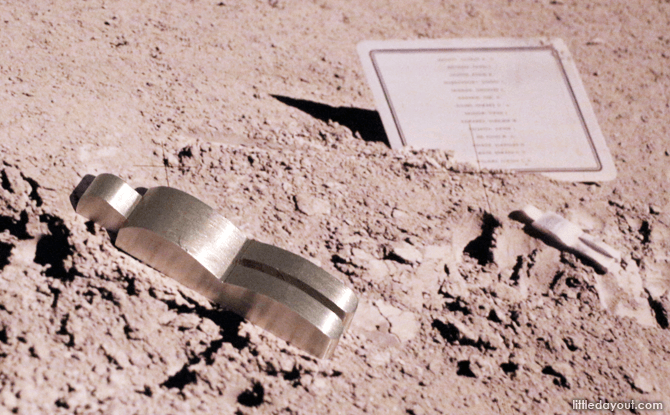 A replica of Fallen Astronaut, an 8.5 cm aluminum sculpture that was placed on the moon in 1971, can also be viewed.

The Universe and Art provides a unique look at the cosmos from an artistic perspective.

Honor Harger, Executive Director, ArtScience Museum at Marina Bay Sands explained, “Humanity has always looked to art, mythology and philosophy in an attempt to fathom the Universe and its mysteries. The Universe and Art shows how these fields, when combined with the understanding generated by science, give us new insights into the cosmos.”

The exhibition is jointly curated by ArtScience Museum and Toyko’s Mori Art Museum, in association with Asian Civilisations Museum.

The Universe and Art Exhibition at ArtScience Museum