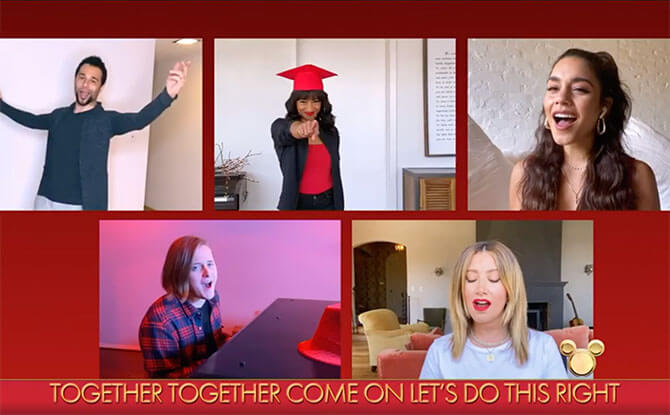 This reunion took place with other huge artist names at The Disney Family Singalong and was aired in the U.S. on 16 April 2020.

The High School Musical cast came together remotely and did a singalong and dance to the well-loved song “We’re All In This Together”. As we are going through COVID-19, it is yet another timely reminder that we aren’t alone.

Notably, Zac Efron who plays Troy Bolton did not sing in this musical number but made the introduction in the video.

Although we questioned why 16-year-old TikTok star Charli D’Amelio made a cameo appearance despite not being a “Disney” actor, the energy and positivity radiating from the video got us grooving from the first minute.

The Disney Family Singalong was hosted by Ryan Seacrest and also featured a range of stars from the Disney universe, singing covers of other well-loved Disney songs such as “A Dream Is A Wish Your Heart Makes” by Demi Lovato and Michael Bublé, “Colors of the Wind” by Tori Kelly, and “You’ve Got a Friend In Me” which is sung by Josh Groban.

Although the premiere was not extended to fans in Singapore, we can still watch it on the playlist on ABC’s YouTube channel here.

We hope the full list of songs will be uploaded soon!