Home Play The Little Prince: Behind the Story At Singapore Philatelic Museum 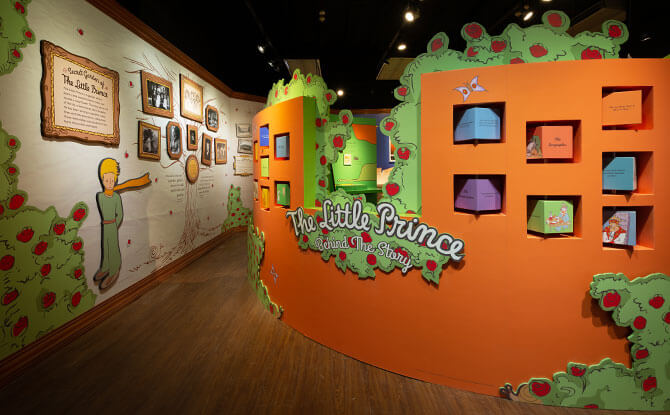 The book was first published in April 1943 and has since gone on to sell almost 200 million copies.

The Little Prince & Life of Saint-Exupéry

At one level, The Little Prince is a children’s imaginary tale about a stranded aviator who encounters the Little Prince who is from another planet. At another level, the story is a deeply philosophical one and provides a critique of society and human relationships.

Saint-Exupéry was himself a multi-faceted person. He was a French aristocrat, laureate and poet. Born just four years before the Wright Brothers took mankind to the skies, he was also an early aviator.

In the 1920s, he was one of the pioneers of international postal flight and was based in North Africa before relocating to Argentina as director of Aeroposta Argentina, a subsidiary of French airmail company Aéropostale.


Release your creative energy with these art supplies!

In 1935, Saint-Exupéry and his mechanic-navigator crashed into the Libyan desert while on an air race from Paris to Saigon. An incident that bears striking similarity to the opening scenes of The Little Prince.

On 31 July 1944, as a member of the Free French Air Force, he took off on a reconnaissance flight to spy on German troop movements but never returned and was presumed dead.

It was only more recently in 1998 and 2000 when some artefacts, such as a silver identify bracelet and fragments of an WWII plane matching the one he went down in, were discovered.

The Little Prince: Behind the Story exhibition at Singapore Philatelic Museum provides an intimate look into Antoine de Saint-Exupéry life through artefacts and his personal items.

A star exhibit at The Little Prince: Behind the Story is his silver identity bracelet that was recovered from the sea in 1998.

Also on display are his military coat, pilot gloves and a copy of the first edition of “The Little Prince”.

A fragment of his plane that crashed in the North African desert is also on loan from the Mehun-sur-Yèvre Museum.

Visitors to Singapore Philatelic Museum’s The Little Prince: Behind the Story can also admire around 200 stamps and other philatelic items issued by 27 countries in tribute to Antoine de Saint-Exupéry and the story of The Little Prince.

The Little Prince: Behind the Story exhibition is supported by the Singapore-France Cooperation Agreement and celebrates the 75th anniversary of the story. It will run till 17 March 2019.

The Little Prince: Behind the Story at Singapore Philatelic Museum

READ: Things to do at Home over the Hari Raya Puasa Long Weekend

READ: Brain Puzzles and Games for Families To Keep The Mind Active

Discover the World of Play-Based Learning | Thu 28 May

Activities & Things To Do During May School Holidays 2020 In...

ABOUT US
Little Day Out is a Singapore-based online magazine with exciting ideas and on-the-ground stories on the best of Singapore and the region for families. It is the perfect go-to guide, helping families create memories that last a lifetime.
Contact us: hello@littledayout.com
FOLLOW US
© Copyright 2020 - Big Little Company Pte. Ltd.
MORE STORIES
Learn

Father Dishes Out Everyday Advice Through “Dad, How Do I” YouTube...

5 Tips For Starting Meaningful Conversations With Kids In Your Home