Home Play The Artground’s 100 and 100 More Festival for Young Audiences: Creativity and... 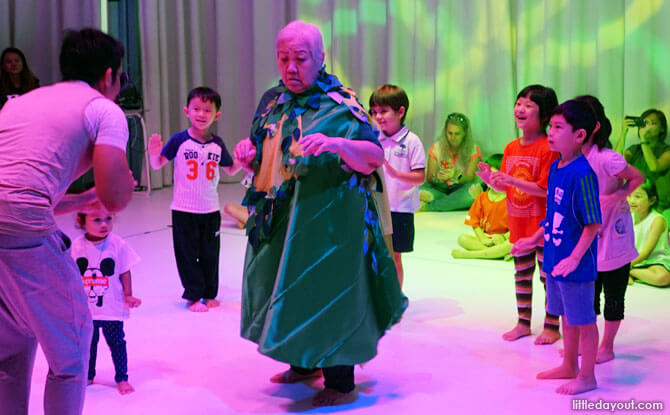 Since opening in July 2017, The Artground at Goodman Arts Centre has welcomed more than  31,000 curious and creative visitors through its doors. In May 2018, the centre will add another feather to its cap with its inaugural 100 and 100 More Festival for Young Audiences.

Inspired by the Loris Malaguzzi poem “The Hundred Languages of Children”, The Artground’s 100 and 100 More Festival for Young Audiences is a children’s arts festival that seeks to do more than entertain. In addition to showcasing delightful performances for children, it also serves as a creative space for artists to expand their artistry and develop new works for young audiences.

Explaining, Luanne Poh, Director of The Artground says, “The vision for the festival is to be the platform where original, developmentally appropriate content by local and regional artists are showcased and presented. These include works-in-progress developed through The Artground’s local artist incubation platform, GroundBreakers, as well as our regional and international partnerships.”

Into the Blue Forest – Explorations in Theatre-making 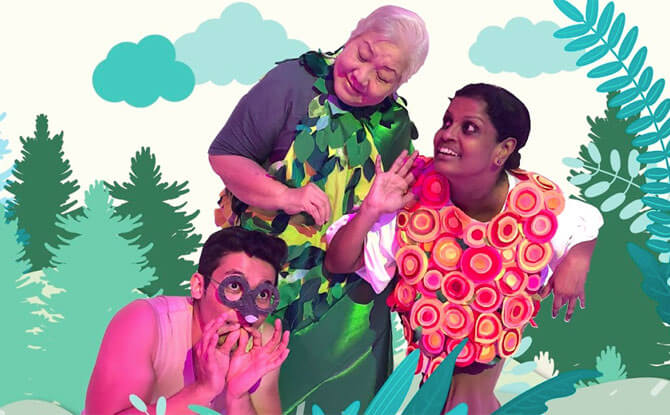 This ethos is manifested in the 100 and 100 More Festival’s first commission, Into the Blue Forest by Jeffrey Tan.

Into the Blue Forest (25 to 27 May) is a theatrical performance inspired by the children’s picture book The Blue Forest. The book is written by Jeffrey, a noted Singaporean theatre director, and Italian artist Dario Moretti. It features 10 playful drawings by Moretti, beautifully interwoven into a fantastical story of hope and dreams by Tan.

For the 100 and 100 More Festival, Jeffrey has adapted the book into an immersive performance for children between four and seven years old. 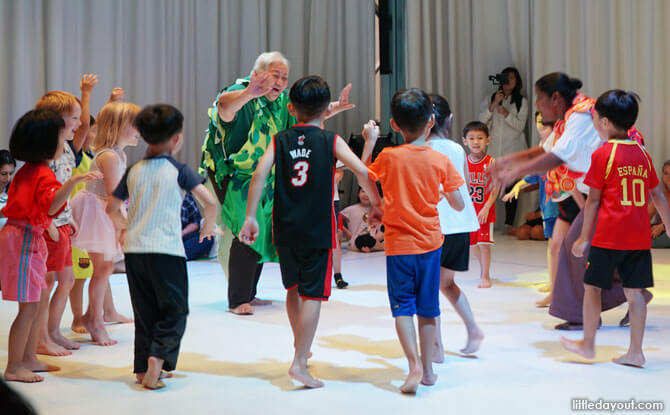 Into the Blue Forest casts audience members as an integral part of the show. Little ones are seated around the actors and given roles to play during the 45-minute performance. This makes The Blue Forest an engaging performance that draws the young audience into the action.

The creation of such an immersive experience for children was only possible because of the development process behind the performance. Over the last year, Jeffrey and his team have been regulars at The Artground. They were there on a mission – a mission to seek out children’s inputs to devise Into the Blue Forest.

In contrast to the typical theatre development process which draws mainly on the experience of the producer and scriptwriter, Into the Blue Forest was shaped by the audience-to-be themselves – the children visiting The Artground.

By constantly incorporating the inputs of children into the development of Into the Blue Forest, Jeffrey and team were able to iteratively fine-tune the use of different dramatic elements, for example music, lighting, and costumes, for the show. This theatre-making approach melds together research and creative development into a single process. Although it required a longer period of time to arrive at the final work, the team behind Into the Blue Forest clearly believes it was worth it.

“We wish to empower children who come to see Into the Blue Forest to believe that their voices are heard, and that they are all special in their own ways,” says Jeffrey.

The result is an intergenerational performance about friendship that charms with its relatable storyline and balance of suspense, excitement and interaction. 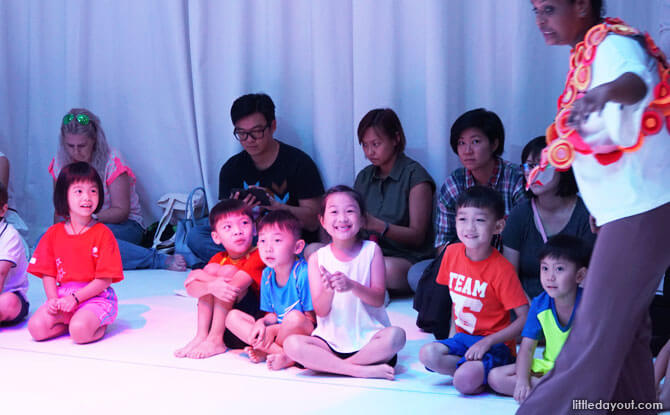 And, judging by the smiles on children’s faces at a preview of Into the Blue Forest, Jeffrey and team have achieved what they set out to accomplish.

Especially on Birthdays – An International Partnership

Another collaborative work at The Artground’s 100 and 100 More Festival for Young Children is Especially on Birthdays (1 to 3 June).

This children’s theatrical performance first premiered at the recent Commonwealth Games in April 2018. Its narrative tells of what it is like to be a twin – being the same but different at the same time. Each person has individual likes and dislikes but finds joy in the experience of going through it all together, especially birthdays. 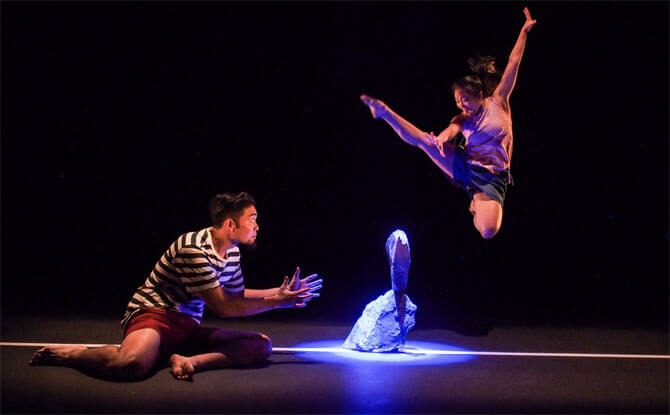 At 100 and 100 More Festival, audiences will be treated to a localised version of Especially on Birthdays, the result of a collaboration between The Artground and Australia’s The PaperBoats.

The project was led by The PaperBoats’ Dave Brown, formerly the artistic director of internationally acclaimed South Australian theatre group Patch for more than 20 years. Brown worked closely with creative producers from Singapore to realise Especially on Birthdays for the 100 and 100 More Festival.

Especially on Birthdays created the opportunity for Singaporean and Australian theatre practitioners to exchange ideas and share best practices relating to works for early childhood audiences. Brown himself describes the collaborative approach as, “the chance to make something extra-ordinary, enhanced by the power of networked creativity.”

Both In the Blue Forest and Especially on Birthdays epitomise The Artground’s vision for the 100 and 100 More Festival to serve as a platform for new works to be developed and presented to young audiences. With such a platform in place, it is The Artground’s ambition to foster and inspire more local artists to create original works for children and catalyse greater collaboration between local and international artists.

The vision is also supported by The Artground’s local artist incubation programme, GroundBreakers. The programme invites artists to design and devise works to be showcased at The Artground.

“We hope to encourage the sharing of knowledge and best practices, so as to develop a dynamic and diverse landscape of artistic practices for our community in this sector,” says The Artground’s Luanne. “We trust that this will help professionalise and create sustainability for local artists who wish to focus on and develop works for young audiences.”

Treat for The Young Audiences

Indeed, there will be plenty of works for young audiences to enjoy at the 100 and 100 More Festival. Close to 70 programmes, ticketed and non-ticketed, will be presented at the Festival. 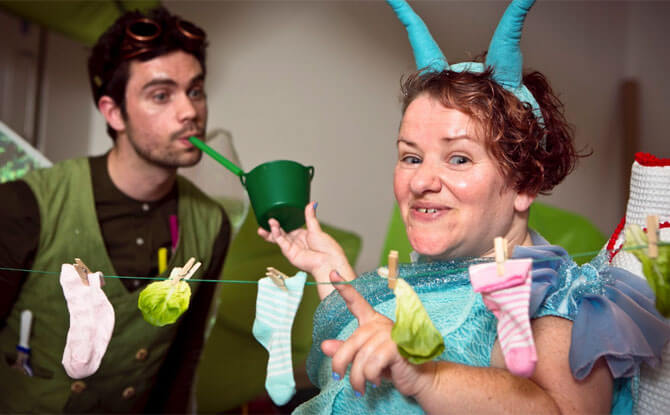 Other artists at the Festival include Caroline Bowditch, a leading disabled dance artist from the UK who will stage a performance for 0 to 12 months pre-walking babies (1 to 3 June) and Teater Refleksion and Teater My from Denmark with Songs from Above for two to four year olds (28 to 30 May). Papermoon Puppet Theatre from Indonesia will be presenting PUNO – Letters to the Sky (29 to 30 May) and Teatret Gruppe 38 from Denmark will stage a theatrical imagery experience Hans Christian, You Must Be an Angel (25 to 27 May). 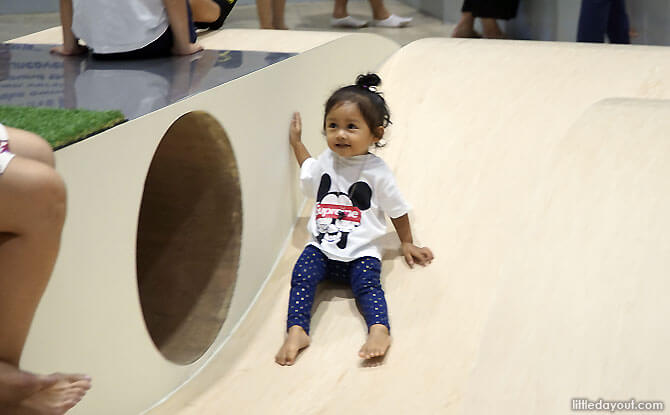 100 and 100 More Festival’s theatrical performances are complemented by a new interactive play installation, ROLLING @ TAG, by Japanese artist Daiya Aida. There will also be workshops for children to participate in.

The Artground’s 100 and 100 More Festival for Young Audiences takes place from 25 May to 3 June 2018. For a complete list of programmes, visit the festival website www.100and100more.com.

The Artground’s 100 and 100 More Festival for Young Audiences

Date: 25 May to 3 June 2018
Venue: The Artground, Goodman Arts Centre
Tickets are available from the Festival website here.

This feature is brought to you by The Artground.