There’s so much to see and discover in one of Singapore’s oldest heartland towns, Hougang! Take a self-guided tour along any of the three thematic trail routes of varying distances presented by the team from the National Heritage Board. There are lots of interesting things that one can discover when they walk along the new Hougang Heritage Trails.

Pronounced “Au Kang”, this translates to “at the back of the river” in both Teochew and Hokkien and is a reference to Sungei Serangoon at the end of Upper Serangoon Road, around which many Teochew-speaking inhabitants settled. The first documented use of this dialect name was from way back in 1856. 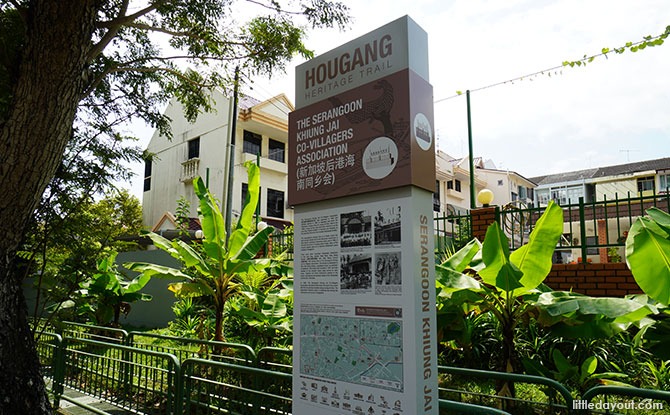 From tales of crocodile and pirate attacks, the new Hougang Heritage Trail, consisting of 18 heritage sites with 10 trail markers. The three trails are “Landmarks of Hougang, Institutions of Service and Architectural Gems.” On the way, explorers will see historical landmarks, important community institutions, as well as signs with the personal memories and contributions from the community. The new Hougang Heritage Trails will feature two National Monuments – the Church of the Nativity of the Blessed Virgin Mary and the Hougang Tou Mu Kung – making it the first heartland trail to do so.

A neighbourhood of diverse faiths and communities 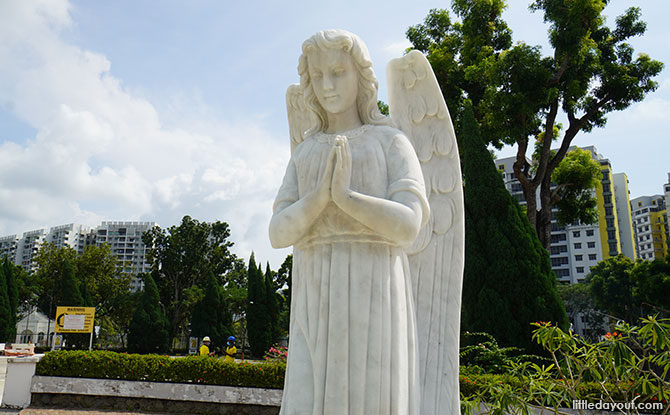 The neighbourhood of Hougang is one of diverse faiths and communities and this is evident in the key religious institutes that are highlighted on the heartland trail.

Located at the end of Au Kang, the Church of the Nativity of the Blessed Virgin Mary is the oldest place of worship in the area and was established by a Roman Catholic missionary who served the growing Teochew catholic population in the past. In 2005, this church was gazetted as a National Monument.

As for the Hougang Tou Mu Kung, it is the oldest temple in Singapore that is dedicated to the Nine Emperor Gods. The Hougang Tou Mu Kung was first founded as a shrine at Lim Loh Village (at present-day Wolskel Road) before relocating to its current site in 1921. The temple was titled as a National Monument in 2005. 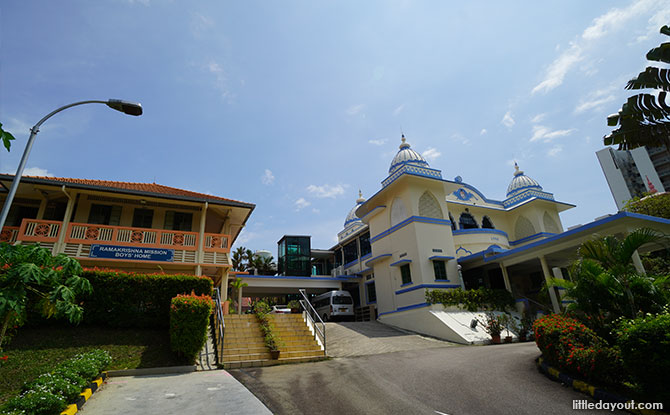 Other than the religious institutions, many of these institutions are also a key part of serving the community and offer important services such as medical care, education and social support. 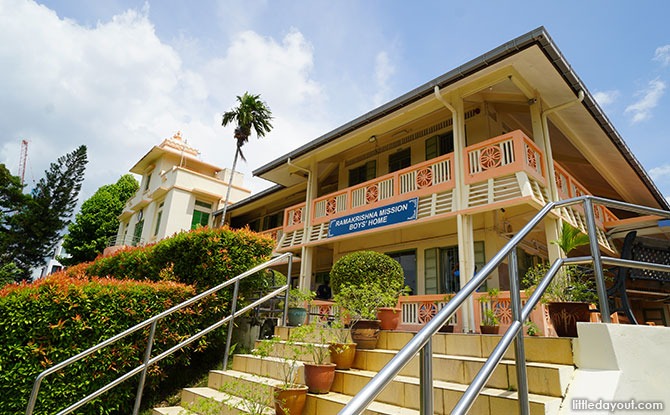 One such place is the Ramakrishna Mission along Bartley Road. The Ramakrishna Mission compound has a Boys’ Home, a temple and the Swami Centenary Memorial Cultural Building. The clear representation of the mission’s belief that all religions lead to the same goal of enlightenment can be seen in the temple’s design. The blue and cream building is modelled after the mission’s main temple in West Bengal and integrates architectural features and motifs from different religions, such as Buddhism and Islam. 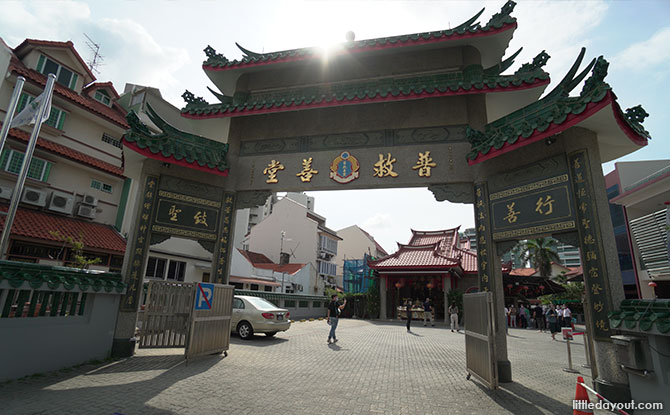 Another institution is the Phoh Kiu Siang T’ng. This organization is one of the three shantangs or charitable halls in Hougang, with these traditional charity organisations being strongly affiliated with the Teochew community. Established in 1929 at Upper Circular Road, Phoh Kiu Siang T’ng started by providing funeral services for its members and dispensing medicine to the poor. Today, the shantang operates a free clinic.

A Neighbourhood of many firsts 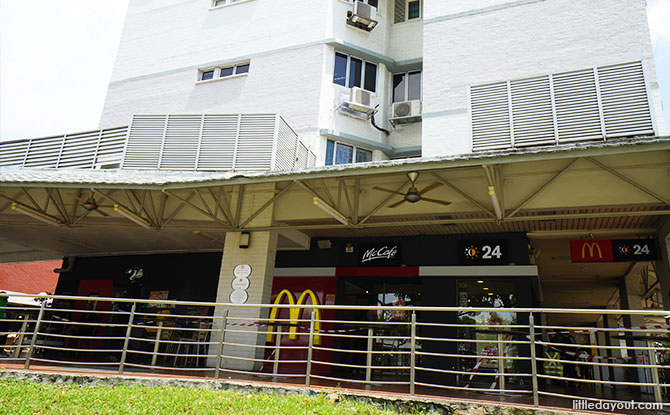 As one goes along the trail, there are lots of interesting nuggets of information to pick up, some of which might be new information even to residents of the area itself. Hougang is a fascinating area to tour and is the heartland of many firsts. There you will find Singapore’s first bowling centre, all entertainment complex and even the first fast food restaurant (Mac Donalds)! You can still find the buildings, such as the MacDonalds standing today. 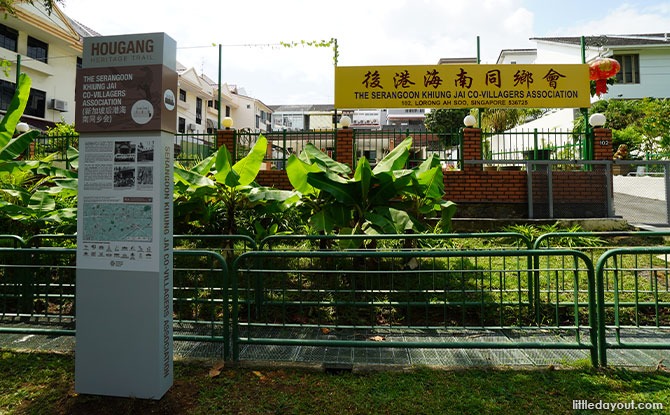 Mr Alvin Tan, Deputy Chief Executive (Policy & Community), National Heritage Board (NHB) said: “Through our new Hougang Heritage Trail and our other trails, we hope to encourage Singaporeans to explore their own backyards during this period of travel restrictions and rediscover local heritage delights. In doing so, we hope that Singaporeans will come away with a renewed appreciation of what Singapore has to offer in terms of unique heritage experiences with a strong local appeal.”

Where to download the Hougang Heritage Trail’s companion guide 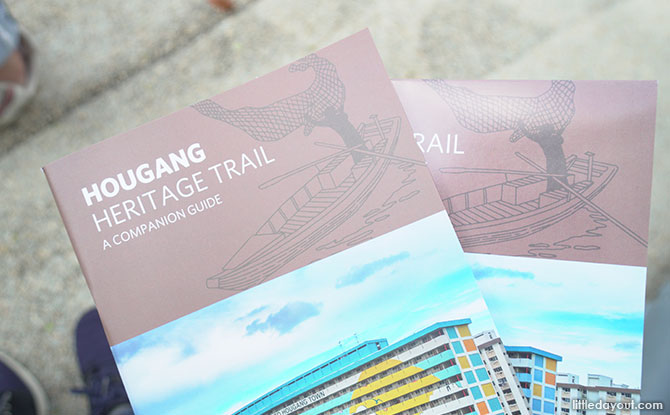 The Hougang Heritage Trail’s companion guide and map are available in four languages, and can be downloaded from NHB’s heritage portal, Roots.sg.

You can visit the National Heritage Board’s website for more information and see other heritage trails such as the one at Sembawang here.