After almost a year of being closed, the revamped National Museum of Singapore’s permanent galleries open to the public on Saturday, 19 September 2015.

If you have ever been to the previous permanent galleries at the National Museum of Singapore, you would recall having to enter from the second floor and take a downward spiral while the refrain “Singapore, Singapore” thumped away in your head.

Wandering around the old galleries could be a pretty lonely affair. You either had to drift from one exhibit to the next with a set of headphone warming your ears, or be content to wander around clueless because none of the exhibits had labelled descriptions.

Thankfully, the new permanent galleries have adopted a different approach to telling the Singapore story.

Different in a positive way.

Information is back on the walls and provided in digestible, bite-sized portions. The galleries are theatrically designed, almost making you want to check if you have stepped on to a sound stage by accident. With subtle sound effects, judicious use of multimedia projections, and even olfactory cues, the new permanent galleries provide visitors with an immersive museum experience.

Comprising the Singapore History Gallery on level one, and five smaller galleries a floor above, the new permanent galleries collectively form a kaleidoscope that allows visitors to peer into Singapore’s past.

The entrance to the new Singapore History Gallery is now on the first floor of the museum and leads directly in. No more swirling about required.

Singapura transports visitors to the quasi-mythical time when Singapore was a fishing village. On display are artefacts of significance such as gold earrings and an amulet which suggest the presence of royalty in then-Temasek. 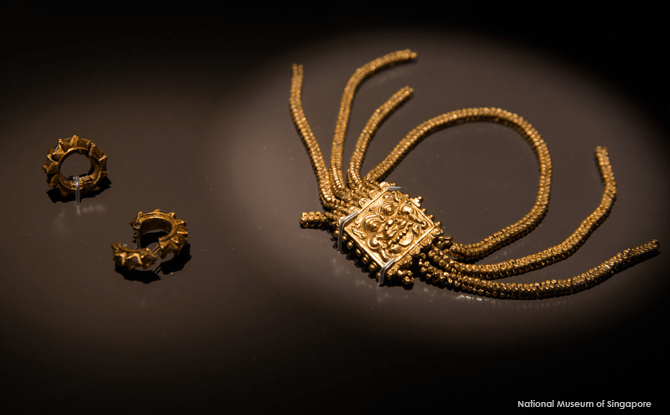 A portrait of Stamford Raffles greets visitors at the Crown Colony section. Here, visitors get a glimpse of life in colonial Singapore, with side-rooms that showcase its seedy underbelly such as secret societies and opium dens. Other hightlights to look out for include a 1819 handwritten letter by Raffles where he describes Singapore as “a child of my own” and the Revere Bell which used to be sound the curfew in Singapore. 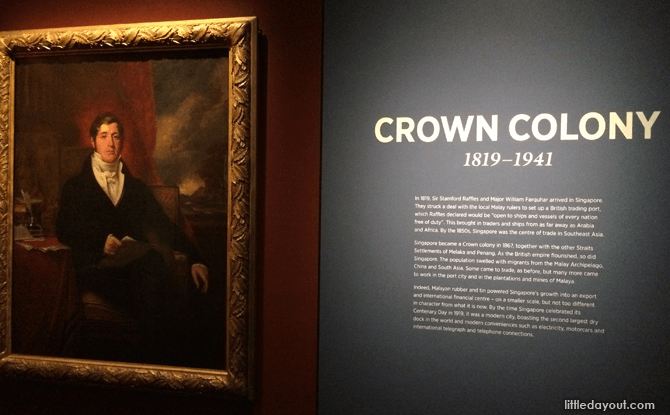 The clouds of war loom large in the next section, Syonan-To. The eye is sure to be drawn to a Type 95 Ha Go Japanese tank replica. The most common Japanese tank of World War Two, in the Battle of Singapore, the Type 95 reached Bukit Timah within days of the Japanese landing at Serembun. With a backdrop of Japanese soldiers on bicycles, the display provides an eerie sense of those ominous dark days in Singapore’s history. 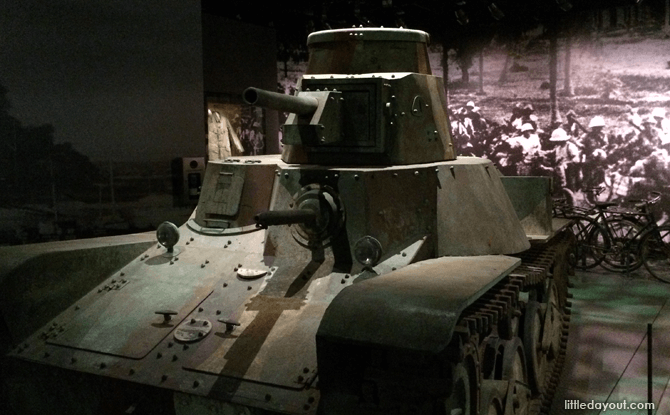 The tank replica is one of four constructed for Tom Hanks and Steven Spielberg’s television series, The Pacific.

On loan from the Australian War Memorial is an unremarkable looking teak table. However, the significance of the table is that the one on which the British penned their surrendered to Japanese at the Ford Factory along Upper Bukit Timah Road in 1942. Amazingly, after the war, the table continued to be used at the factory as a conference table until it was donated by Ford Malaysia to the Australian War Memorial in 1964.

The Singapore section delves into the county’s post-war years. It runs the gamut from the early days of political awakening to independence from Malaysia and a young nation tackling of economic and social challenges. Artefacts on display capture Singapore’s rapid transformation. Visitors can even get a whiff of what pre-clean-up Singapore River smelt like.

Be sure to stop at Object Theatre where multimedia and technology come together to tell Singapore’s history from the perspective of a photojournalist. 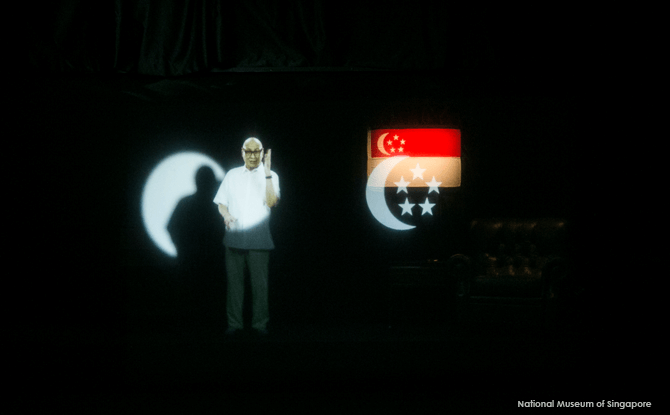 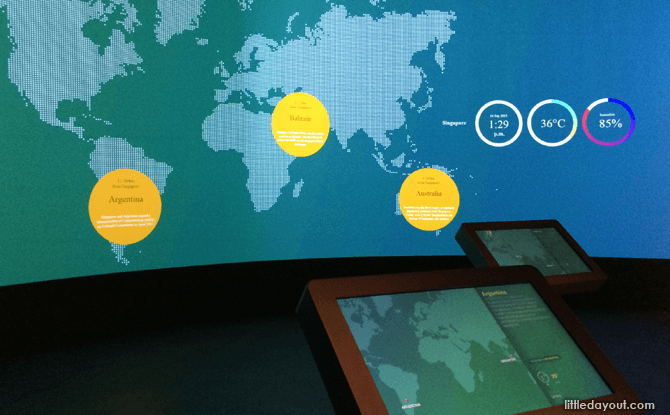 Life in Singapore: The Past 100 Years Galleries

The four smaller galleries on the second floor complement the Singapore History Gallery. Focused on the last 100 years, they cover life in Singapore from the 1920s to 1980s.

The Modern Colony gallery provides insight into life in Singapore during the roaring twenties and thirties. The setting is a 1920s black-and-white bungalow and visitors can savour cosmopolitan life in colonial Singapore. From the sounds and even smells of afternoon tea, to the changing fashion of women’s footwear, the gallery gives a sense of life under British rule in the 1900s.

Leaving behind colonial charms, Surviving Syonan plunges into life in under the Japanese regime. From learning to speak Japanese and finding means to earn a living, life under occupation is told from a personal level.

Here, stories of love and devotion hidden behind everyday objects. A sewing machine turns into an heirloom when husband rescues it for his wife from a looter, a wash basin serves as a reminder of the pleas of a Hakka woman for a young bride’s life. Go deeper into the personal story of Mr and Mrs Lai Kok Wah who met while seeking refuge from an air raid and fell in love during the Japanese occupation. 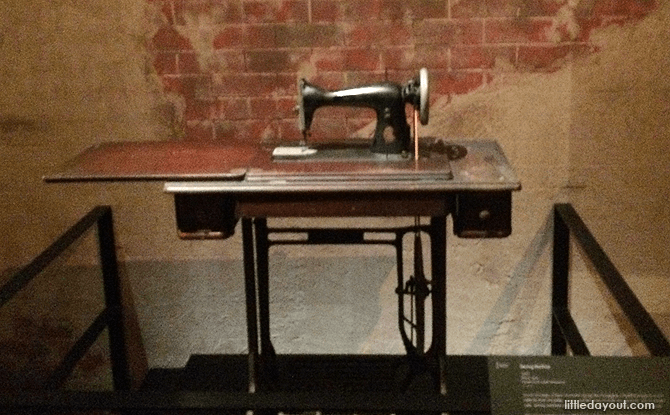 Growing Up and Voices of Singapore galleries explore the nation’s post-war years. The former gallery displays nostalgic artefacts from the 1950s and 1960s including a three-speed bicycle Mr Lee Hsien Loong received as an 11th birthday present from his paternal grandmother. 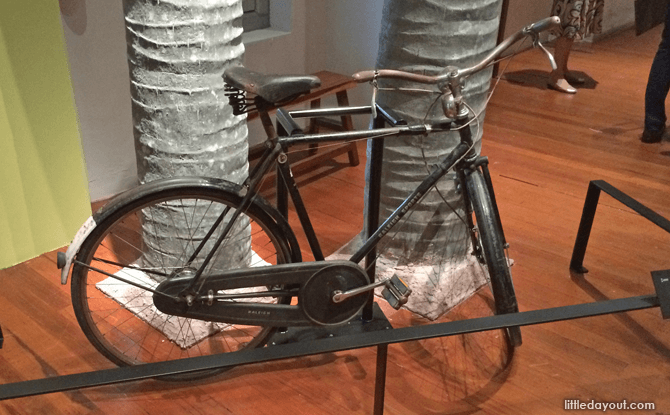 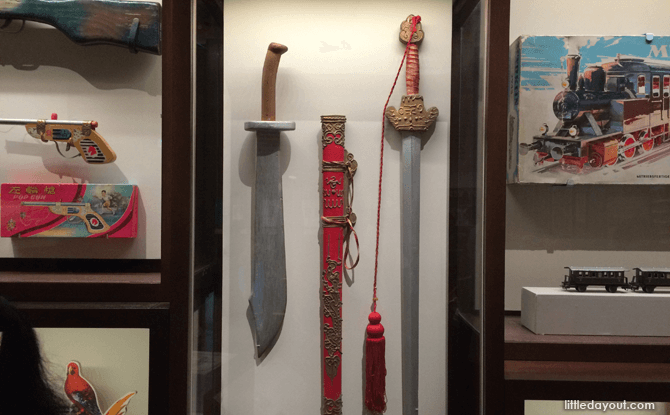 The highlight of Voices of Singapore is an homage to the old Jurong Drive-in Cinema. Sporty “cars” offer cushy seats for visitors to watch a movie filled with nostalgic scenes that those growing up in the 1970s would remember. 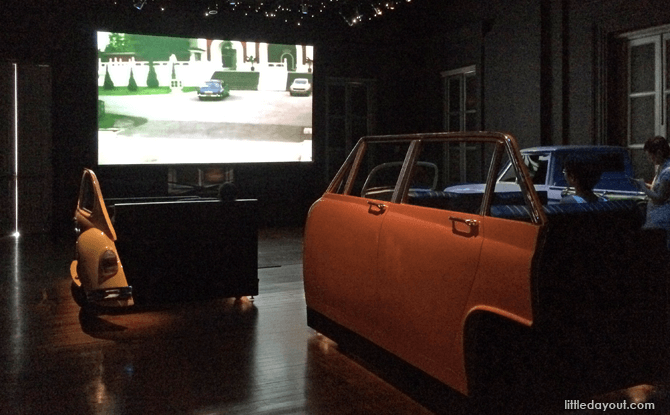 The National Museum of Singapore’s revamped permanent galleries help make Singapore’s history accessible. Rather than adopting a stodgy, academic chronology of Singapore’s past, the galleries provide a simplified and focused narrative. We feel this serves to highlight Singapore’s storied past without overwhelming the interest of the casual visitor.

The permanent galleries are now a much better shared space than before. Object labels allow groups and families to experience the exhibits together. Little push buttons invite little hands to animate exhibits such as the zoetrope in the Growing Up gallery where a “torch” gets “passed from one generation to the next”. At the Object Theatre and Jurong Drive-in, visitors can sit and pause to share a memory.