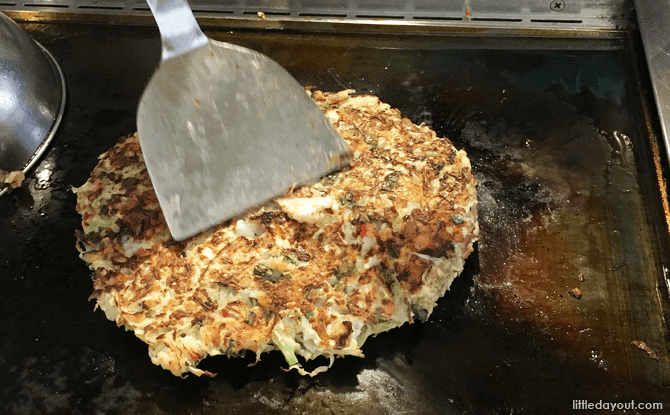 Ready for some fun with food? Make your own okonomiyaki in Harajuku, Tokyo, at the Sakura Tei restaurant.

Quest for Okonomiyaki in Tokyo

We set off on a food quest for DIY okonomiyaki in Tokyo. Okonomiyaki is a cabbage-based pancake, fried on on hot griddle and smothered in sauce. 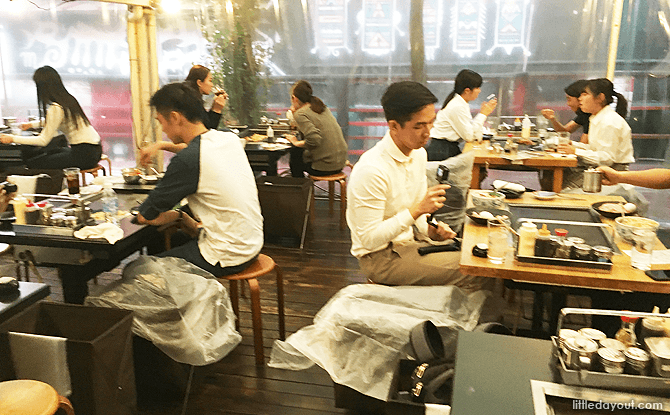 At Sakura Tei in Harajuku, you can not only make your own okonomiyaki but try making yakisoba and another pan fried dish, monjayaki, too.

Yakisoba is a table-top fried noodles while monjayaki is similar to okonomiyaki but with a sticky texture and eaten straight off the griddle.

Make Your Own Okonomiyaki 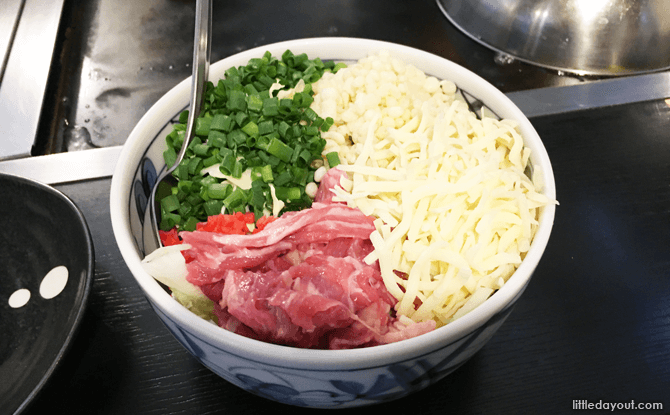 After ordering the okonomiyaki from the menu, our ingredients arrived at the table in a big mixing bowl. We chose the Demi Toma Cheese Okonomiyaki which came with a tomato-based demi-glaced sauce. 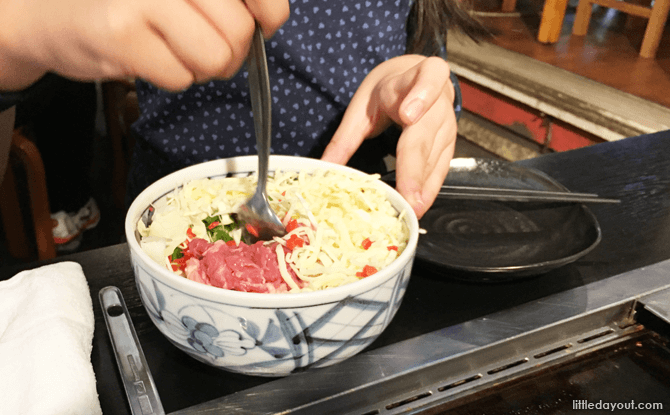 The first step to pan-fried goodness was to give the ingredients a good mix. The mixture then gets dished out on to the flat pan set into at the table. We fashioned it into a circle as best as we could and left it to fry. 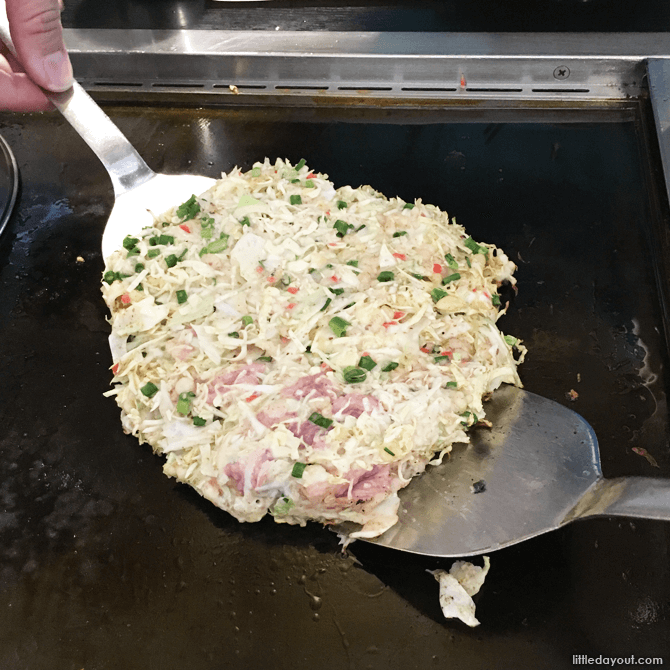 Once the bottom has been fried crispy brown, it is time to flip it. The trick is to use both of the spatulas provided and flip it in one quick motion. 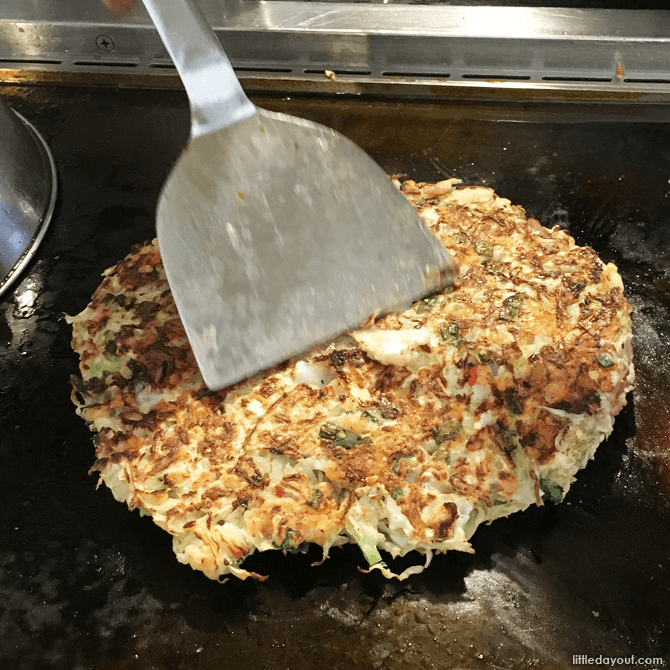 Once the other side has been fried, it was time to add the special demi-glaced sauce on top. The okonomiyaki can also be dressed up with seaweed, mayonnaise and Bonita flakes found at the table.

It is good fun frying the okonomiyaki. We mustered up our best okonomiyaki chef mojo and, thankfully, it didn’t turn out too badly in the end. 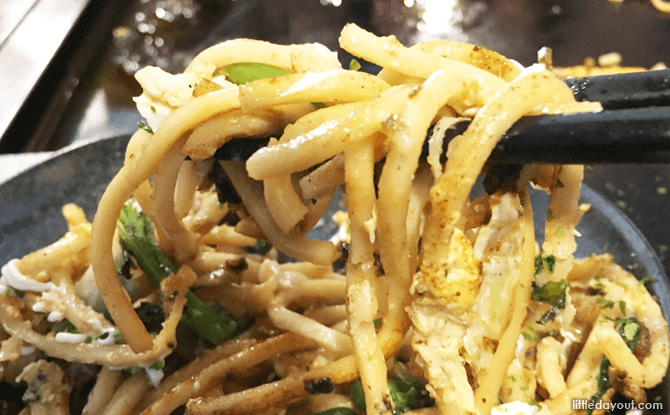 Yakisoba, fried noodles, is cooked in a similar way at the table. 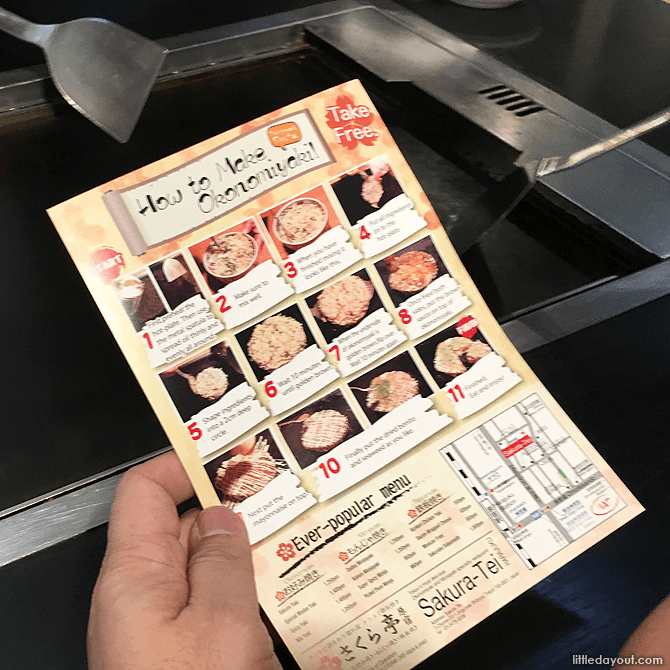 When in doubt, follow the instruction pamphlet found at the table.

Monjayaki – Eat Off the Pan

Next up was monjayaki, a popular dish in the Kanto region. It is also known simply as monja. We were not familiar with this dish before our visit so it was a must-try when we saw it on the menu.

This dish is similar to okonomiyaki in that it is cabbage-based. However, there is a lot more liquid at the bottom of the ingredients bowl.

We ordered the Oudou Monjayaki which includes spicy cod roe, mochi and cheese. 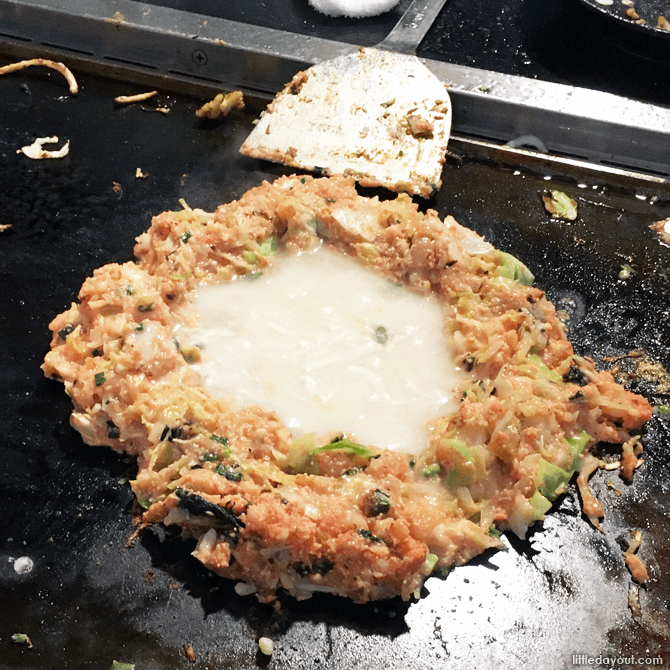 We careful tipped out the ingredients on to the griddle, leaving the liquid in the bowl. These were fried first and the shaped into a ring like a volcano’s crater. Into the crater we poured the liquid that remained at the bottom of the bowl and slowly mixed the ingredients with the liquid. 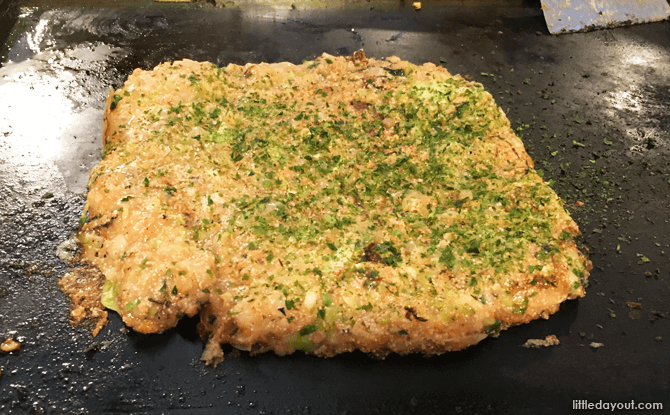 Once simmering, the monjayaki was spread out into a thin layer on the pan. This is where the cute mini spatulas we had been provided with came in. We used them to pull apart the monjayaki from the pan. It had a gooey, starchy texture.

Making your own okonomiyaki is a fun food experience in Tokyo. Sakura-tei at Harajuku is in a convenient district but a bit tricky to find. 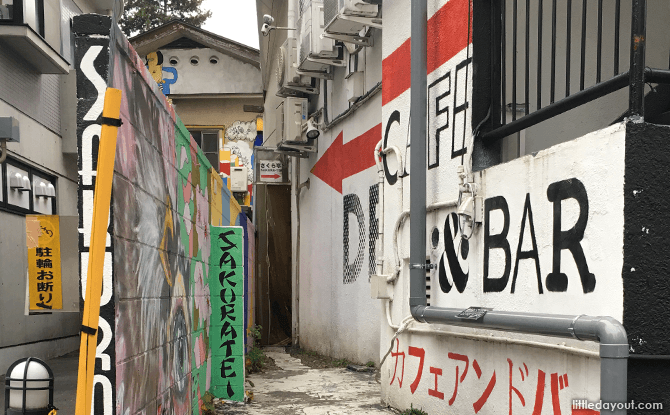 It is located in an artsy and bohemian part of Harajuku, not far from the famed Takeshita Street. You will need to navigate between narrow alleyways between buildings before arriving at Sakura Tei. The atmosphere at Sakura Tei is youthful and the restaurant is decorated with art on the walls. However, we spent most of our time staring at the griddle to make sure our lunch didn’t get burnt instead.

With young children, you do have to mindful that they do not get splattered by the oil from the pan but, other than that, they will love playing mini chefs at the table. Plus, okonomiyaki has the additional upside of being a delicious way of getting them to eat their vegetables too!