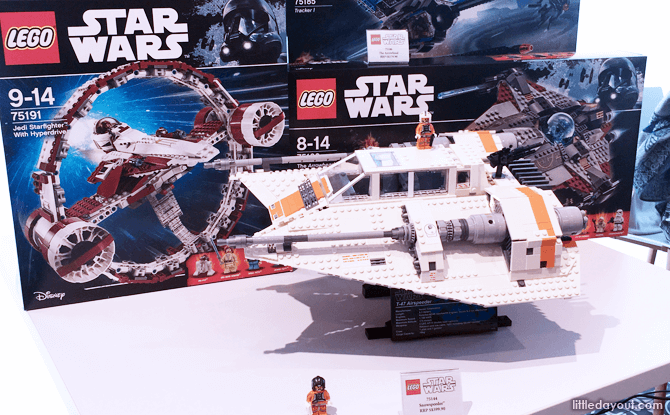 The new LEGO Star Wars Classic Collection 2017 will be launched in Asia in May 2017, ahead of other regions around the world. This news was announced by Ms. Vera Ivanova, LEGO’s Marketing Director, SEA, on 26 April 2017 at a media event.

The 10 new LEGO sets in the Classic Collection 2017 recount epic scenes from the Star Wars movies. They will be available in Singapore at Toys R Us, LEGO Certified Stores and toy shops. They will also go on sale at LEGOLAND Malaysia Resort.

Here is a closer look at four of the sets in the new LEGO Star Wars Classic Collection 2017.

Recreate Anakin’s chilling transformation into evil Darth Vader with this LEGO® brick recreation of the medical bay scene from Star Wars™: Revenge Of The Sith. This detailed set features a table, with space for Anakin, that lowers and flips to reveal Darth Vader, Emperor Palpatine’s greatest creation.

It includes a helmet applicator and force explode function. The set comes with 3 minifigures and 2 buildable droids figures and measures over 3” (10cm) high, 6” (17cm) wide and 8” (22cm) deep.

Destroy the droids with the Republic Fighter Tank. The tank features an opening top hatch with minifigure cockpit, 2 elevating guns with stud shooters, rear ammo store and hidden wheels for a hover look.

Other sets that will go on sale include: