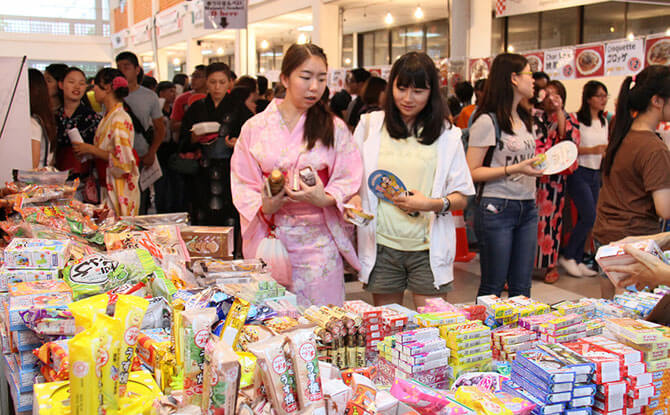 On 8 and 9 September 2018, the Japan Summer Festival, held in conjunction with the Sports Hub Community Play Day, will turn the National Stadium at Singapore Sports Hub into a huge festival ground with more than 95 booths, featuring traditional Japanese games, food, drinks, and merchandise.

As if that isn’t enough, taking centre stage will be an exciting lineup of shows, including a Taiko drum performance, Domobics (an aerobics dance performance named after the beloved Domo mascot), and even a Hawaiian Hula dance.

The Japan Summer Festival will be a great way to get the whole family out of the house for some fun as you say “sayonara” to the school holidays, and “konnichiwa” new school term!

As you enjoy your pick of the mouthwatering Japanese snacks available, keep a look out for Domo and Pikachu at the Japan Summer Festival and be one of the few to score a meet-and-greet with these iconic Japanese characters!

Participants will have their hand-eye coordination tested in several Pokémon-themed game stations such as, “Let’s Battle Pikachu”, “Squirtle Yo Rescue” and “Gengar Shadow Ball”.

A carnival like the Japan Summer Festival at Singapore Sports Hub just wouldn’t be the same without traditional favourites like Yo-Yo Tsuri, involving fishing for water balloons using a frail paper string with a hook; Shateki, where participants can shoot at their target prizes to win them; and Senbonbiki, a game in which participants can choose from a multitude of strings to pull, to see if he or she will win a prize.

Enjoy these games at the Japanese Association’s Game Corner.

With the theme “Fun on Wheels”, the Sports Hub Community Play Day will also be held concurrently with the Japan Summer Festival at Singapore Hub. Enjoy arcade games like Daytona and Initial D as well as popular Japanese-made arcade games such as Dance Dance Revolutiona and Bishi Bashi.

If you are yearning for more than just arcade games, there will be Singapore GP F1 Roving Truck on site. Pit your skills and reflexes on racing simulators here!

If you have always wanted to don a yukata, you can do so at the Japan Summer Festival held in conjunction with Sports Hub Community Play Day. For $15, rent the traditional Japanese summer garment on Saturday and Sunday afternoon. Renters can wear the yukata until the end of the event at 9:10 pm on Saturday and 8:10pm on Sunday. Yukatas are limited and available on a first-come-first-served basis, so get there early!

Each day of the Summer Festival will conclude with the Bon Odori. Visitors can take part in this traditional dance while wearing the yukata (and you thought you’d only be catching pokemons in it).

[Editor’s note: Saturday tickets for the event have been sold out.]