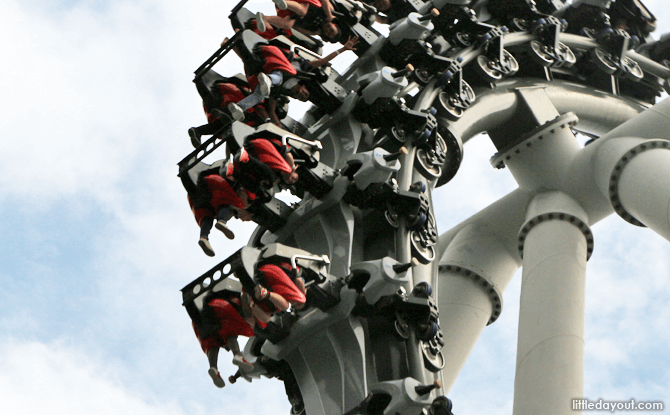 Here is a quick guide to all the Universal Studios Singapore rides and attractions at the different themed zones. 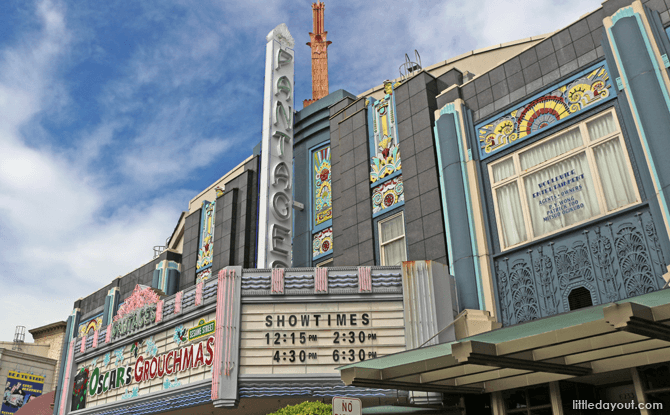 Modelled after Los Angeles’ Hollywood Pantages Theatre, the Universal Studios Singapore Pantages Hollywood Theatre is the grand setting for shows and performances that take place at scheduled times throughout the day. It is a great place to take a break from the rides and rest your feet while enjoying a show. 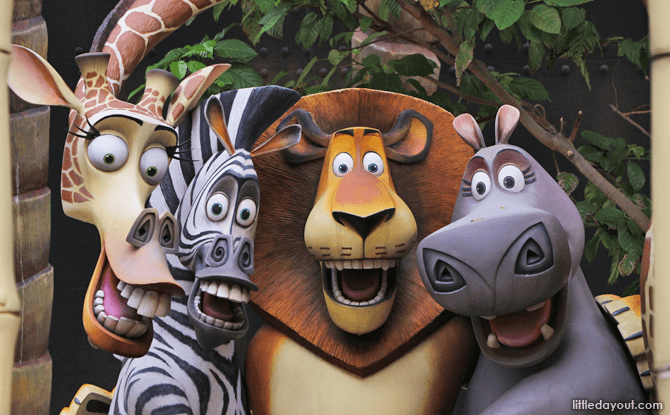 This is a dark ride attraction based on the Dreamworks animated movie, Madagascar. Climb into a raft and journey along with Alex and the gang as they get stranded in a strange land and have encounters with the natives, including the foozsas and crazy King Julien. 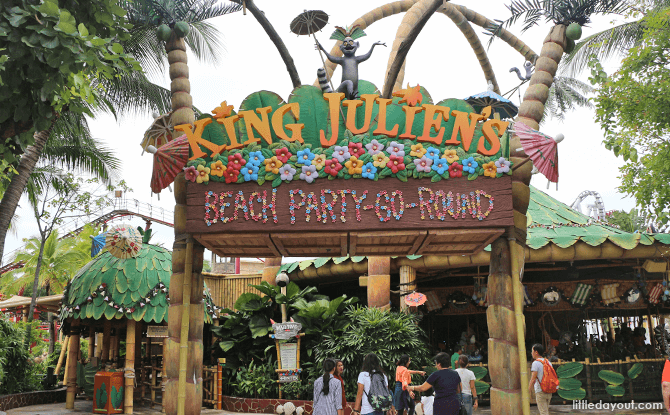 A Madagascar-themed merry-go-round where you can party and ride with the characters from the hit animated show. Go for a ride with Marty the Zebra and other zany characters. Our favourite has to be the old lady with the handbag. 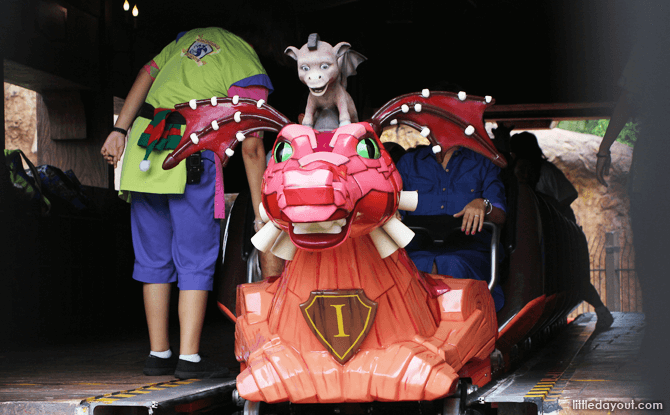 The Enchanted Airways is now boarding. Passengers can strap themselves into this Universal Studios Singapore ride, a junior roller coaster. 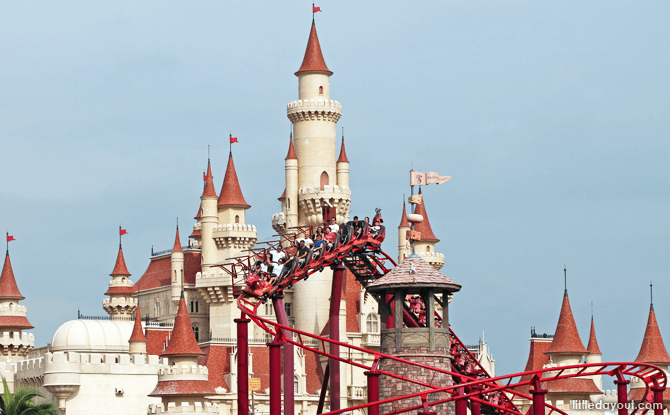 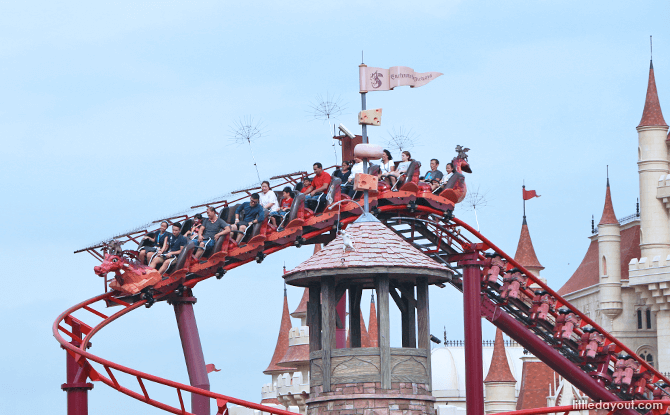 Swoosh and swoop on a dragon-themed train around which provides an excellent view of the lake. At the same time, keep a lookout for characters such as Pinocchio and the Big Bad Wolf. 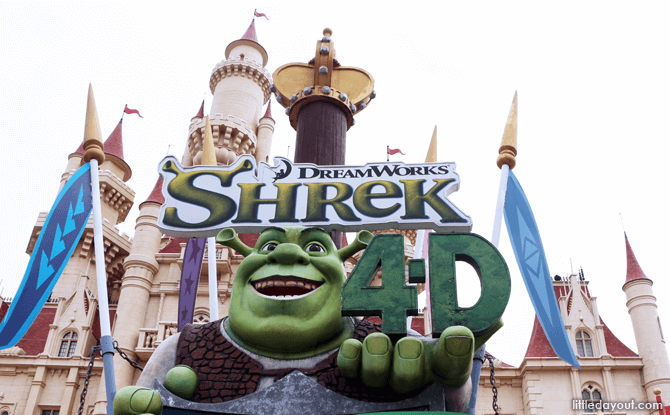 Venture into Universal Studios Singapore’s castle for a magical encounter with all the characters from the hit Dreamworks animated movie. The experience begins with an encounter with the Magic Mirror before the audience is ushered into a theatre for a big-screen show with some 4D surprises. 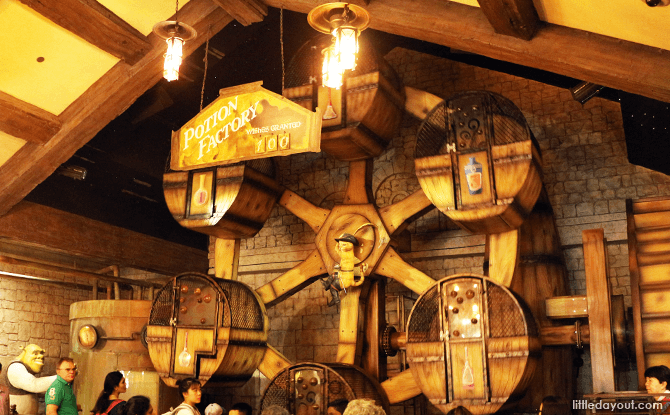 Tucked away inside the Potion Shop at Far Far Away, this is Universal Studios Singapore’s tiniest ride. Young children can go for a spin around a mini-Ferris wheel. Get to meet one of the stars of Shrek at Donkey LIVE. The zany Donkey entertains the crowds in a comedy club-style setting and interacts with audience members. Enter the swashbuckling world of Puss In Boots at this Universal Studios Singapore ride. The ride’s suspended carriage brings riders along with Puss In Boots as he attempts to save the day.

In a post-apocalyptic world, the ice caps have melted and the surface of the earth is covered by water. The Mariner takes on the baddies, the Smokers, in this live-action show on the water. Expect stunts and explosions. Experience the sensation of flying and get an aerial view of The Lost World themed area at on this Universal Studios Singapore ride. 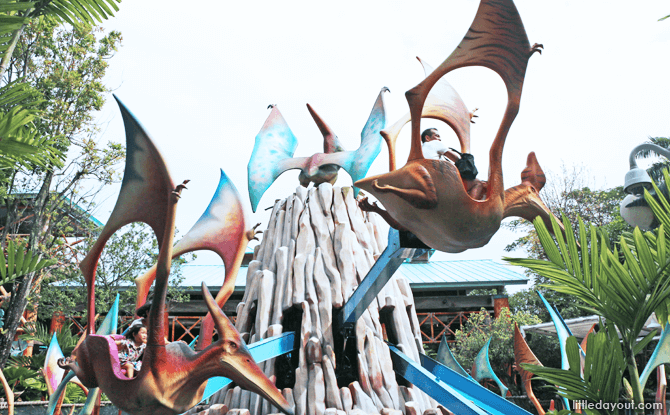 Pteranodon-shaped carriages circle round and round at Dino-Soarin’. Inside, a control stick lets allow riders to direct the flying dinos up and down.

Scale up the rock climbing wall at the rear of The Lost World and hunt for fossils. Go on a thrilling ride through Jurassic Park in a nine-seater raft on an expedition to view dinosaurs. However, something has gone wrong and you will need to evacuate immediately mid-way through in this fun and exciting water ride. Expect to get wet on this ride. Go on a drive through the desert in a jeep as you look for lost explorers at an abandoned excavation site. This Universal Studios Singapore ride is suitable for younger children. This indoor roller coaster is based on The Mummy movie franchise. Riders get into a minecart and roll into the tomb in search of the Book of the Living to kill Imhotep. This high-speed thrill ride that reaches up to 72 km/h with sharp turns and drops. One half of the pair of Universal Studios Singapore’s duelling roller coasters, the tallest in the world, HUMAN is a seated rollercoaster which reaches up to speeds of 90 km/h. There are no inversions in HUMAN. Riders on CYLON sit with their legs free on this suspended roller coaster. It features loops and inversions including a zero-g roll, barrel roll and big loops. 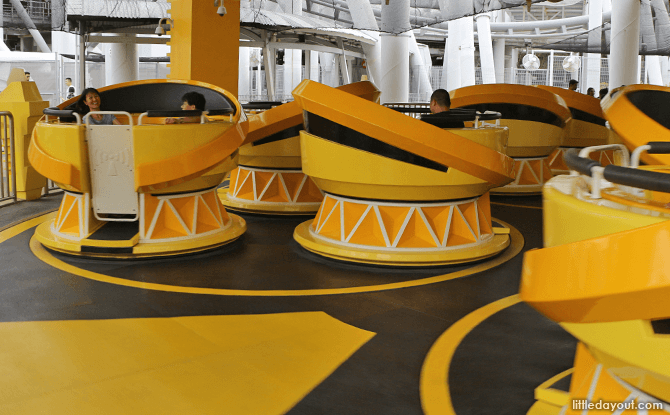 Ride with EVAC, a Transformer, as he goes on a mission to help protect the All-Spark from the Decepticons. The TRANSFORMERS ride is a thrilling ride that combines 3D graphics with motion for a thrilling adventure. Join Elmo and Super Grover as they venture into space to save the world’s spaghetti from being stone by Macaroni the Merciless. This is a dark ride that is suitable for young children. 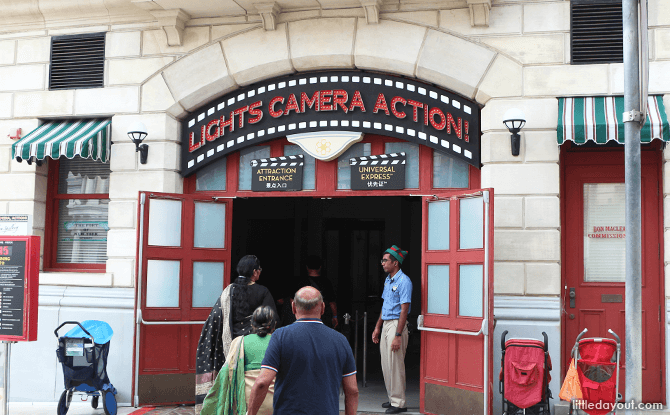 Hosted by Steven Spielberg, discover how movie magic is made on a sound stage where a hurricane is recreated before your eyes.