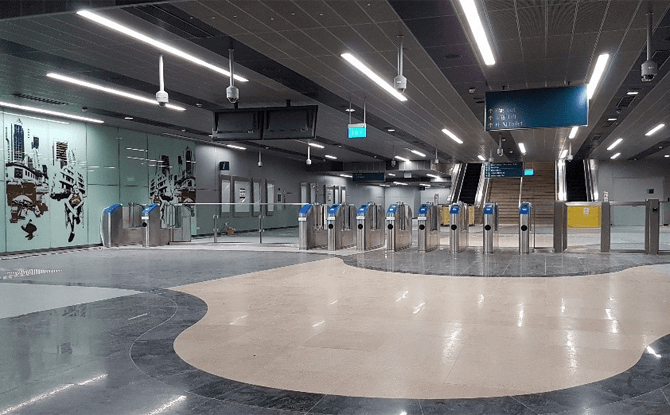 The new Downtown Line 3 will start service on 21 October 2017. This new MRT line starts off in town and stretches across the eastern heartlands of Singapore before ending at the Singapore Expo.

Here are some interesting things to know about the new Downtown Line 3 – in numbers.

Number of Stations on the DTL3: 16

There are a total of 16 stations on the Downtown Line 3. These are the Fort Canning, Bencoolen, Jalan Besar, Bendemeer, Geylang Bahru, Mattar, MacPherson, Ubi, Kaki Bukit, Bedok North, Bedok Reservoir, Tampines West, Tampines, Tampines East, Upper Changi and Expo. This is the largest number of stations to be opened among the various stages of the Downtown Line.

The combined length of the Downtown Line is 42 km, making it the longest MRT line in Singapore, beating the 35.7 km long Circle Line.

There are three interchange stations on the Downtown Line 3. These are MacPherson, Tampines and Expo Stations.

The MacPherson Station connects the DTL to the Circle Line.

The Tampines and Expo Stations cross with the East-West Line.

Number of Stations That Are Civil Defence Shelters: 8

The Downtown Line 3’s Bencoolen station is the deepest MRT station in Singapore. It is situated 43 metres below the surface.

This was necessary because of factors such as the other transport infrastructure in the area, i.e. the North-South line and Circle line.