Home Play Bridges Over The Singapore River: A Singapore Story 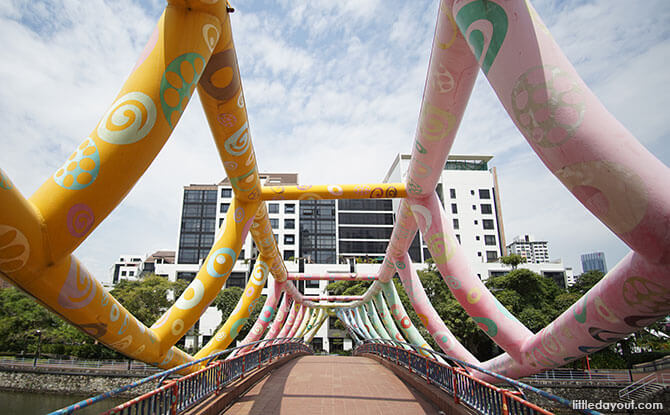 For almost 200 years, Singapore River has been at the heart of the Singapore story. From the arrival of the British to the burgeoning wealth of the local population, Singapore River tells of the fortunes of the tiny trading outpost which grew and grew.

The first crossing from the north to the south bank of the Singapore River used to stand at the site of the present-day Elgin Bridge. While the current Elgin Bridge only dates back to the late 1920s, the first bridge was to occupy the location was built more than a hundred years before in 1822.

At that time, Singapore had only just been established four years ago by the British East India Company. A bridge was built at the point where the Singapore River narrowed while still allowing boats to access the area that is currently Boat Quay.

The bridge was part of the Jackson Plan – Singapore’s first urban masterplan. This was formulated by Lieutenant Philip Jackson to bring about some order to the development of the new settlement. It would link the Chinese district in the south with the European Town on the north bank.

Under the plan, a wooden drawbridge was built. It was known as the Jackson Bridge.

The current Elgin Bridge is the fourth bridge to be built on this site. It was constructed in 1929 to accommodate a higher load of modern traffic. To decorate the bridge, it features cast iron lamps designed by Italian sculptor Rudolfo Nolli who was also responsible for the marble bas-relief figures at the entrance hall of the Tanjong Pagar Railway Station.

For almost 20 years, there was only one bridge crossing the Singapore River. It was not until 1840 that a second bridge was erected.

This new bridge was designed and named after George Coleman, Singapore’s first architect. However, that did not stop it from being referred to colloquially as the New Bridge (as opposed to Jackson’s old bridge a short distance away).

The current Coleman Bridge is a modern construction that was completed in 1990.

From Wood To Metal

In the 1860s, a series of wooden footbridges that were built across the narrower, upper reaches of the Singapore River, and one near the mouth of the river.

These provided people with an alternative means of crossing the river beside paying a boatman to ferry them across. However, as traffic increased, these early footbridges were gradually replaced.

At the mouth of Singapore River, Cavenagh Bridge was completed in 1869 to replace a footbridge. It was one of the first few suspension bridges in the region. The bridge provided a connection between the government offices on the north bank and the commercial district on the south bank.

The bridge was named for Major General Orfeur Cavenagh, the last Governor of the Straits Settlements to be appointed by British India.

Today, Cavenagh Bridge is the oldest bridge across the Singapore River still in its original form.

In the Clarke Quay area are two bridges that hold the distinction of being the second and third oldest bridges across the Singapore River.

The industrial-looking Ord Bridge was completed in 1886. It is after Sir Harry Ord, the first governor to be appointed after Singapore became a Crown Colony in 1867, reporting directly to London rather than to India.

Around Ord Bridge, there used to be toddy or liquor shops and hence, the bridge also used to be known as Toddy Bridge. Nowadays, the toddy shops are gone and the old Ord Road has also disappeared, replaced by Liang Court mall.

Nearby is Read Bridge, completed in 1889 and named after William Read, an active and prominent member of Singapore society from 1841 to 1887.

Read was a respected businessman and member of the Council that oversaw the transfer of Singapore’s control from British India to the British Colonial Office in London. He is also credited in helping to mediate between the Hokkien and Cantonese communities in Singapore in 1854. However, Read Bridge is best known as a location where Teochew storytellers would entertain the crowds in the evenings, telling a story for a fee.

By the turn of the century, Singapore was enjoying a measure of economic success. This placed pressure on existing infrastructure like bridges.

At the mouth of the Singapore River, this led to the construction of the Anderson Bridge. 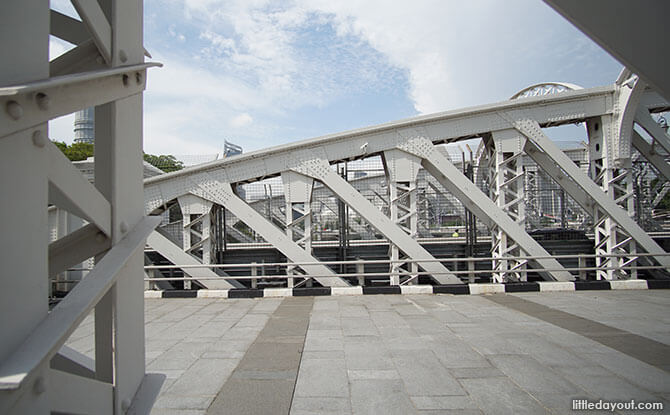 Anderson Bridge also has the dubious distinction of being where Japanese soldiers would hang up severed heads as warnings during the Japanese Occupation.

The current Clemenceau Bridge is a multi-lane bridge built-in 1991 that connects River Valley Road with the Central Expressway tunnel.

However, its predecessor, demolished in 1989, had a more ominous link to the past.

Constructed between 1938 to 1940, the previous Clemenceau Bridge was the last bridge to be built over the Singapore River before the Japanese Occupation in 1942. It is named for Georges Benjamin Clemenceau, the French Prime Minister during World War I, who visited Singapore in 1920.

In the years leading up to the 2000s, a new series of bridges were built over the Singapore River. 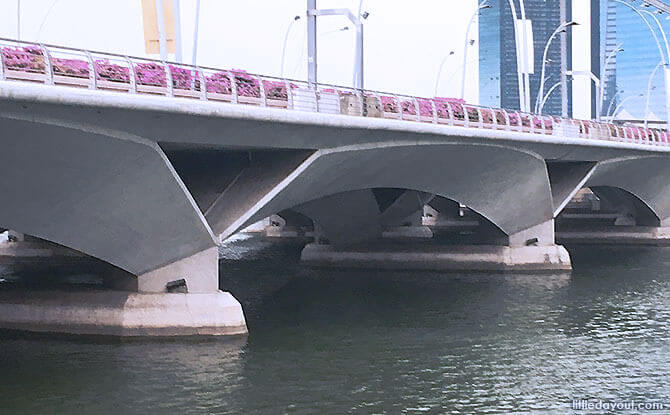 Esplanade Bridge and Pulau Saigon Bridge, both vehicular bridges, opened in 1997. They both pay tribute to the past. The former is named for the waterfront area in front of the Padang while the latter references an island that used to be located within the Singapore River.

Robertson Bridge, Alkaff Bridge and Jiak Kim Bridge are pedestrian bridges located in the upper reaches of the Singapore River.

They provided connections between the Robertson Quay and the Kim Seng Road areas.

One other bridge found at the upper reaches of the Singapore River is the Kim Seng Bridge. The bridge was originally provided as a thoroughfare for the public by prominent merchant Tan Kim Seng in 1885. It was reconstructed in 1954 and marks what is traditionally considered the source of the Singapore River.

The newest bridge to have opened is the Jubilee Bridge in 2015.

Located at the mouth of the Singapore River, this pedestrian bridge connects Merlion Park with Esplanade Theatres on the Bay. Poignantly, it also marks the divide between the Singapore River and the Marina Bay area – the old and the new.

In the earliest days, a single bridge was all that was needed across the Singapore River. The bridge helped to bring some order to the newly established settlement of Singapore.

In more recent years, the newest bridge at Singapore River reflects Singapore’s confidence for the future.

Collectively, the various bridges over the Singapore River tell an interesting story of Singapore growth and development as a city.