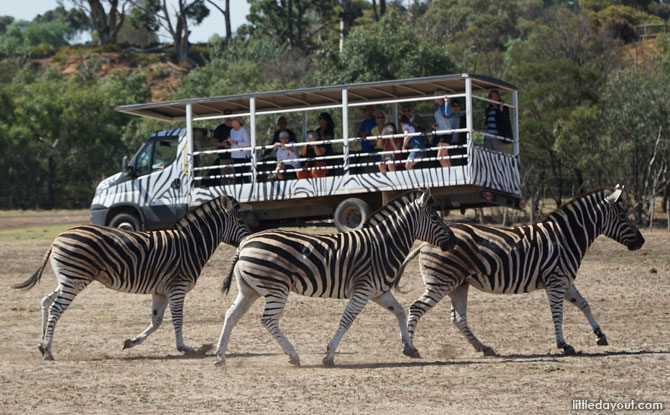 Melbourne is known for its hip café scene, cosmopolitan lifestyle and day trips out to lush, green nature. But little did we know that we could go on an African safari in Melbourne – which is exactly what we did when we visited the Werribee Open Range Zoo.

Run by Zoos Victoria, the Werribee Open Range Zoo is about 35 km from the Melbourne city centre. After a 40-minute drive, we pulled into the car park and made our way to the ticketing counter. 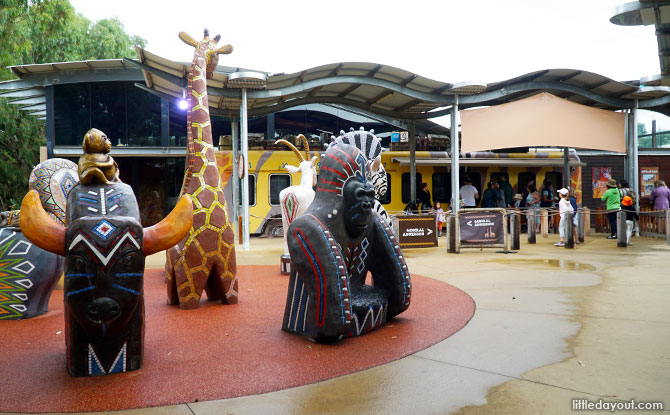 The zoo’s entrance was decorated in the African theme, hinting at what lay inside. 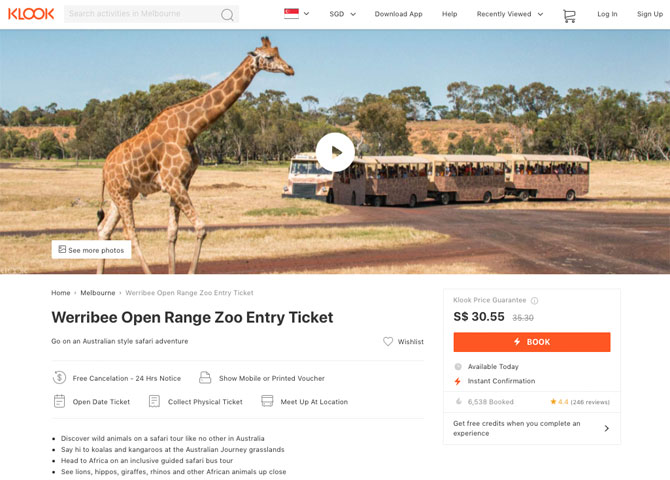 We had made our booking for the Werribee Zoo tickets through Klook and showed the e-voucher on our phone to the lady at the ticketing counter. She issued us with a set of tickets, map and a friendly “Have a great day, guys” and we were off on our adventure.

The Werribee Open Range Zoo has three walking trails where we could view the animals on foot. Standard entry tickets include a Safari Bus tour. 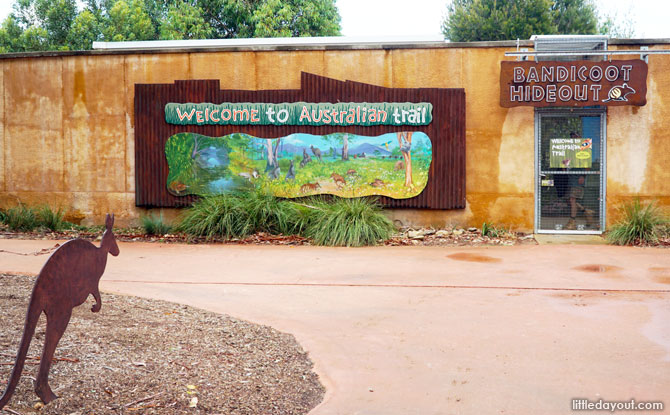 We started with the shortest of the walking trails – the Australian Trail. The trail started inside a little hideout where we diligently tried to spot a bandicoot, a small marsupial that looks like a mouse. As we walked about the Australian Trail, other animals we spotted included kangaroos, emus, koalas and orange-bellied parrots. The Australian Trail also has a woolshed that we stepped into. It provides a glimpse into the olden days of the wool trade. Connected to the Australian Trail is the River Trail. This runs through grassland, down to the Werribee River which gives the area its name.

The second Werribee Zoo trail that we explored, the African River Trail, was more in keeping with the park’s safari theme. As we ventured along the tall grass-lined path, for a moment, we felt as if we were trekking through the jungles of Africa. 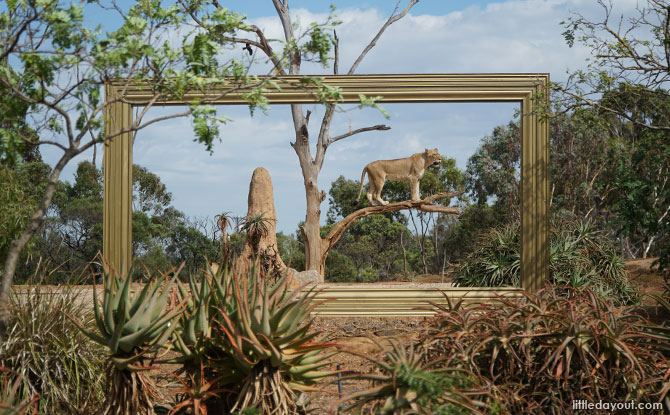 One of the trail highlights is the daily lion presentation by the keepers. Held at 11.30 am, we joined the keepers as they shared about the pride of lions at Werribee Zoo. It was an amazing experience to watch as these strapping young lions pace just metres away, behind a glass wall. The lion exhibit at the Werribee Zoo is the best that we have seen at any zoo we have visited. Do arrive early as the seating area fills up quickly for this popular presentation.

Themed Areas Add to the Experience 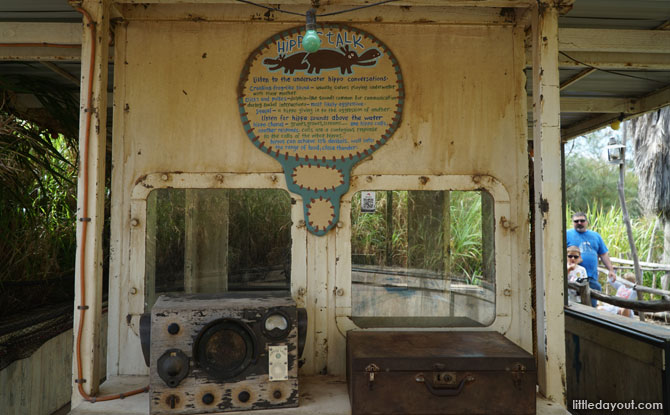 One example was the Kubu Queen, a viewing area by a lake which designed to look like a old ship for kids to enjoy and play on. The lake was the home of one of the park’s hippos. However, the hippo was pretty elusive, cooling off under the waters of the lake, only occasionally coming up for air for a blink-and-you’ll-miss-it moment.

Even if they don’t get to see the hippo, kids will probably be distracted by Hippo Beach, a play area close by. There was also a café nearby to refuel the tummy. It served light bites such as pies and sandwiches. Other animals that can viewed along the African River Walking Trail include a cheetah and gorillas. By now, we were revved up to head on safari! At the Safari Station, we climbed aboard a Mad Max-looking bus. We later found out that it had been designed to be rhino-proof! As the bus chugged off into the dry grassland, we passed hippos, camels, ostriches and antelope. One of the animals we were particularly interested to see was the bison but they were off in the distance, lazily grazing. Passing over a river, there were Texan Longhorns in one enclosure which, our guide explained, were not from Africa but meant to represent similar-looking cattle found in Africa. 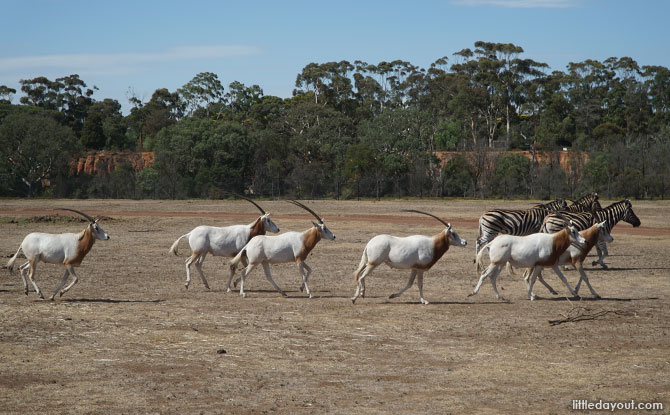 Eventually, we arrived at the savannah enclosure where zebras, rhinos, giraffes and ostriches roam freely together. The bus made its way along the road that led right through the enclosure and we were thrilled to be so close to the animals – with no cages in between us and them!

Little did we know that the adventure was just starting.

On the day of our visit, the zoo had just introduced a herd of orixes into the savannah enclosure. These African antelope had just decided to venture down from a hilly corner where they had spent to morning to the main grassland area. This did not sit too well with the giraffes who decided to show them “who’s the boss”. We were simply amazed as we watched the herd of giraffes galloping about in front of us, chasing after the orixes. This riled up the zebras who also got into the act while the rhinos stood by, surveying the circus unfolding in front of them. The running animals also meant that the safari bus had to come to a stop to avoid the animals and further riling them up. This was perfectly fine with us as we got treated to an unplanned ‘live’ animal show while we waited. Eventually, the rangers arrived with food and all the animals started to settle down. Perhaps, the giraffes were simply “hangry” (hungry and angry) to begin with.

Whatever the case, it was an amazing experience and a wonderful memory to take home from an unexpected day out to the Werribee Open Range Zoo.

Buy Tickets to the Werribee Open Range Zoo From Klook

We bought our tickets to the Werribee Open Range Zoo from Klook.

When we purchased our admission tickets, the price of the adult tickets on Klook as cheaper than buying it from the zoo directly. Do take note that children between 4 to 15 can enter the zoo for free on certain days, so check the zoo’s website beforehand.

You can purchase tickets to the Werribee Open Range Zoo on Klook from here.