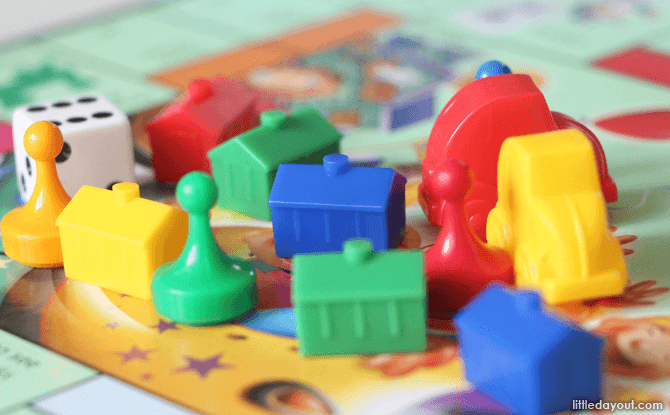 To say that board games are enjoying a revival is slightly understating it. There are an increasing number of fun board games for family time that adults and children can enjoy together.

The board game industry (yes… its an industry!) is showing its biggest growth over the past 10 years. Some of the most successful projects on crowdfunding platforms are board games. And, there’s a good reason for the revival… board games are better designed, better play-tested so much that they are… just better!

Fun Board Games for Family Time

So… if you enjoyed the odd game of Monopoly or Cluedo when you were younger… recall busting out Scrabble or Boggle… here are five fun board games for family time that will let you relive your retro 80s game evenings with family and friends. While I’ve taken some liberty in interpreting what constitutes a “board game”, these are all tabletop games that will certainly not keep you ‘bored’!

If you liked Monopoly, try… TICKET TO RIDE

Monopoly continues to be a staple game in today’s board game market. The game itself has been re-themed hundreds of times. It’s also panned by lots of people as being very luck-driven, extremely long and, well, just a bit boring. 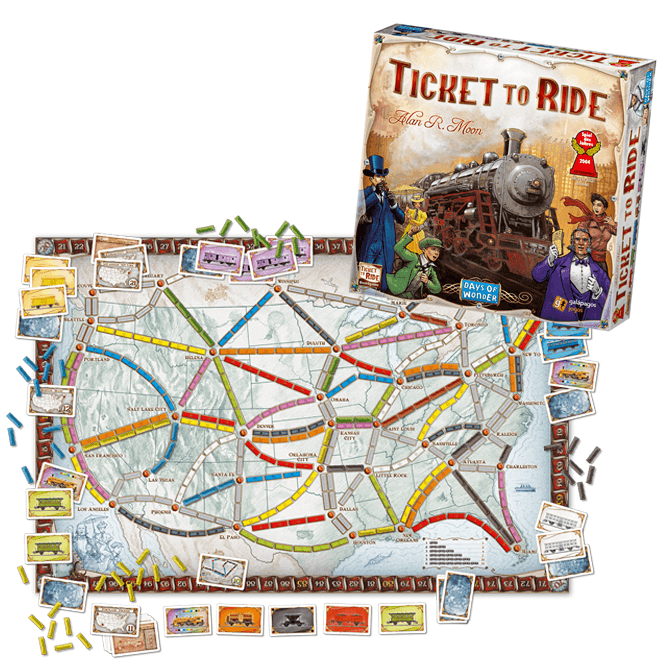 If you liked Monopoly, one of today’s games of choice is TICKET TO RIDE. Ticket to Ride is a game for two to five players where you vie to have the most points. You earn them by claiming various routes on a map and collecting sets of coloured train cards during your turn.

You also have to strategically decide when to claim a route or plan for an alternative if one is snatched from you as you also earn (or lose!) points trying to complete objectives requiring you to connect two different locations on the map together.

Ticket to Ride is quick-to-learn, and the board plays out beautifully before you as routes are claimed in the colours of each player. Turns also move quickly, meaning there is very little down time in between turns, keeping players engaged. This is one game that should be on your list if you are looking for fun board games for family time.

If you liked Scrabble, try… PAPERBACK

Like Monopoly, a Scrabble game can go for quite some time. Not just that, it almost always seems like the player with the better vocabulary always wins, putting off others. That’s not a bad thing but it is hardly fair in a contest between adults and children. 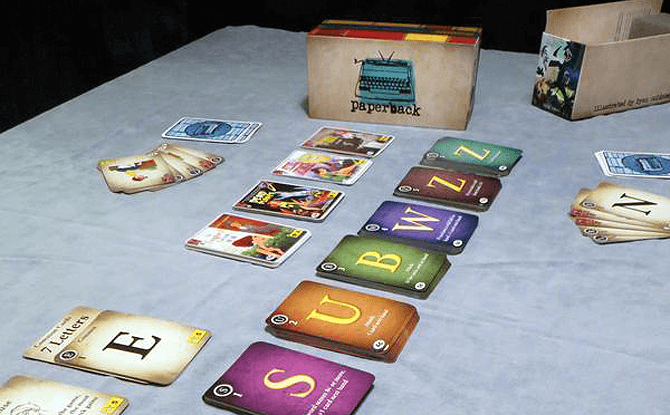 These days, word games come in many shapes and sizes. Paperback, is one such game that gives players a feeling that they always have a fighting chance!

In Paperback, players start with a standard hand of letters and wild cards to make their first words in the game. Each turn, they try to make words from five of the cards in hand.

The points they earn then allows them to buy more quixotic letters on display. These letters also have special effects that if you manage to use them in subsequent words, give you some special abilities.

Some are worth more points if played at the end of a word and others might allow you to have extra cards (and therefore letters) in your next hand with which to make longer and more valuable words.

There are also two lettered variants like ‘ed’ or ‘st’ enabling you to make longer words. As such, its not just having a good vocabulary, its also figuring out how best to use the points you earn each turn to purchase the ‘right’ cards on display to go with the ones in your hand that will win the game.

If you liked Cluedo, try… OUTFOXED

Cluedo, like Monopoly, is still around today. The gameplay is still solid and requires good deductive reasoning to win. I know a number of parents who have this as they try to get their kids to start using their mind to analyse things better.

If you liked Cluedo though… try OUTFOXED. 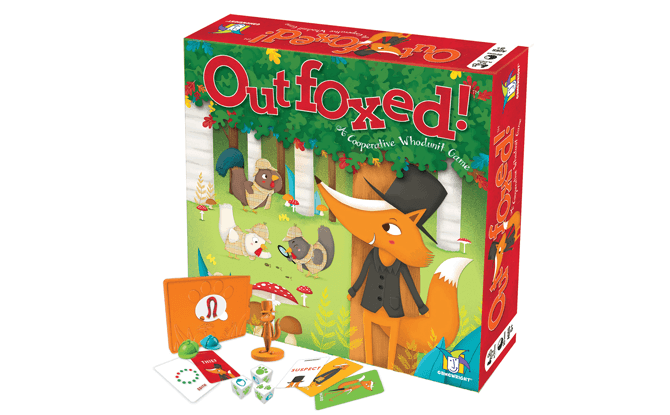 Outfoxed is a cooperative children’s deduction game where a villainous fox having stolen a pie has to be identified before he escapes. Players move around the board gathering clues that they then use a unique evidence scanning tool in the game to rule out various characters. Each of the fox suspects has unique features, such as hats, spectacles, that enables them to be ruled out.

Outfoxed takes the deduction aspect to a co-operative form, thus enabling younger kids to experience the thrill of the chase and the ability to actually discuss amongst themselves in order to beat the game.

Snap! is a childhood game that has seen many different iterations over the years. The game was one of reaction and hand-eye coordination to move quickly once you saw a matching card so that you could claim it with a victorious SNAPPPPPP yell!

Today’s version of Snap is the ingenious Spot It! 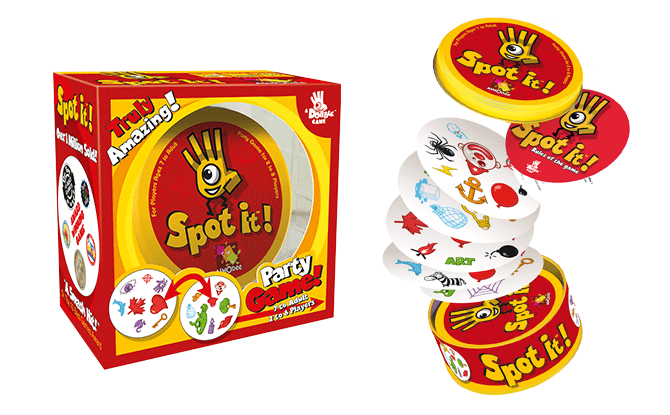 In each deck of Spot It, a subset of a variety of objects is presented on each of the cards. The unique nature of the deck is such that each card only has one and only one object in common with any other card. Each player is then dealt a hand of cards which they must then match against the common displayed card.

The game takes Snap to the next level as every player is looking for the common item he or she has in their hand versus the common card, and in all cases, this is a different object entirely!

Easy to pick up and explain to young kids, this game has seen many rounds of play in our house. Spot It also has a ton of themed varieties, with Disney, Camping, Sports versions of the game as well. Pick your own preferred theme to suit your tastes!

Dexterity games like Pick up Sticks and Jenga all saw long game times when I was young.

Jenga built patience, steady hands and good hand-eye coordination. It also had the positive of being very easy to teach and kids liked watching the tower fall as much as playing the actual game! 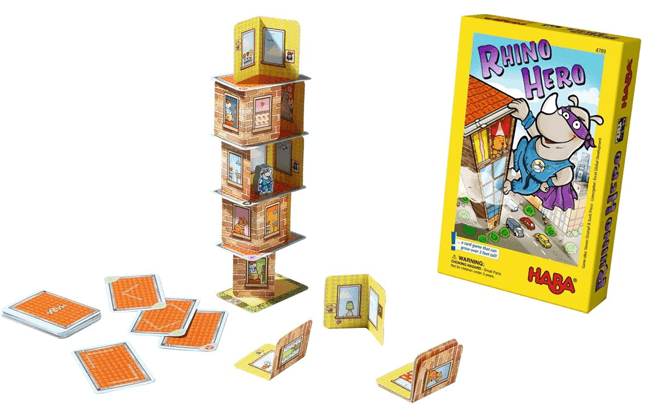 In Rhino Hero, players are building a tower of cards trying to get rid of the ‘roofs’ they hold in their hands. Each turn as you play a roof card, the card also might require the next player to perform an activity that gets harder as the tower grows. There’s even a tiny super-hero Rhino included that could foil your tower-building plans if you are required to move him from level to level during the game.

A fantastic little game that all kids seem to love whenever I bring it out at gatherings or parties.