Home Play 3 Things To Look Out For At The Woodlands TEL1 Open House... 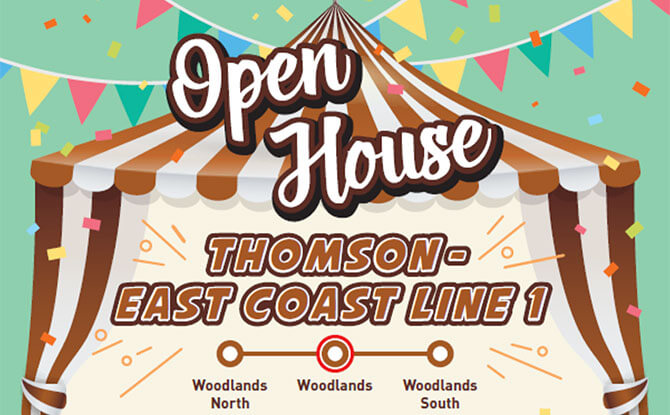 Singapore’s sixth MRT line, the Thomson-East Coast Line 1 will added a further 32 MRT stations to the rail network. Also know as the TEL line, it will start to open in stages from 2020 and be fully open five years later in 2025. Woodlands residents can look forward to a preview of the new line with a special open house at three Woodlands MRT stations on 11 January.

Here are some 3 things to know about the Woodlands MRT Open House.

Three of the TEL1 stations will be open for the public to familiarise themselves with its facilities on 11 January 2020. These are the Woodlands North, Woodlands and Woodlands South MRT stations. The Woodlands MRT station will also serve as an interchange for the TEL1 with the North-South Line.

The stations will be open for operation on 31 January 2020. There will be three days of free travel, from 31 January to 2 February 2020, for commuters to familiarise themselves with the new line and stations.

If you intend to stop by the Woodlands MRT Open House on 11 January, take note that it will be held from 9 am to 6 pm.

For those who are visiting the TEL1 Woodlands MRT stations open house on 11 January, some of the activities which you can expect include carnival games, family-friendly activities and performances. The Thoughtful Bunch, ambassadors for good behaviour on the MRT, will also be around at the Open House. There will also be a pop-up Knackstop store which will be selling cute transport-themed merchandise.

For students at Republic Polytechnic, the new Woodlands MRT station provides additional transport connections. For families, it is another means to reach Admiralty Park.

The Open House is organised by the Land Transport Authority.