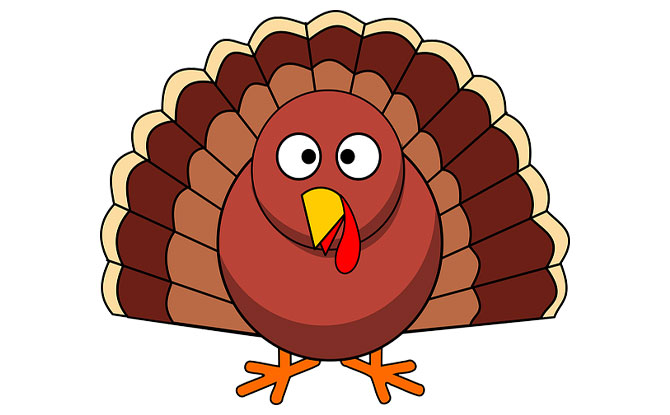 Turkeys are versatile animals that make a unique and iconic sound. They are popular animals on farms but they are also especially popular during periods such as Christmas or Thanksgiving. Here are some funny turkey jokes you can tell the next time the occasion calls for some.

65+ Turkey Jokes That Will Make You Go Gobble Gobble 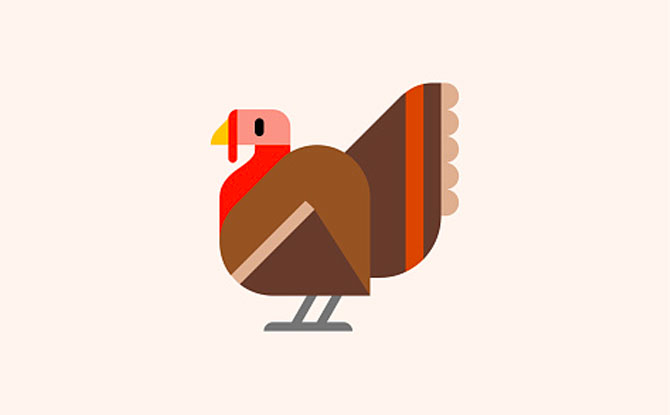 2. What do you call a group of Turkeys?
A Turkey Club

3. Why are turkeys fat?
Because they gobble

4. How do you unlock a door on Thanksgiving?
With tur-keys

5. What dessert did the Mama turkey make that the baby turkey loves the most?
Peach gobbler!

6. Do you know why Turkeys make good warriors?
Because they ain’t no chicken.

7. How is a chicken different from a turkey?
Chickens celebrate Thanksgiving!

8. What did the turkey sing before Thanksgiving day?
“I’m dreaming of a white Christmas.”

9. What is the best dance to do on Thanksgiving?
A turkey trot.

10. Who celebrates Thanksgiving in Canada?
All the turkeys that made it across the border.

12. What happens when Turkeys get the common cold?
They quit smoking.

13. What sound is made by a turkey in space?
Hubble, Hubble!

14. Which part of the turkey do drummers love the most?
The drumsticks!

15. How did the turkey drink wine?
With a gobble-let.

16. What were two English turkeys discussing on Thanksgiving day?
To be or not to be stuffed, that is the question.

17. If we get fruits from fruit trees, then from where do we get a turkey?
Poul-tree!

18. Why shouldn’t one look at the turkey dressing?
Because it will make him blush.

19. Why didn’t the turkey eat any food on Thanksgiving?
Because he was already stuffed.

20. Why do turkeys lay eggs?
Because if they dropped them, they would break.

21. What is the best key to a great Thanksgiving dinner?
A tur-key!

22. What do you call it when a turkey fumbles in a football match?
A fowl play!

23. If you cross a turkey with some corn and veggies, what do you get?
Enough food for Thanksgiving.

24. If a large turkey is called a gobbler, then what is a small turkey called?
A gobb-let.

25. What do turkeys make their streets out of?
Gobble-stones!

26. Why didn’t the turkey show up for the Halloween party?
Because the tailor couldn’t figure out how to make a gobb-lin costume.

27. What did the pregnant turkey say?
I’m stuffed.

28. What sound does a turkey with one leg make?
Wobble, wobble!

29. What did the mother turkey say when her naughty children were annoying her?
She said that if their father knew, he’d turn over in his gravy!

30. What happened when a turkey got into a wrestling match with a chicken?
He got the stuffing knocked out of him.

31. What side do turkeys have the most feathers on?
The outside.

32. What did the ghost put on the turkey on Thanksgiving?
Grave-y.

33. What did the mother turkey say before getting into the oven?
I’m stuffed.

34. Why did the turkey cross the road on Thanksgiving?
Because the chicken had Thanksgiving off.

36. What do you call it when you cross some leftover turkey with a pointy black hat?
A witch-bone!

37. What kind of key has legs but cannot open doors?
A turkey!

38. What do you call a turkey with carrot stuffed in its ears?
Anything you want to because it can’t hear you.

39. What do you call a sarcastic turkey?
A smirk-key!

40. Why can’t a turkey be taken to the Holy church?
That’s because they use fowl language.

41. Why do turkeys always say, “gobble, gobble!”?
Because they never learned table manners.

42. Why are turkeys not good at baseball?
Because they only hit fowl balls.

43. Why shouldn’t the turkey be placed next to the dessert?
Because it will gobble it up!

44. What is an offbeat turkey called?
A quirk-key!

46. What is a turkey called on the day after Thanksgiving?
Lucky.

47. What do you call it when a turkey lays eggs on top of a barn?
An eggroll!

48. What kind of weather is liked by turkeys?
Fowl weather!

49. How can a turkey be kept in suspense?
I’ll let you know tomorrow.

50. Why did the turkey pack her bags and leave the farm?
Because she was tired of all the fowl language.

52. Why are turkeys not good at baseball?
Because they only hit fowl balls.

53. Which animal needs no musical gear to march on a parade?
A turkey as it can march to the beat of its own drumsticks.

54. Why shouldn’t you let turkey go near kids?
Because they use fowl language.

55. When does a turkey go “mooooo”?
When it’s learning a new language!

56. Why was the turkey questioned by the police after the robbery?
Because the turkey got the stuffing knocked out of him by the robbers. 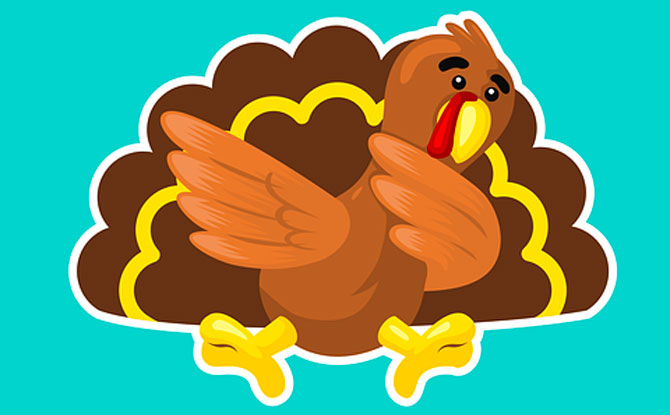 57. Knock knock!
Who is there?
Akhant.
Akhant who?
Akhant eat any more turkey, I’m full!

58. Knock, knock!
Who is at the door?
Dewey.
Dewey who?
Dewey have to roast the turkey any longer?

59. Knock knock!
Who is there?
Phillip.
Phillip who?
Phillip more stuffing in the turkey, please!

60. Knock knock!
Who is there?
Olive.
Olive who?
Olive the turkey stuffing!

61. Knock, knock!
Who is there?
Arthur.
Arthur who?
Arthur any Thanksgiving turkey leftovers?

62. Knock knock!
Who is there?
Tamara.
Tamara who?
Tamara we’re going to have turkey at Thanksgiving, yay!

63. Knock knock!
Who is there?
Esther .
Esther who?
Esther any more turkey left?

64. Knock, knock!
Who knocks?
Aidaa.
Aidaa who?
Aidaa lot more turkey than I should have.

65. Knock knock!
Who is there?
Avant.
Avant who?
Avant to have a delicious turkey like the one before! 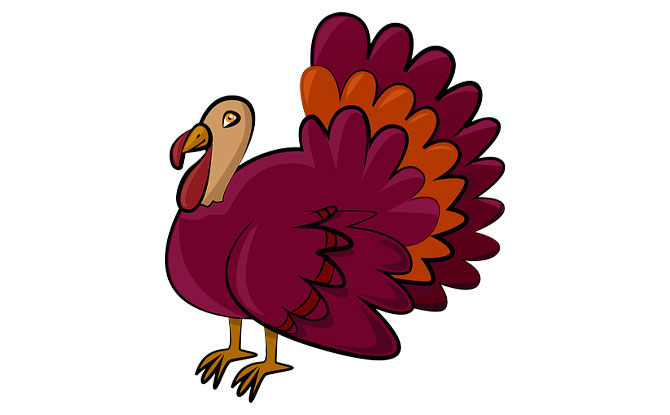 If you are interested to hear puns and jokes about turkeys, this is the place for you. Here are some funny turkey jokes that you are sure to remember and laugh at.

66. Two turkeys are looking at the sky at dusk. One turkey asks the other one – Do you believe in life after Christmas?

67. We trace hands to make turkeys. Quite a handy technique.

68. A lady was picking through the frozen turkeys for Thanksgiving, but she couldn’t find one big enough for her family.
She asked a stock boy, “Do these turkeys get any bigger?”
The stock boy replied, “No ma’am, they’re dead.”