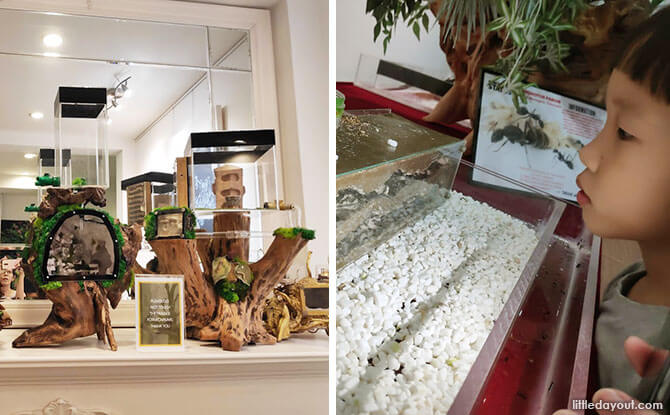 Singapore’s Ant Man Zat Low’s ant exhibition has finally landed a permanent nest at Upper Paya Lebar Road! No need to get all antsy about it, as the exhibition will not have an end-date. We visited The Ant Museum and it was fascinating, to say the least, to peek into the world of ants. 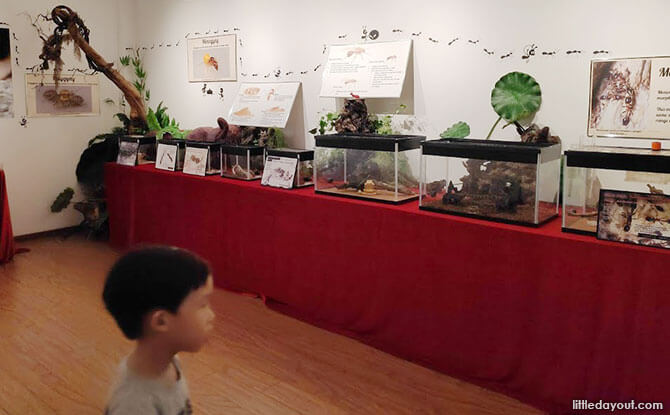 The Singapore Ant Museum is situated in a quaint shophouse at Upper Paya Lebar Road. It has two levels dedicated to Zat’s passions – ants and art about ants. Besides observing ants in their habitat – feeding, moving objects, cleaning their homes, you will get to see some of the 23 species of ants which can be found in Singapore. Among them, spot the world’s largest ant with its fearsome bite, Fire Ants, Weaver Ants and Trapjaw Ants.

Fascinating Facts We Discovered at The Ant Museum 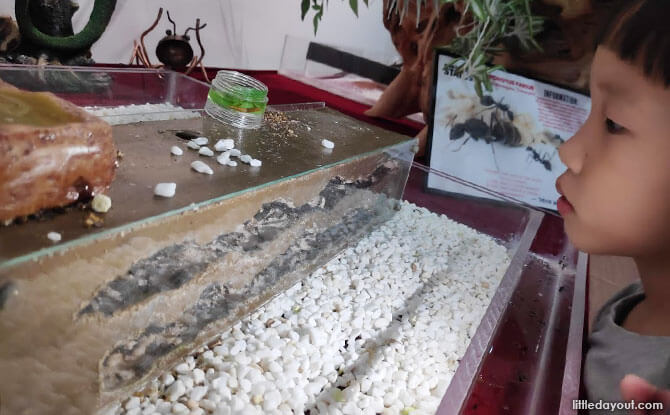 Keep your eyes peeled and ears open when you visit The Ant Museum. When we visited, guide Chris shared with us plenty of interesting facts about the ants. Surprisingly, there are many things to learn from the ants; even though ant are tiny, they exhibit many positive traits.

Ants are an incredibly neat creature. Most might think they are pests, “stealing” crumbs from our kitchen and leaving a trail. However, they are very organised creatures and are definitely no hoarders. Aside from having toilets in their nests (yes, they are clearly toilet-trained), they also have a rubbish dump outside their nests. They even carry fellow dead ants, waste and unwanted leftovers out of their homes and deposit them in a neat pile outside the nest. Marie Kondo would be proud.

Most Worker Ants Are… 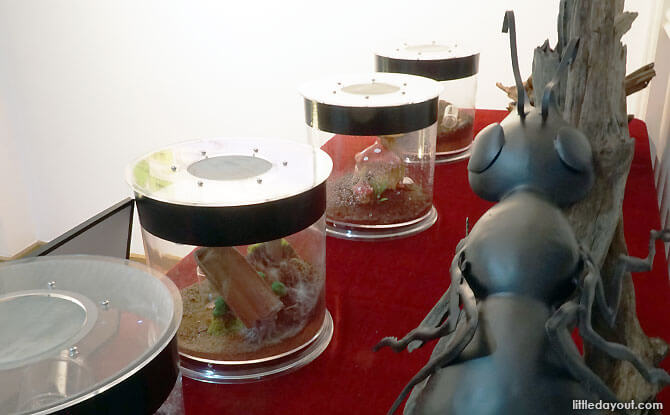 FEMALE. We don’t mean to be sexist but most worker ants are female. As the Queen ant is the founder of the colony, she lays female eggs. The sisterhood helps the smooth operations of the colony, ranging from caring for the queen, her eggs, waste disposal and policing conflicts. The phrase “Women hold up half the sky” rings quite true in this sense, doesn’t it?

Ants are Self-sacrificial and Altruistic 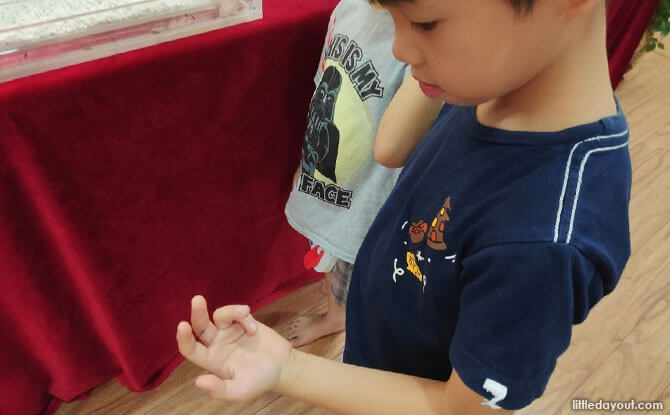 What would ants do if it suffered from a COVID-19-like crisis? When one ant is stricken with disease, it would go away from the colony and die alone, refraining from infecting the rest of the ants. It’s hard to believe such a small creature could exhibit such altruistic behaviour, placing community over self. 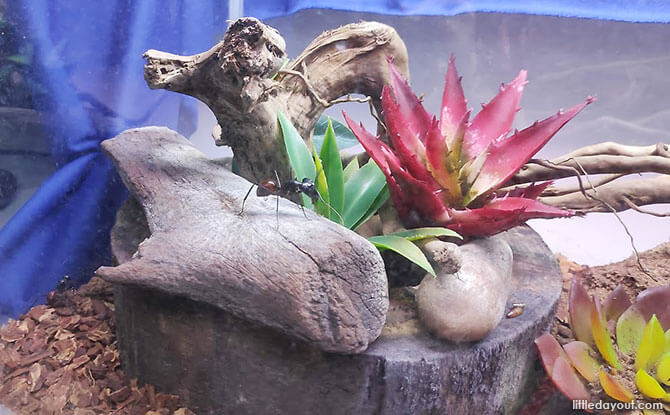 Ants eat almost everything. Food scraps, bits of insects, fruits, vegetables, worms – once food is identified, the ants leave a trail of pheromones leading other ants to the food. The food is shared and any leftovers go to the rubbish pile.

Ants can play a mean Game of Thrones 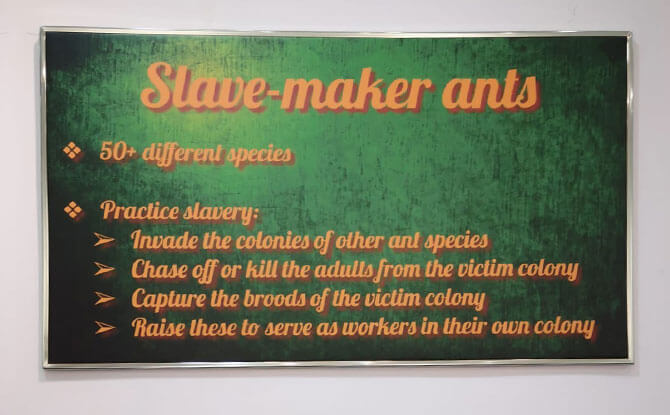 Heard of slave-makers? No, I’m not talking about mums but I’m talking about their ant counterparts – the Queen ant. There are over fifty species in the world which are slave-maker ants. Queen ants creep into colonies, kill the queen ant of the colony and basically take reign over with a false scent on its body. It then raises the existing worker ants to do its bidding. 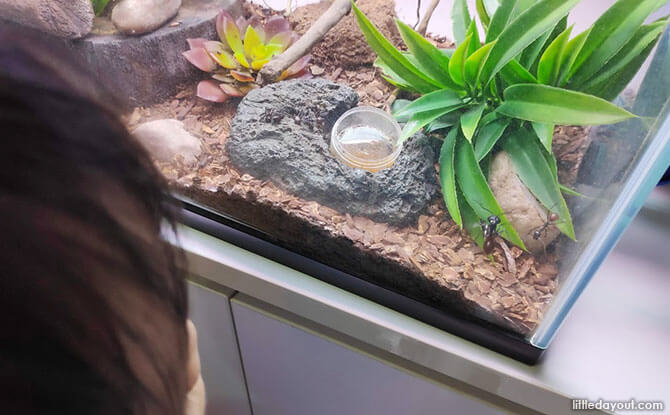 If you managed to spot the world’s largest ant – the Giant Forest Ant or Dinomyrmex gigas, at the Singapore Ant Museum, spot its major with a large head and jaw-like mandibles. It bites hard! One bite from this ant is very, very painful and can land you in hospital.

Ants can Go Hungry for At Least a Week

Ants are the Best Way to Test your Pet-keeping Skills 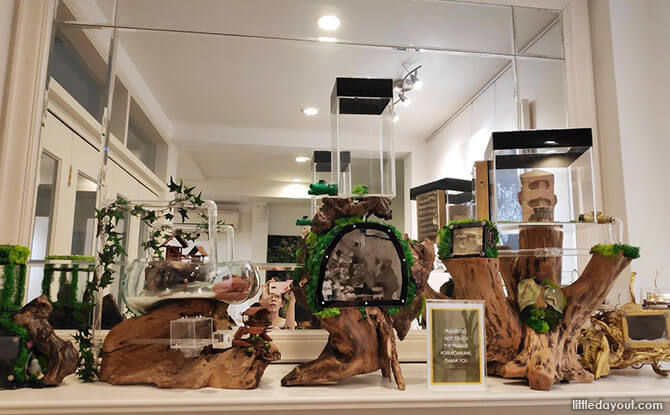 If your child keeps asking for a pet, try getting him or her to raise ants as pets! Technically ants are the easiest pets to keep. They do not need food constantly and can be pretty much left alone since they are self-sufficient creatures. They do not need much care and certainly do not need to be toilet-trained. If the attempt to keep ants alive fail, you should probably be denying that pet request!

The Artsy Bit about The Ant Museum 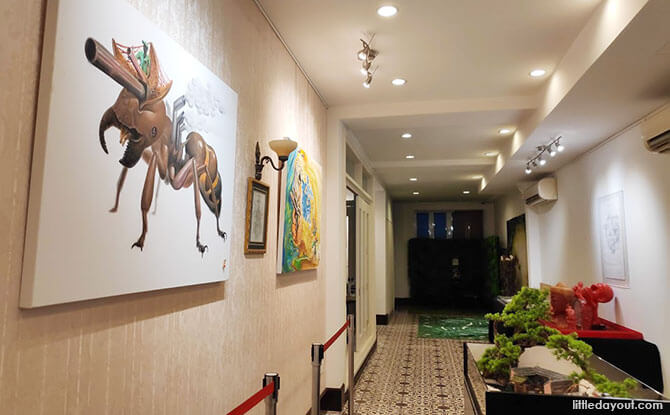 After seeing the ant species on the second level, you would want to see Zat’s artwork on the first floor of the Ant Museum. As Zat is a prolific artist, you would see many of his paintings on ants, diaorama and lovingly created formicarium on display. Many of the sculptures and paintings are abstract with elements of Zat’s beliefs interwoven with drawings of various species of ants. 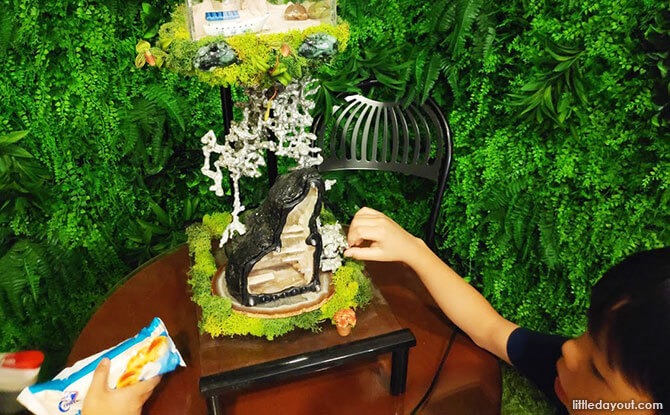 If you’re curious about the natural structures of tunnels in an ants’ nest, check out the casting of tunnels filled with molten aluminium! They have also become part of an art piece at the museum. Look out for one interesting pet at the museum which is not an ant, but a pair of conjoined twin turtles! 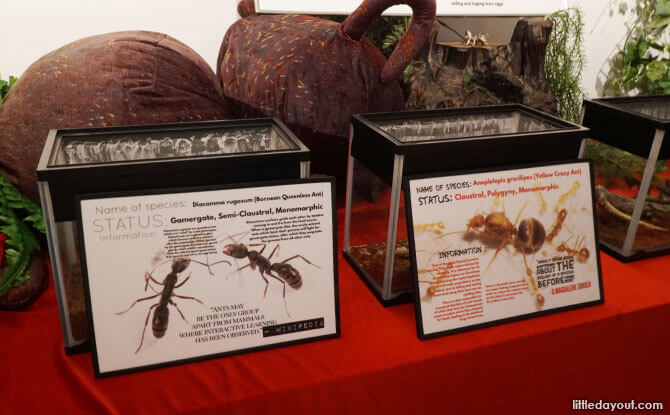 Even kids with ants in the pants would really enjoy visiting the Ant Museum. There was much to see and learn, and it will turn into an educational trip even for the adults. Though ants are one of the most commonly seen insects, there is much to learn about their behaviour and characteristics by just taking a closer look.

Do note that all visits to the Ant Museum are by appointment only. Each guided visit will last about two hours and the museum is thoroughly cleaned and disinfected after every group visit.

For more information and to make an appointment, refer to this site.