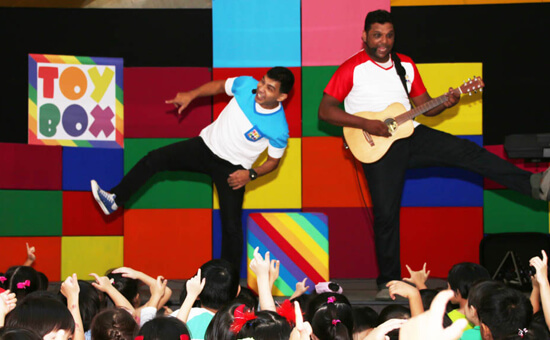 The Amazing ToyBox will be holding their annual Christmas show, Christmas is Here!, featuring live music, puppets, costumes, comedy and storytelling from 30 November to 1 December 2013.

The Amazing ToyBox was formed by Reuben Tupaz and Mark De Silva, former preschool teachers, in 2005. Composing their own original songs and writing their own scripts, their performances also feature characters they have created such as Sheriff Bobcat Buckles and insect adventurer Abby Ant.

The Christmas show is the culmination of a year of music and movement classes, school tours and storytelling session that have been conducted with children between the ages of 1 to 6 years old.

What can be expected at the Amazing ToyBox Christmas Show? Reuben says, “Of course, like with every ToyBox show there will be lots of dancing, stories, costumes and merrymaking.”

Christmas is Here! takes place at the Mountbatten CC Theatre from 30 November to 1 December 2013. Tickets priced at $26 and early bird tickets are on sale at $22 till 1 November 2013.

More details can be found here.