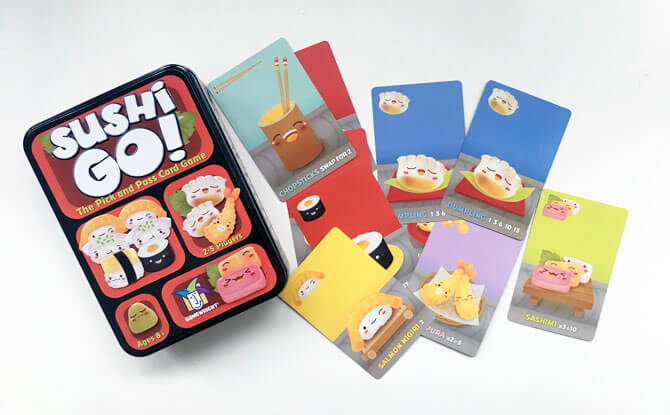 Sushi Go is a bite-sized card game recommended for kids aged 7 years old and up. With cute pictures and quick game play, it will appeal to children and even has a small component of Math thrown in too. 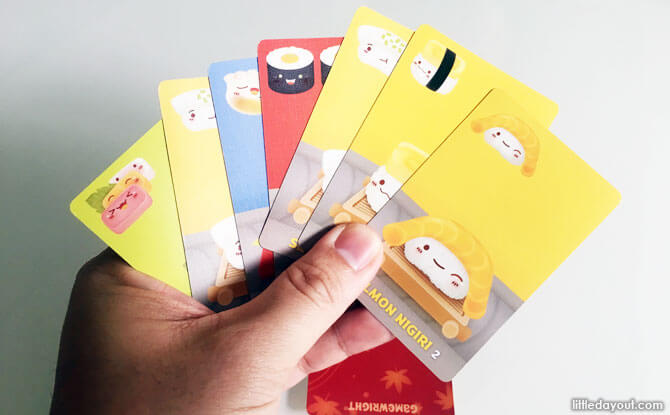 Sushi Go is a game set in a sushi restaurant.

To start off, every player receives a set of cards. These cards represent what is available to each player on the “sushi conveyor belt”.

From the deck of cards, every player chooses a card to “take off” the conveyor belt. These include sushi cards, sashimi cards, tempura cards and more.

After picking the card they want, the remaining cards in the person’s deck then get passed to the person on the left. Simultaneously, the player receives a new set of cards from the person on the right. This represents the movement of the sushi conveyor belt and the picking process starts again.

Sushi Go is a pick and pass game. In geek speak, it is also known as a drafting card game.

Each card comes with its own points. Some cards have conditions which need to be fulfilled in order to be awarded those points. At the end of the round, each player tallies up his or her score. At the end of three rounds, the person with the highest number of points wins!

Some cards, for example nigiri sushi, have straightforward points. You get whatever is stated on the card. 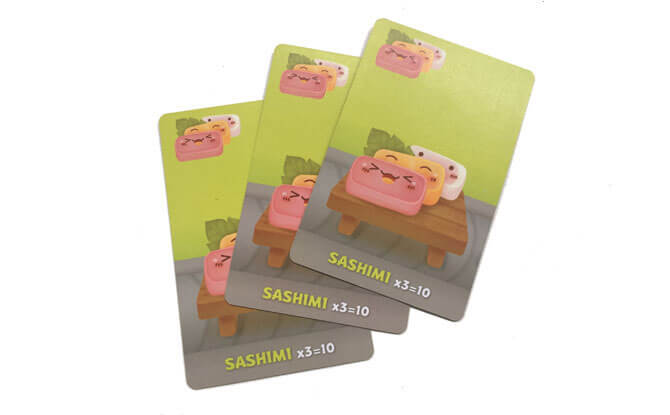 Others have conditions that need to be fulfilled in order to gain the points. For example, you will need to have three “plates” of sashimi before scoring any points. (After all, even in real life, one plate of sashimi is never enough.)

Or, if a player is collecting maki rolls, only the two players who “consume” the highest number maki rolls will receive points. 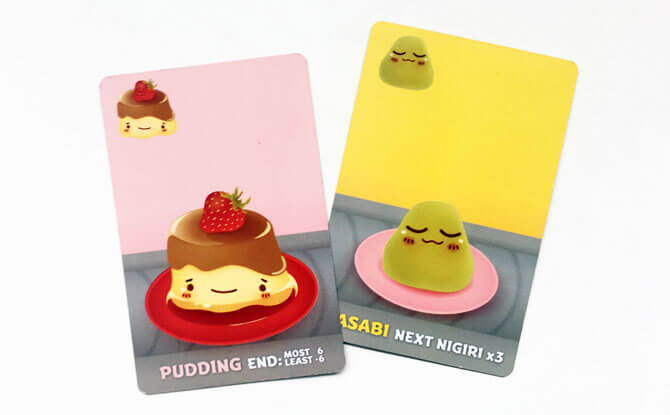 Each player has to strategise how to maximise his or her points. This is done by selecting the best combination of “food items” from the “conveyor belt” of cards that he or she receives. Strategies could include using special items such as wasabi (triples the points on the next nigiri sushi) or collecting puddings for dessert (+6 points if you eat the most dessert at the end of three rounds).

The Math component comes in when you have to tally up the points (or to keep track of your friendly competition’s points).

Sushi Go is a quick and enjoyable game to play with family and friends. Something to check out if you are looking for a bite-sized game to play.

SHOP: Get your copy of Sushi Go here!