Home Play Subscription Boxes In Singapore For Kids: A Review Of Curious Kits... 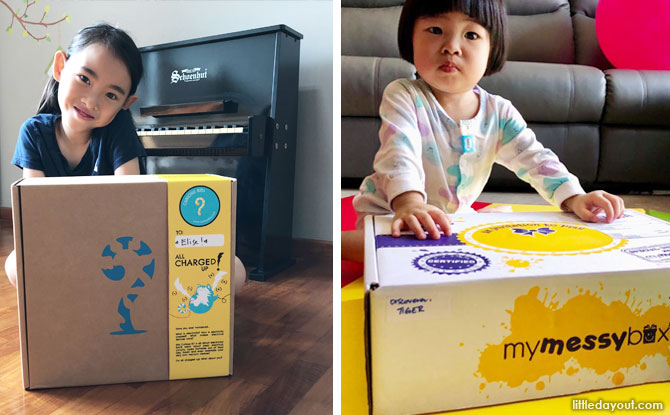 My daughter loves getting mail. But as an eight-year-old with just two bank accounts (hey, that’s one more than me!), there’s really not much addressed to her in the mailbox. So imagine her excitement when a huge box arrived one day, with her name on it! It was from Curious Kits, one of the few companies creating subscription boxes in Singapore for kids .

Scroll to the bottom to participate in our Giveaway! 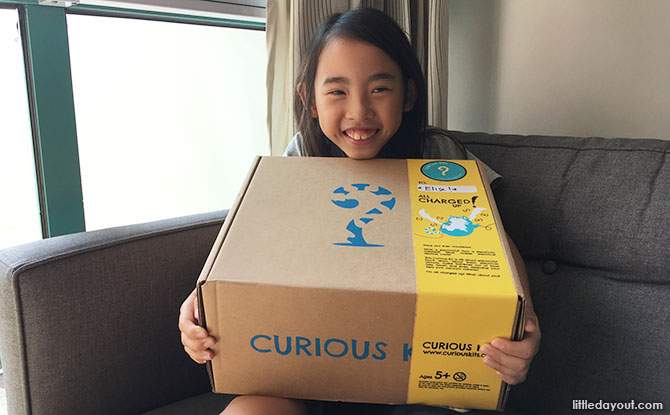 Having seen ads on social media about subscription box services from overseas, I had wondered how fun these boxes would be and if I could get the same quality from Singapore (#supportlocal). After searching online, I decided to try the boxes from Curious Kits and My Messy Box with my child and her younger cousins.

Review Of Curious Kits’ ‘All Charged Up’ Box Curious Kits is a fairly new set-up by two architects who gave up their computer-bound day job to bring hands-on fun to kids through monthly art and science boxes that encourage curiosity. These boxes are suitable for children aged six to 12 years old and are made for parents’ involvement to create bonding opportunities.

To subscribe, you can choose between a three- and a six-month plan. Of course, the longer your plan is, the less each box will cost. For those who are hesitant to commit to a subscription, there are single boxes for sale too. Curious Kits’ subscription boxes in Singapore for kids are designed according to the themes: Music, Gear, Space, Light, Animation, Detective, and Electricity. The one that my little science fan got was about electricity and boy, was she all charged up over it! We were amazed when we opened the box. There were four different activities on the topic of electricity inside! A note advises parents to attempt them in the order marked on each pack, to ensure that kids pick up the basic concept of electricity first before moving on to more complex activities. With this in mind, we started on the first activity: making an electrical circuit. Even before I was ready, the little one had sifted through the materials in the pack (everything was provided, including pliers and a screwdriver) and secured the battery holder onto the circuit board with screws, following the instructions in the accompanying manual! We were off to a good start! She needed some help from my husband and me to check that the connections were tight – we had to use the pliers in some instances. Other than that, she was able to install everything as stated in the manual.

See how delighted she was when she pressed the switch and the bulb lit up, accompanied by a “deeee” from the bell!

Included in the well-designed manual is a simple explanation of how an electrical circuit works, which I used to wrap up the activity.

When we visited my parents later in the day, we brought the electrical circuit along. The little one was excited to show her grandparents what she had made and even talked to her grandpa, who studied electrical engineering, about electricity! You know that game where you’re supposed to guide a metal loop along a length of twisty wire without it touching the wire? Yes, we made a buzz wire in our second activity in the ‘All Charged Up’ box!

Again, our little scientist readily followed the diagrams in the instruction manual. I helped her with bending the wire as it was a little tough for her while my husband fixed some loose connections in the metal loop wand, and we were ready for the buzz wire challenge!

How I wish there were such subscription boxes for kids when we were young! Learning science would have been a lot more fun! 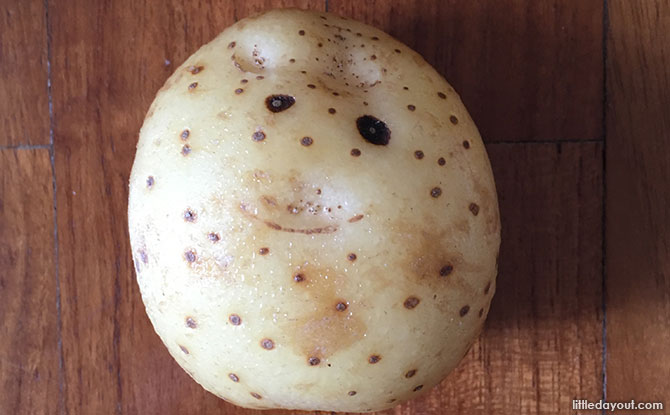 The third activity involved using potatoes to make a battery! That would have been exciting on its own, but our little one discovered a smiley face on one of the potatoes and became ecstatic! We connected wires to crocodile clips, inserted zinc and copper plates into three potatoes (which were not provided), attached the clips to the plates and voila! the LED light in the circuit blinked to life!

Next, we exchanged the light for a digital clock and time appeared on the panel! Success! A question at the end of the manual – ‘Can I use something other than potatoes?’ – got us intrigued. Father, mother and child couldn’t agree on which foods would make good batteries, so we kept the materials provided to experiment on other “candidates” in the future. 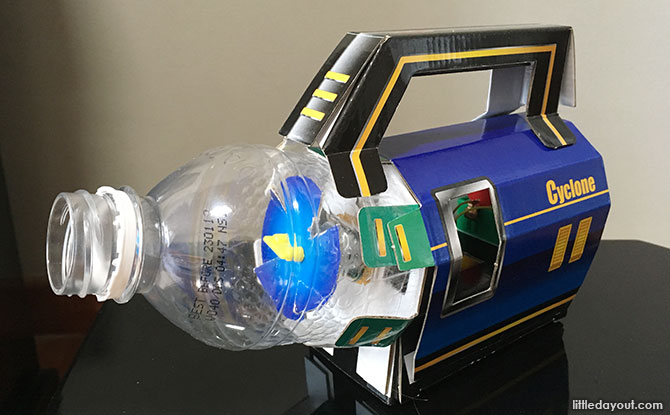 Finally, it was time to make the vacuum cleaner! It was indeed the most complex of the lot, as we had to make various parts ranging from the battery holder to the section with the motor and the external body.

The three of us worked diligently together – teamwork at play – and completed the product faster than we expected! The best part is, the little one volunteered to clean up after the project! My Messy Box provides sensory play-inspired subscription boxes for kids from one to five years old. Little ones can choose from these boxes: Explorers (for 12 to 18 months), Discoverers (for 19 to 24 months), Adventurers (for two to three years), Bloomers (for three to four years) and Experts (for four to five years).

The outfit was started in 2013 by an anxious dad, Jeff Lim, who had exhausted all available means of helping his son overcome his problems with focus and motor skills. He decided to come up with his own sensory play ideas, got early childhood certified teachers to help him realise them, and My Messy Box was born!

You can subscribe to My Messy Box’s three-, six- or 12-month plans, or purchase a single box. Subscribers will receive a surprise box with a different theme every month, with three or four activities packed in and ready for play.

Discoverers Box – The Tiger That Came To Tea

One of the subscription boxes in Singapore that we got from My Messy Box was for young children from 19 to 24 months old. My niece was just 15 days shy of reaching 19 months old when we brought the box to her. Her eyes lit up when the lid was lifted up and she saw the colourful items inside!

There was a whole tea set inside with a real teabag for brewing the drink, a tiger hand puppet accompanied by colourful pebbles and cards for a food-recognising game, and even a can of shaving cream and tiny pots of paint for making a stripey tiger! I asked the little cutie, “Do you want to play?” and she nodded her head eagerly. So, with the help of her mum, we started with the first game. The rules are simple: the adult reads out the word on a card, after which the child is to place a coloured pebble on the picture matching it. If the correct picture is marked, the tiger (hand puppet controlled by the adult) comes and gobbles up the food. Otherwise, the tiger shakes its head and refuses to eat.

The little girl had so much fun and was so tickled by the tiger! As she’s young, she didn’t get all the answers right. But this is one game that can be played over and over again, till she learns to recognise all the food items!

Next, we filled a basin with water, and put the teabag in. We demonstrated how to swirl the teabag and alerted the little one to the change in colour as the diffusion started. Then we handed the teabag to her to let her try brewing tea as well!

Time to serve the drink! Using the tea set provided, my little niece learnt how to pour tea from the teapot into the cups. She was so excited she couldn’t stop practising her new-found skill! This activity comes with a variation: you can add sensory beads (included in the pack) into the basin to let the child discover what happens when you scoop water and beads together using a strainer (provided).

The third activity in the Discoverers Box provided another avenue for a fun sensory experience – for adults and children alike! After her mum had fun spraying shaving cream on a tray, my little niece was tasked to spread it evenly using the tongue depressor in the kit, giving her the opportunity to feel the curious texture of the cream. Drops of orange and black paint were then added to the shaving cream and our little artist was guided to make strips of colour using a spoon. 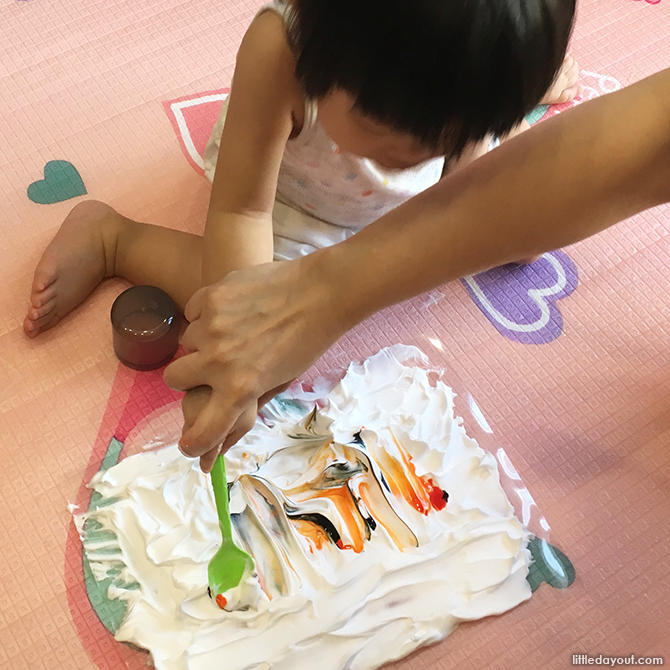 Her mum then placed the tiger cutout provided onto the colourful and creamy surface, and a masterpiece was created! Seeing how much fun this little one had, it’s no wonder subscription boxes for kids are quickly gaining popularity!

My Messy Box also had a surprise play kit for my elder niece, who’s four and a half years old. ‘Bones & Us’ is the theme for this month’s Experts Box, and she was treated to three cool activities. This activity pack was loaded with materials such as black sesame seeds, fairy lights, skeleton toys, and an ice cream stick skeleton puzzle. All we had to do was to pour a thin layer of sesame seeds into a clear container, place the fairy lights under it, and have the child dig to reveal the lights or scratch out words with the toothpicks provided.

The use of sesame seeds is a good move as it stimulates many of our senses, including sight, touch, smell and even sound!

Creative Play – Getting An X-Ray 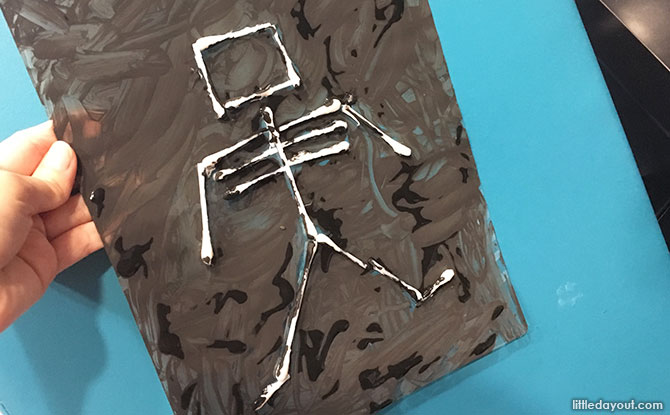 Using simple materials like cotton buds, a clear plastic sheet and black paint – lots of it – we were able to create an X-ray-inspired piece of artwork in this second activity with the older niece. We could see how she was focusing on glueing and painting. It looked so fun that my eight-year-old couldn’t resist joining in! 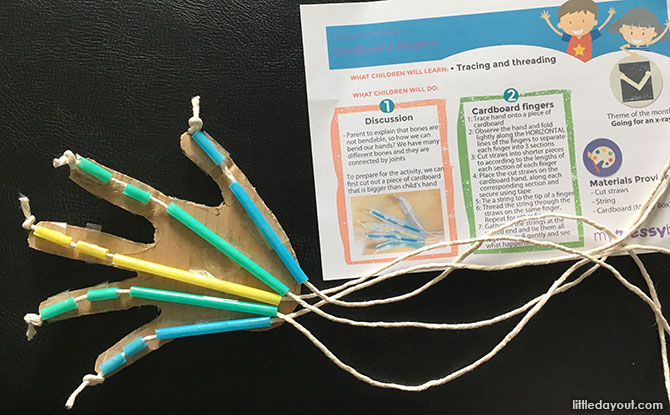 Although this box is created for four- and five-year-olds, its contents can be attractive to older children as well. My daughter had a go at making the cardboard fingers craft and was totally immersed in the cutting, sticking and knotting. Essentially, she traced her palm on the cardboard (the box itself), cut out the shape, and fixed straw segments onto the fingers to simulate the structure of our bones. Running a piece of string through each set of finger bones, she was able to demonstrate why our fingers can bend even though our bones can’t. If this craft was attempted by the 4.5-year-old, more adult involvement would have been necessary. Either way, the outcome would have been the same: happy kids having fun learning through play!

That’s the beauty of these subscription boxes for kids.

Little Day Out is giving away: One Curious Kits’ ‘All Charged Up’ Box

This contest has closed. Congrats to Karen T!

Monster Trashemon Bins Are Popping Up Around SG. Here’s Why You...