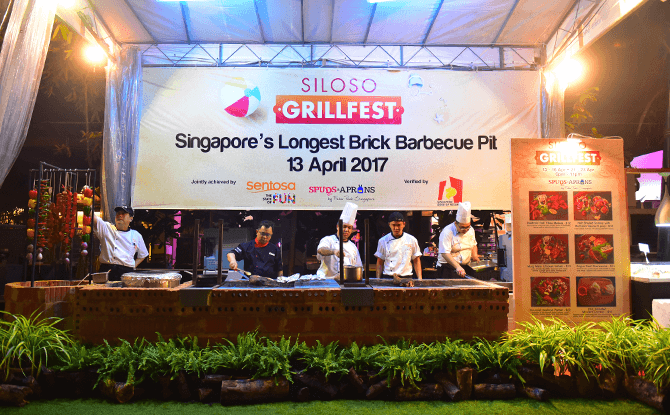 Barbecues and beaches make the perfect combination. At the Siloso GrillFest, you get to enjoy both under the stars at the Sentosa’s hip Siloso Beach.

Taking place over the Friday to Sundays of 13 to 16 April 2017 and 21 to 23 April 2017, you will find close to 1 km of pop-up food stalls offering barbecue delights, sides and more at Siloso GrillFest.

At the opening of Siloso GrillFest on 13 April 2017, the event was also officially recognised as having Singapore’s Longest Brick BBQ Pit by the Singapore Book of Records.

The barbeque pit is approximately 4.9 metres long and 0.9 metres tall. It is made from around 310 bricks and took a team of five around seven hours to complete. It can hold an amazing 200 sticks of satay on the grill or 2 herb roasted whole lamb, each weighing 15 kilograms.

Singapore’s longest brick barbecue pit is fired up with charcoal and apple wood chips have been added to produce a smoky flavor for the meats.

Siloso GrillFest is one of the F&B promotions being held at Sentosa in the month of April.

Other events include Easter treats at Sabio by the Sea, Quayside Isle from 15 to 16 April 2017 where little ones at can dine for free and get crafty with an Easter Egg Colouring Contest and Easter Cookie Bake-out, and dining at the newly-launched Sessions at Hard Rock Hotel Singapore on 16 April 2017 with face painting activities, a movie screening session as well as a creative hands-on Easter Sweet Creation competition at the Sessions cooking studio.

READ: KidZania Goes to Plaza Singapura from 14 to 23 April