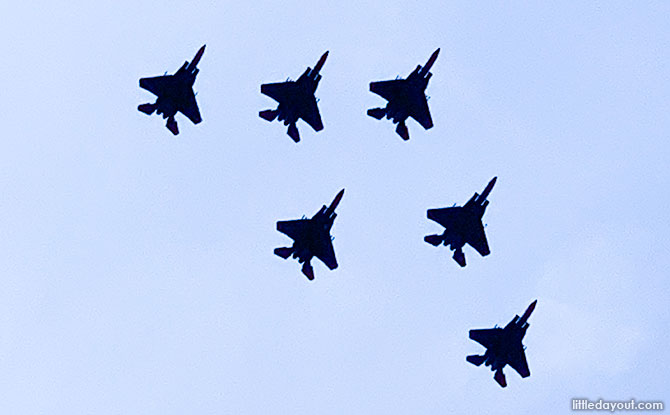 Six F-15SG Eagles will fly over Singapore on 9 August 2020 in a tight delta formation as a salute to frontline and essential workers in the Roar of Unity for NDP 2020.

The fly past of the fighter jets is part of the morning segment of the National Day Parade on 9 August 2020. It is intended to symbolise the unity of Singapore as one people and nation.

The Roar of Unity by the F-15SGs follows after the State Flag fly past at the Padang by the Republic of Singapore Air Force’s (RSAF) Chinook and Apache attack helicopters.

The F-15SGs will overfly healthcare institutions across the Singapore and make a circuit around Singapore.

Tribute to Frontline and Essential Workers

This first segment is expected to take around seven minutes.

In the next part of the Roar of Unity, the six fighter jets will make three loops around central and western Singapore with a flight time that is expected to last slightly over 20 minutes before returning to Paya Lebar Airbase.

You can watch a video of the flight path below.

Take Part in a Fly Past NDP Contest

In addition, RSAF is holding a contest in conjunction with the NDP2020 Fly Pasts.

Take a picture of yourself watching and waving at the NDP 2020 Fly Past and send it via direct message to the RSAF Facebook page for a chance to win RSAF LEGO Kits. Contest closes at 11.59 pm on 10 August 2020.