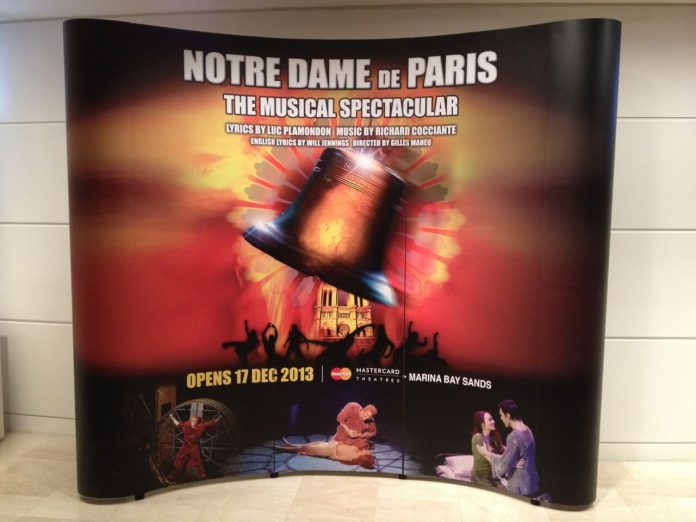 The haunting strains of “The Age of the Cathedrals”, the opening number in the musical Notre Dame de Paris, filled the Marina Bay Sands elevator as it descended to the lower floors.

Glancing over my shoulder, I identified that the sweet humming was from a young lady of no more than 12 years of age. It was already 10.45 pm and all of us had just trooped out of the 2.5 hour-long performance at the MasterCard Theatres – Grand Theatre.

French lyricist Luc Plamandon made no apologies for this as he said, “it’s a well-known story which stands up on its own and doesn’t need to be explained.” The story is emoted entirely through lovelorn ballads, arias of operatic beauty and energetic rock resonance.

As result, we found ourselves at times straining our ears to catch the lyrics rather than appreciating the beauty of the music composed by Richard Cocciante. While the original musical was written in French by Luc Plamandon, the returning Singapore version features, for the first time here, the English lyrics by Will Jennings, Oscar-winner for “My Heart Will Go On” from the smash-hit film Titanic.

Based on Victor Hugo’s French Gothic novel Notre Dame de Paris, which was published in 1831, the musical first premiered in Paris in 1998 and has been staged over 4,000 times in 20 other countries.

In a story that takes place mainly around the famed cathedral of the same name, beautiful Esmeralda captures the hearts of many men, including that of street poet Gringoire and hunchback Quasimodo. She is also the object of desire of priest Frollo and soldier Phoebus, who both flip-flop in their fierce struggle between lust versus faith and loyalty.

The musical exposes audiences to a gothic melodrama from a different era and deals with mature themes of religion and class. Unlike Disney’s animated version of The Hunchback of Notre Dame, the rowdy crowd scenes of the refugees set to uptempo rock beats and the sight of Gargoyle creatures on pillars at the musical bring the themes of cruelty and damnation up a notch.

The stage features a 12-metre high ‘climbing wall’ which changes from being the façade of the grand cathedral of Notre Dame to the famous Bastille prison in Paris. This is where we where we see dancers and acrobats masterfully performing amazing feats, scaling the walls and twirling themselves to ring three large suspended bells.

Under the avant-garde directorship of Gilles Maheu from Cirque du Soleil, the show is not just an emotionally charged ‘songfest’ between the seven principal artistes, but also a visual spectacle with fantastic stunts by 24 skilled dancers and acrobats. This highlights of the show are the gorgeous gymnastics, contemporary dance and energetic acrobatic somersaults choreographed and well woven into the story by renowned dance visionary Martino Muller.

At the close of the musical, the street poet Gringoire delighted the audience with the original French version of the opening song. With this music etched into her mind, it was no wonder the little girl in the elevator was left humming away its refrain as she left the theatre.