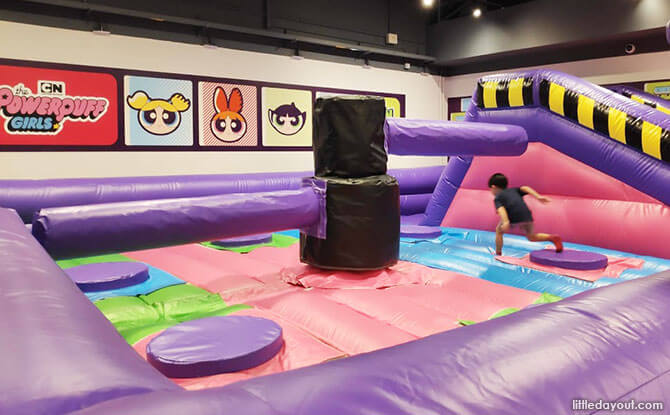 Spend and redeem play time at the recently refurbished Play! by KinderPlay indoor playground at Changi Airport during the March school holidays 2020 in Singapore. There are also Trolls World Tour photo opportunities at the Terminal 3 public areas.

From 6 to 8 March, 13 to 22 March and 27 to 29 March, spend a minimum of $50 (or $80 in supermarkets) in a single receipt from participating retail stores and Food & Beverage outlets at Changi Airport’s Terminal 1, 2, 3 and 4 public areas to redeem two slots of 30 minutes playtime at the Play! by KinderPlay indoor playground.

Play! by KinderPlay is located at Changi Airport Terminal 3 Basement 2. Previously a Mr Bean themed playground, it has been recently refurbished and updated with a Cartoon Network theme featuring characters such as Powerpuff Girls and Ben 10.

Participants are required to wear socks to enter the indoor playground. Alternatively, socks can be purchased for $3 at the counter. Details and terms and conditions for this promotion can be found here.

From 13 to 29 March 2020, there will also be Trolls World Tour Photo Spots around the Changi Airport Terminal 3.

A Trolls World Tour Boom Box will be located at Basement 2, opposite Kopitiam, while Poppy’s Hot Air Balloon can be found at the Departure Hall, near the Linkbridge to JEWEL.

There will also be Trolls World Tour Character Photo Spots at Terminal 3 Basement 2, ST3PS, and screenings of the Trolls Movie.

Other Promotions during March school holidays 2020 at Changi Airport

In addition, a minimum spend of $50 (or $80 for supermarkets) in a single same day receipt will also allow for the redemption of one $20 credit of T@PZ Voucher for use at the Zone X amusement centre at Changi Airport Terminal 3. This is limited to first 300 qualifying customers.

There are also Changi Gift Cards available for redemption with a minimum spend with Mastercard.

For more details on what is taking place during the March school holidays 2020 at Changi Airport, and terms and conditions, visit the website here.